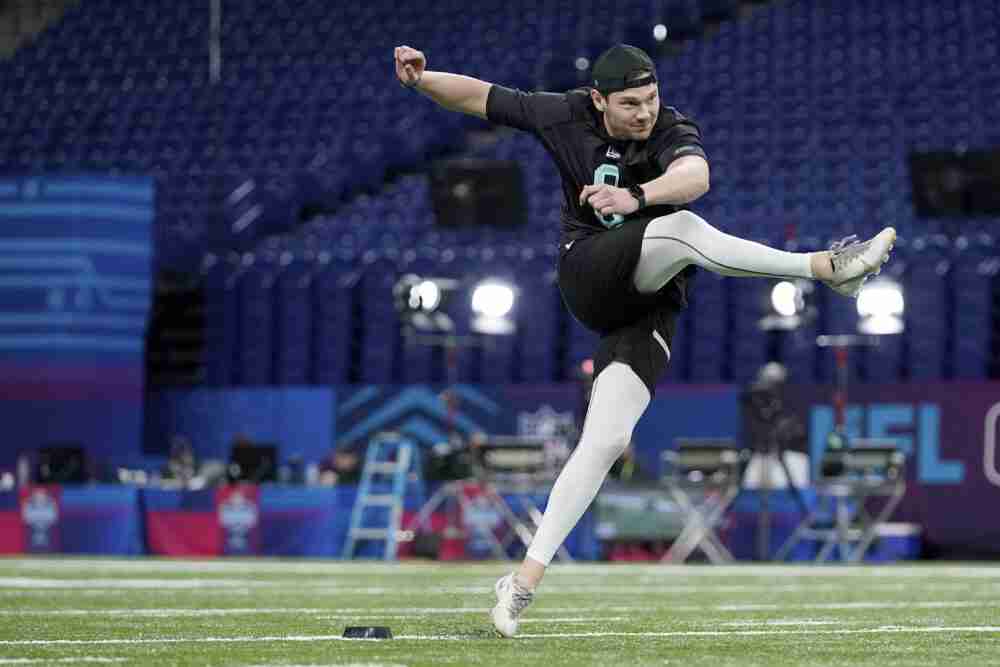 Cade York has the right leg NFL teams covet in a kicker.

“He’s built more like a punter because he’s tall and he’s lean and he’s powerful,” former LSU special teams coordinator Greg McMahon told The Chronicle-Telegram in a recent phone interview. “And, boy, he hits the ball up high and leg strength is absolutely a strength of his.”

York (6-foot-1, 206 pounds) is much more than a lethal limb, and the entire package is why McMahon gave the highest recommendation to longtime friend and Browns special teams coordinator Mike Priefer. The Browns listened and drafted York out of LSU with pick No. 124 in the fourth round April 30.

“And that’s why I told Mike, if I were to go back to the National Football League, I would absolutely draft this guy. Because I’ve seen this guy figure things out.”

The Browns are counting on York to find solutions in a hurry. They cut Chase McLaughlin and Chris Blewitt last week after the draft and won’t have competition in training camp for York, who went 54-for-66 (82 percent) for his career at LSU.

The Browns have been searching for a long-term answer since Dawson’s 14-year run ended in 2012. They identified York as the best in the draft, didn’t want to lose him to another team and made him the earliest kicker drafted since Tampa Bay took Robert Aguayo in the second round in 2016.

“Realized that is a little high for where kickers typically go, but we do think that he is an excellent prospect and has a good chance to be a good kicker for a long time,” general manager Andrew Berry said after the draft. “Honestly, kicker has been a spot that we have monitored for several drafts. Having a young, high-potential specialist on a rookie deal is something that is valuable and important to us.

“We all know in this room how difficult it is to kick here in Cleveland. Cade we certainly think has the raw talent to do so.”

And the work habits.

“I learned from veteran kickers, pregame is to figure sh** out. And he figures it out,” said McMahon, who coached 11 years with the New Orleans Saints. “He’s got a lot of talent, he’s got the mental makeup and he’ll pay due diligence in that stadium to figure things out. When it’s a windy, blustery day, he’ll take advantage of that in the offseason. He’ll take advantage of that in season. He’s gonna go out there and work at it.”

York will be on a team with playoff expectations in a division filled with guys who’ve made important kicks in the NFL. Baltimore’s Justin Tucker has the highest field goal percentage and the longest field goal in NFL history, Pittsburgh’s Chris Boswell has the fourth-highest percentage despite working in the difficult conditions of Heinz Field and Cincinnati’s Evan McPherson made two walk-off winners in the playoffs last season as a rookie on the way to the Super Bowl.

York will be the new kid on the block but he’s no stranger to pressure. He replaced Cole Tracy — the most prolific kicker in college football history — and helped LSU to a national championship as a freshman. He went 15-for-19 from 50 yards during his three-year career, including a 57-yard winner in the fog at Florida.

“I think it prepared him. This guy’s made big kicks,” McMahon said. “That year we won the national championship, we were in a freaking war at Texas, a freaking bloodbath, and he made big kicks for us.

“As far as having the moxie and the routine and all those things, this guy’s a good player.”

Priefer spent time with and worked out York during the draft process, and the Browns came away convinced he can handle the pressure of the NFL and the elements of FirstEnergy Stadium.

“Cade is a guy who we like his mental makeup — that is a big part of it — and we really like his overall talent level for kicking in an outdoor stadium,” director of player personnel Dan Saganey said.

York worked on his mental approach at LSU with help from McMahon.

“It is not necessarily trying to eliminate pressure because one of my favorite quotes is ‘Pressure is a privilege.’ It is just knowing that you are going to have times when you feel pressure, but it is making sure that your body can take over, you go back to muscle memory in those moments and your mind does not take over,” York said after being drafted. “It is just doing the best that you can in certain situations to have a certain thought process that allows your body to take over and you do not start having a bunch of negative thoughts.”

McMahon stressed that for a kicker mental strength is as important as technique and leg strength. His focus with York was not being consumed by a miss.

“I said, ‘You can never let your greatest strength become your greatest weakness,’” McMahon said. “He’s a perfectionist and he’s very driven and at times can be hard on himself. I said, ‘I don’t think that’s a good place to be, because perfection doesn’t live on this Earth. It doesn’t, you just gotta be damn good. So don’t be so hard on yourself. Just keep your body composure, keep your body language and just go on to the next kick.’

“And that’s easier said than done, but he consciously worked on that.”

“I do not want to peak as a rookie. I want to peak 10 years down in my career,” he said. “It is just living in the moment and knowing that you do what you can to succeed and then growing when you make a mistake. It is not the end of the world, it is just moving on and getting better.”