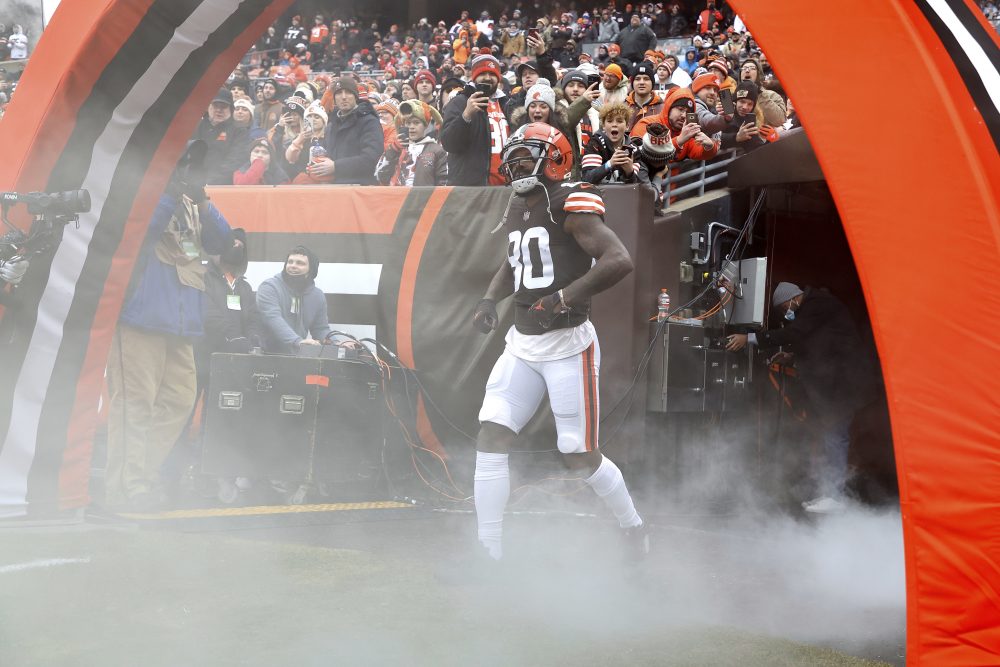 Landry, a five-time Pro Bowl receiver, reached agreement Friday on a deal with the New Orleans Saints. Landry grew up in Louisiana and went to LSU. The Saints will play the Browns at FirstEnergy Stadium on Dec. 24.

NFL Network reported the deal’s expected to be for one year and worth up to $6 million.

“HOME !!! WHO DAT NATION SEE YOU SOON,” Landry posted on Instagram with a highlight video of his playing days in high school and college.

He began his NFL career with the Dolphins but spent the last four years with the Browns after being acquired in a trade. He helped changed the culture within the organization, earned the respect of coaches and teammates and was productive (288 catches, 3,560 yards, 12.4 average, 15 touchdowns). The Browns cut him in March to save nearly $15 million in salary cap space and cash.

Landry and the Browns remained open to a reunion, but after the Browns chose not to pay the last year of his contract, the circumstances would’ve had to align for him to return. Plus, the Browns traded for No. 1 receiver Amari Cooper and drafted Purdue’s David Bell at No. 99 in the third round.

Running back Nick Chubb said he was “100 percent” sorry to see Landry leave.

“That’s my boy,” Chubb said at his youth football camp at Benedictine High School. “He’s been here since I’ve been here. We came in together, so we’ve been through everything together.

“A great teammate, great person. I won’t be playing with him anymore, but he’s still one of my best friends, one of my brothers, so that won’t change from that perspective. He’s a great player and they got a good guy down there in New Orleans.”

Many other former teammates showed support on social media.

Landry’s deal with the Saints was reported less than an hour after the Browns concluded their first rookie minicamp practice. Bell shares many of Landry’s qualities — strong hands, savvy route-running, attention to detail — and will be expected to fill at least a portion of the sizable void.

Bell (6-foot-1, 212 pounds) caught 232 passes for 2,935 yards, a 12.7 average and 21 touchdowns in three seasons with the Boilermakers. Coach Kevin Stefanski was impressed by the film and made that known during the predraft process.

“I know our coaches, our scouts and everybody was excited about him,” Stefanski said after practice. “He does not say a lot. He is pretty reserved, but he is very intelligent, did a nice job with what we gave him today and I expect him to continue to take strides every day.”

The Browns believe Bell has the versatility to play outside and in the slot, where they’re excited to use his size.

“I do think he has a natural competitiveness both in route-running and in route-catching,” Stefanski said. “The ability to make contested catches and the ability in the route-running game to set people up, drop your weight and those type of things.”

Bell and Landry have something else in common: less speed than desired. Landry ran a 4.77-second 40-yard dash at the scouting combine, causing him to fall to the second round in 2014. Bell ran a 4.65 at the combine and a 4.71 at his pro day.

Bell compensates in other ways and knows he has support from the Browns, beginning with Stefanski.

“It means a lot,” he said. “To have the coaches’ trust, I know I’m going to have to continue to build that out here making plays, how I walk through the facility and how I treat people.”

Bell estimated he played in the slot about 15 percent of the time at Purdue and likes it.

“It gives you a little bit more freedom. You really don’t have that defender right up in your face, he’s about 5 to 6 yards off,” he said. “So you can get him on this toes and have a lot more space to create.

“So it’s definitely something I’m looking forward to just to find ways to get open to give me the ball.”

Bell was the 16th receiver drafted, which could be difficult to accept for an All-American and the Big Ten Receiver of the Year — ahead of Ohio State’s Garrett Wilson and Chris Olave and Penn State’s Jahan Dotson, who went in the first 16 picks of the draft.

“No, no, I don’t wish I went a little bit higher,” Bell said. “God put me in this perfect situation, come to the Browns, be in a phenomenal offense, got a great run game, a great passing game and arguably the best quarterback in the league right now.

“So I’m just really looking forward for the opportunity to get out there and hopefully I have that chance to start at Week 1.”

The matchup with Landry and the Saints won’t come until Week 16.