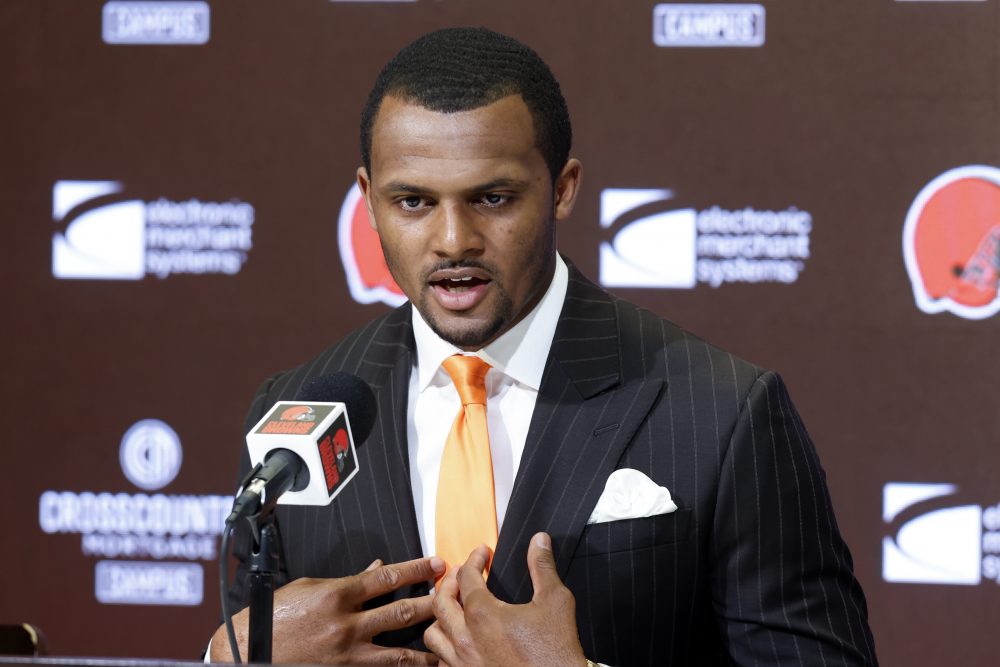 Deshaun Watson may be holing putts in paradise, but he can’t escape reality.

Fox 8 reported Watson will meet with NFL investigators again after being interviewed for multiple days earlier this week, and HBO announced it will broadcast a story Tuesday on “Real Sports with Bryant Gumbel” talking to several of the 24 women who’ve accused Watson of sexual misconduct.

Watson, the new Browns quarterback, is in the Bahamas with teammates and posted a video on Instagram of him sinking a long putt and screaming in celebration. He’s treating many members of the offense to the team-bonding trip that includes on-field workouts.


The NFL is conducting an investigation of the accusations against Watson to determine if he violated the league’s personal conduct policy. He’s subject to discipline, including a suspension, and the league hasn’t given a timetable for deciding or announcing any punishment.

The league hasn’t wrapped up its interviews with Watson.

“Remaining schedule is unclear but they clearly want to complete it sometime this summer,” Rusty Hardin, Watson’s attorney, told the Fox 8 I-Team.

The NFL’s discipline is independent of the legal system. Watson wasn’t indicted by two Houston grand juries and has denied any wrongdoing but still faces 22 civil lawsuits that aren’t scheduled to go to trial until March.

The league could make its decision when its investigation is concluded, wait until there’s resolution in the lawsuits or levy a punishment with the caveat it could add further discipline if new information surfaces.

The Browns traded for Watson on March 18, sending a net of five draft picks to the Texans and signing him to a fully guaranteed five-year contract worth $230 million, the richest in NFL history.

“Real Sports” will first air Tuesday night at 10. The news release about the episode says several of Watson’s accusers sit down for their first national TV interviews, detailing the alleged abuse and sharing their reactions to his contract. Soledad O’Brien is the reporter.

The Browns continue their voluntary offseason program next week with the start of organized team activities. Media availability is scheduled for Wednesday.