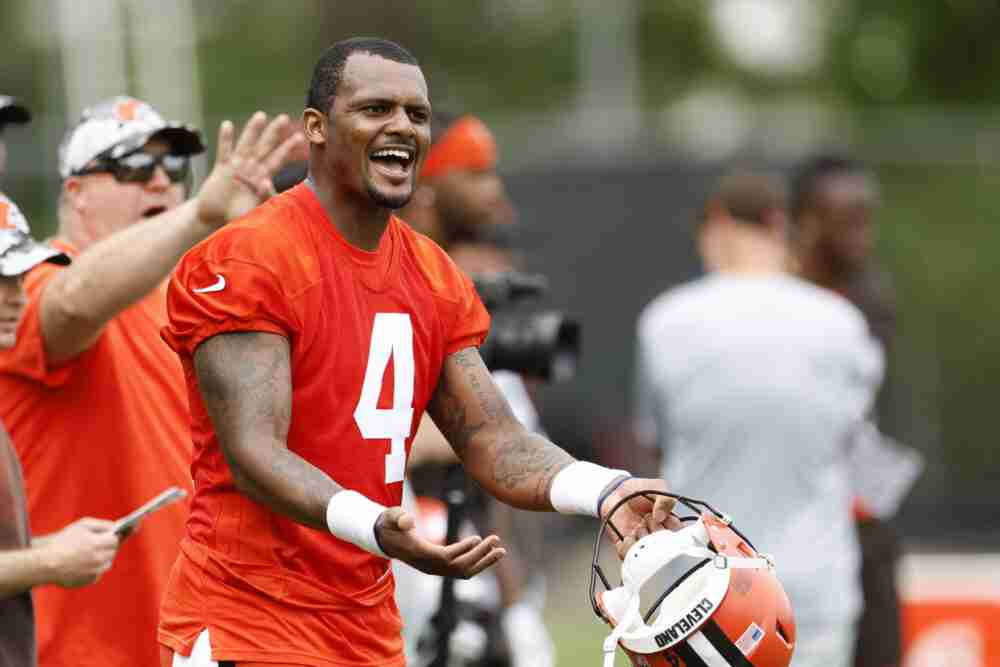 Deshaun Watson hasn’t talked to reporters since the introductory news conference March 25 but remains the primary topic of conversation regarding the Browns.

Whether it’s two of his accusers telling their stories on HBO’s “Real Sports with Bryant Gumbel” on Tuesday night, the NFL’s investigation of his alleged actions, his lawyers adamantly defending him, or his teammates praising his talent, leadership and generosity, Watson continues to generate discussion — positive and negative.

The quarterback participated Wednesday in the second session of organized team activities in Berea — his first practice in front of reporters — wearing short orange uniform pants, an orange No. 4 jersey and orange helmet with his name on the front. He wasn’t made available to reporters the day after the HBO report put crying faces with the accusations of sexual misconduct.

Two women describe their accusations against Deshaun Watson, while his lawyer asks “what evidence is there of any guilt?” in HBO interviews

“I read about it,” he told reporters after practice. “We did a lot of work on Deshaun the person and there’s legal proceedings ongoing, there’s an investigation ongoing, so I won’t comment much further than that. But we understand with respect to that it is something we’re going to be dealing with as these proceedings go on.”

Watson, who was acquired March 18 from Houston in a blockbuster trade, has strongly denied wrongdoing and wasn’t indicted by a pair of Houston grand juries. He faces 22 civil lawsuits that aren’t expected to go to trial until after the season, and Commissioner Roger Goodell said Tuesday the league is “nearing the end” of its investigation but gave no timetable for a decision on potential discipline, which could include a lengthy suspension.

With all of that swirling around him, Watson is learning a new playbook and trying to create chemistry with new teammates, including footing the bill for a trip to the Bahamas last week for more than two dozen members of the offense.

“Deshaun, like all of our guys, are professionals and when they’re here, we have a job to do,” Stefanski said. “And we try very hard to block out and leave outside outside and make sure that we’re focusing on the day-to-day tasks at hand when it comes to football.”

The “Real Sports” report included accuser Kyla Hayes calling Watson’s complete denial “a bold-faced lie” and accuser Ashley Solis questioning the grand jury decisions not to indict — “I don’t see how any of those human beings could have sat there in front of me and think what he did was OK,” she said.

Stefanski wouldn’t say if Watson addressed the team Wednesday about the broadcast.

“Respectfully, I’m not going to get into really anything that we talk about inside. I’d kind of leave that to the team,” Stefanski said.

“Nah, and I don’t think that’s any of our business,” Newsome said. “When he comes in here his job is football, not to tell us about his personal matters. He leaves those outside and he handles those with his family and then when he comes in this building we’re all about the work.”

“But I know every day he comes out and on the football field he’s the quarterback,” Walker said. “He’s locked in leading the offense and he’s done that every day since he’s been here.”

Watson, a three-time Pro Bowler who signed a fully guaranteed five-year, $230 million contract with the Browns, spent practice zipping balls to receivers Amari Cooper and rookie David Bell among others. The Browns viewed Watson as a significant upgrade over Baker Mayfield, got “comfortable” with him off the field and sent a net of five draft picks to the Texans, including three first-rounders.

“He’s been great,” running back Nick Chubb said. “The throws he makes are incredible. He’s definitely a special player. I can’t wait to work with him.

“He can create big plays. He’s a playmaker, so he’ll be able to do anything and everything on the field and be more electric.”

Watson has worked to fit in and establish himself as a leader. He contacted teammates and staff quickly after the trade, and the rookies when they were drafted, and put together the Bahamas trip that included on-field work and opportunities to build chemistry.

“I can just tell like it’s a different aura about him and you can tell he’s a great leader,” Newsome said. “He comes in the building, works every single day.

“But that’s the first thing I can say, he’s a great leader, great person.”

Chubb, a three-time Pro Bowler, joined Watson and the group in paradise.

“We all had a good time,” Chubb said. “He’s a great guy to be around. We all love him. He’s a natural leader. He’s been here since OTAs started. He took his own trip. I think those things bring in trust and bonding for our team.”

The distractions don’t appear to be going away any time soon, but the Browns feel Watson is prepared to handle them.

“He does a good job coming in every day and leaving outside outside and coming in and focusing on football while he’s here,” Walker said. “I can’t speak on anything else, but I know when he’s here, he’s locked in and happy to be back on the field and we’re happy to have him as our quarterback. He’s confident, looks good throwing the ball and I know what he does on gameday.”