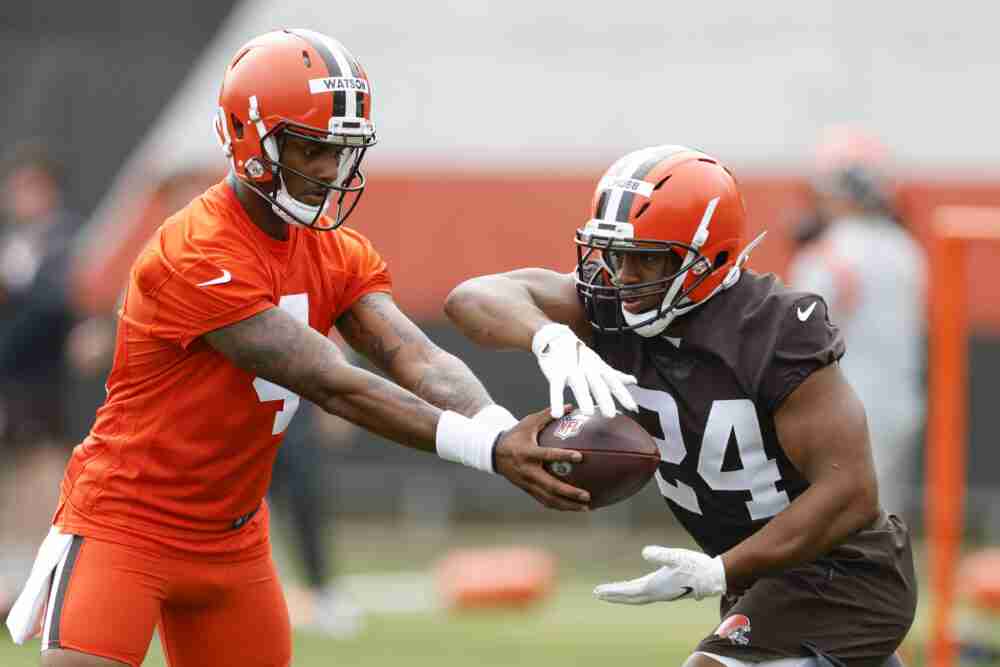 In case you hadn’t heard, the Browns are out on the field this week, throwing the old ball around in what is called an OTA.

As any acronym addict, or long snapper, can tell you, “OTA” stands for “Organized Team Activity,” which is another word for “practice.” But the “NFL,” which likes to label things, or attach Roman numerals to them to make them appear more important than they are, refers to these “practices” as “OTA’s.”

I know what you’re thinking: couldn’t an “OTA” or an “Organized Team Activity” also be another word for a “game”?

But this is Roger Goodell’s bean bag, so he makes the rules.

Therefore, the Browns are “OTA”-ing it out in Berea. According to league sources, the Browns, so far, look extremely “organized,” tremendously “team-ish,” and over-the-top “activity”-ready.

Those are all good signs.

Now on to the bad signs.

The team’s new quarterback, Deshaun Watson, in his Cleveland “OTA” debut, is doing his quarterback thing, while Baker Mayfield, the team’s old quarterback, is in parts unknown.

Mayfield, of course, since the Browns traded for Watson, is waiting for the other shoe to drop, which so far, it hasn’t. This makes it kind of an awkward “OTA.” Mayfield is still on the roster, but not on the field.

Many Browns fans, moreover, are still not on-board with the Watson trade, and Watson’s OTA presence because, well, if you don’t know why by now, you’re probably not a Browns fan.

This, then, stamps this particular OTA with a rather thorny vibe. Because traditionally, with all NFL teams, the passing of the quarterback torch goes much smoother when the passing is done so willingly.

The passing of the torch also goes much smoother when the discarded quarterback isn’t, you know, still on the roster, even if he’s not attending the OTA.

Additionally, the quarterback transition works much better, among the fans, if the keys to the offense aren’t being flipped to a quarterback with 22 civil suits waiting to be adjudicated, and an NFL commissioner pondering potential punishments once they are.

Maybe this year’s OTA should stand for “Oh, the angst.”

The unlucky head coach stuck in the middle is Kevin Stefanski. Will he ever, as coach of the Browns, get to experience a pandemic-free, drama-free OTA/training camp/regular season?

As it stands now, Stefanski and his staff are, among other coaching challenges, in the beginning stages of preparing a football team for the coming season, without knowing for certain who the team’s starting quarterback will be when the season begins.

If the starting quarterback isn’t THE STARTING QUARTERBACK, how long will Watson, Stefanski, and the rest of the team have to wait until the $230 million man is available?

Until then, well, Jacoby Brissett is just a clipboard, or an I-pad, away.

Meanwhile, there’s the ongoing, unresolved Baker Mayfield conundrum. When, to whom, and how much money will have to change teams to facilitate that seemingly inevitable transaction from taking place? How long can Mayfield, though still on Cleveland’s roster, not be an active participant in training camp before potential trade partners lose interest?

Speaking of questions, what if Watson gets suspended longer than expected? Nobody can answer that because at present nobody has a handle on what’s “expected.”

All of this wouldn’t be an issue if the position in question was, say, the offensive right guard. In the grand scheme, a team’s right guard is sort of a “yeah, whatever” position, when compared to the quarterback.

Because the quarterback is The Quarterback.

In many ways, the Browns are flying blind on the Watson case, until it gets settled, one way or another. They’ve got to prepare him and the team for anything, then, when a decision is finally handed down, adjust.

The question is two questions:

When will His Royal Highness Goodell announce his decision on the Watson case, and, assuming there will be some form of punishment, what will it be?

All that’s at stake for the Browns is a potential trip to the playoffs, perhaps even the Super Bowl.

One way or another, the coming season may be the most challenging one Stefanski will ever face as a head coach. In a vacuum, the addition of Watson, a tier-1 caliber quarterback for sure, is clearly the final piece of the puzzle for a roster loaded with talent at virtually every other position.

But let’s not get ahead of ourselves. There will be plenty of time for that later.

For now, it’s the OTA season. When nobody’s injured, everybody looks great, and the future seems rosy.