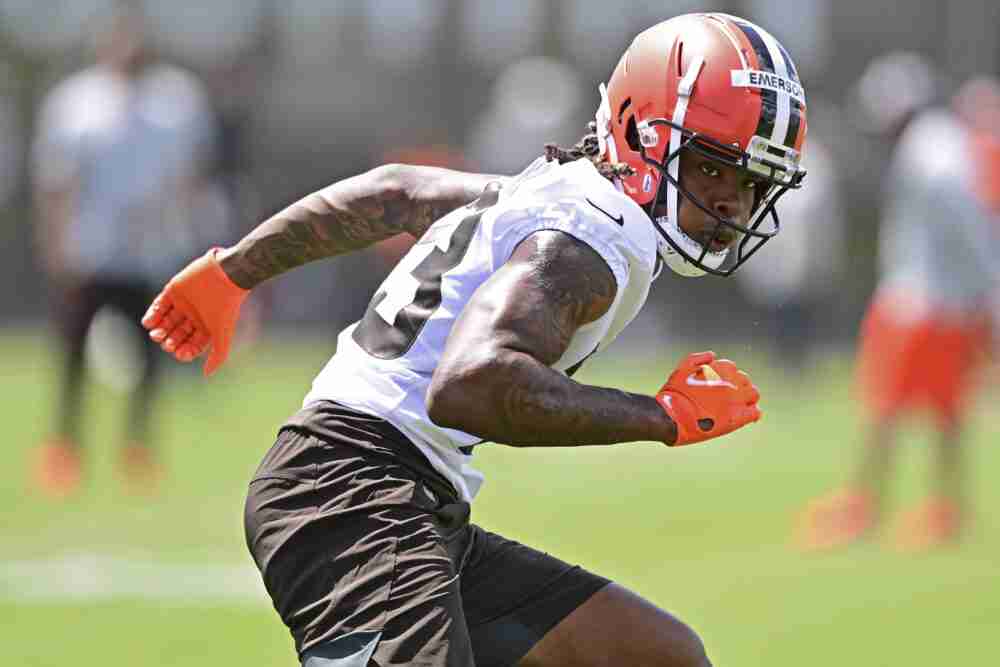 Mississippi State missed him on the field, but cornerbacks coach Darcel McBath credits the huge shot from Emerson for the 31-17 victory over Kentucky last season. Emerson, the No. 68 pick of the Browns on April 29, came flying up the sideline on the broken play on Kentucky’s first possession and destroyed receiver Wan’Dale Robinson.

“I think that hit’s the reason we won the game because it just got everybody juiced,” McBath told The Chronicle-Telegram in a recent phone interview. “But unfortunately he was kicked out after for letting loose on somebody.”

“It set the tone for sure,” Emerson said May 13 before his first rookie minicamp practice. “I wish I could’ve played, though.


“It was targeting, I guess. That was their call, but I feel like it was a good hit. Maybe I hit him a little too hard, I don’t know. But it’s football, so …”

Robinson became a second-round pick of the Giants, No. 43 overall. He’s only 5-foot-8, so the 6-2, 201-pound Emerson had a lot of bending to do to avoid contact with the head and neck.

“He loves to tackle. He loves to jump routes and thump people,” McBath said. “He’s so big. I always tell him, you gotta go lower.

“We actually got a little bit of a coverage bust and he recognizes it and he comes off his guy late and they throw it to the flat, the little receiver from Kentucky, and as soon as he turns around on third down-and-short Martin just crushes him. It looked clean to me, but I’m the coach, so they don’t ask me.”

The Browns expect physicality from their corners but didn’t use their first pick of the draft on Emerson because he can be an enforcer. They chose him at a position of strength because he can cover — and do it at 6-2.

“It’s very rare, the hips and the change of direction and the way he drops his weight and how fluid he is through his transitions,” McBath said. “I mean, you just don’t see that in a guy who’s 6-2. It’s very rare, 6-2 that runs well and has good hands and will tackle you. He has the whole skillset, in my opinion.”

The Browns agreed, drafting him despite having Denzel Ward, Greg Newsome II, Greedy Williams, Troy Hill and A.J. Green at corner. They acknowledged the surplus by trading Hill the next day, and Emerson will compete with Williams and Green for time as the third outside corner.

“Were you guys paying attention to the first drill? He put one of our coaches on his butt — probably should not have,” coach Kevin Stefanski said after the first rookie practice. “Length with corners especially, it allows you at the line of scrimmage to really deter the release of the receiver. As receivers, they want off. They want the ability to sell the go route and come off the ball. When you are somebody like Martin, they are going to work at the line of scrimmage versus you, but even if they gain 6 inches, you have maybe 33 inches to go with your length to make them get around you and get you off your precision-timing game.”

After talking to NFL scouts, McBath expected Emerson to be drafted in the second round. The biggest knock was only one interception in Emerson’s three seasons with the Bulldogs, something McBath “harped on more than anything else.” The pickings were slim, as Emerson was targeted only 50 times in 375 coverage snaps (13.3 percent) in 2021 and 59 of 388 (15.2 percent) in 2020.

“It has a lot to do with the fact that he wasn’t targeted as much as a lot of other guys,” McBath said. “If I’m a quarterback watching tape and I look to his side and I see how he’s working, I’ll try everybody else. There wasn’t much room to throw the ball, so he didn’t get much action. The action he did get, he missed a few opportunities I think he could have found the ball and intercepted it, but it wasn’t very many.”

McBath is confident Emerson has the ball skills and hands to complete the job.

“He’s a guy who has the tools, we’ve just gotta implement them,” McBath said.

The coaches mixed up coverages and allowed Emerson to bait the quarterback into coming his way — Emerson jumped a couple of hitches but the throws were airmailed — but McBath noted Emerson’s frustration with the lack of takeaways and chances but said his maturity didn’t allow it to affect his play.

“I know there’s plays out there that I didn’t get the ball back when I should have,” he said. “So I always try to be hard on myself anyway, it’s only going to make me better.

“I could’ve had two (interceptions) last year for sure, I know that. Well, three really, because I caught one but it was (a penalty for) 12 men on the field.”

McBath appreciates a lot about Emerson’s skill set. At the top of the list is his understanding of the game.

“His best attribute is probably his reaction, the way he plays the game above the neck,” McBath said. “He sees things fast. He reacts really quickly. He always seems to be a step ahead in terms of understanding what he may get and the concepts that may be coming in that situation.”

“It’s not easy, so just get in that playbook and sacrifice some time,” he said. “But it pays off at the end, just knowing everything and kinda knowing what to expect from your opponent.”

Emerson played man and zone at Mississippi State and is comfortable in both, according to McBath. He played receiver before switching to defense in high school in Pensacola, Fla.

“I always love guys who have played receiver because I think they have a better understanding of what’s trying to be accomplished by the receivers,” McBath said. “So he has that knack of how to cut off routes and where receivers are trying to go, hand placement and really just kind of bodying a receiver. That had probably helped him tremendously.”

Emerson talked to starting corners Ward and Newsome after the draft, and they made him feel welcome.

McBath can’t say enough good things about Emerson on and off the field.

“He’s he is the best, man. He’s awesome,” McBath said. “Hardworking. You don’t have to ask him to bust his tail. He sets the tempo at practice on how hard he works.

Cade York learns quickly … talks to Phil Dawson, kicks at FirstEnergy Stadium
Mike Priefer had plenty of reasons to get excited, and emotional, during offseason of special teams additions