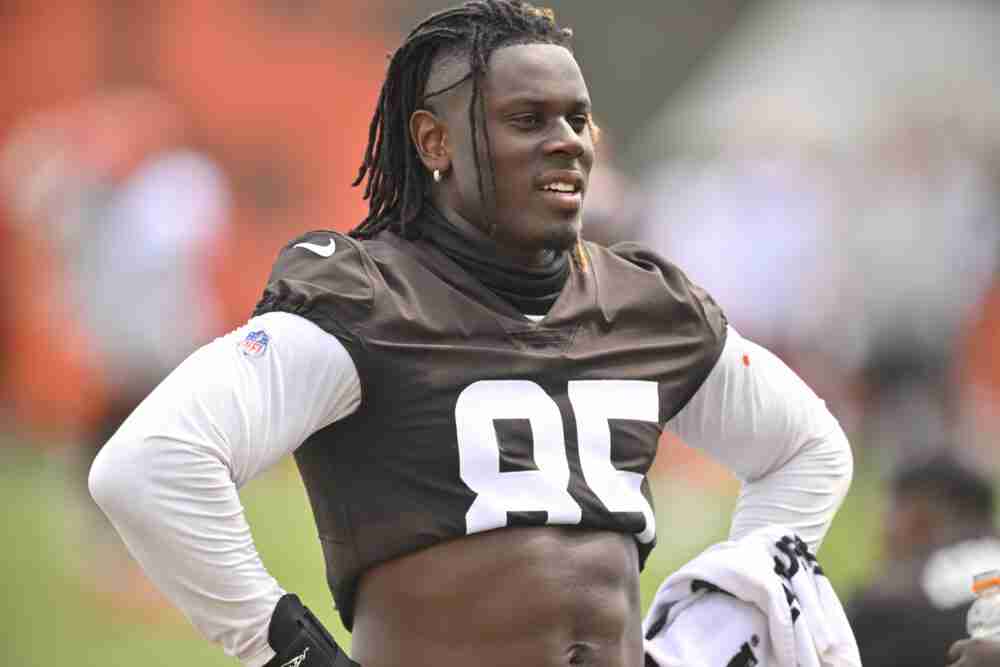 The “evolution” of tight end David Njoku over the last two years has impressed coach Kevin Stefanski, who expects further maturation after the 25-year-old Njoku signed a four-year extension worth up to $56.75 million Wednesday.

“I do expect his game to grow, and it is not as simple as saying, ‘Hey, we are going to throw more balls to you,’” Stefanski said after an organized team activities practice. “I think his game will grow, and you will see it in the run game and in the pass game. I think he is committed to that. David wants to get better, and to be 25, I think you have that opportunity to get better.”

The Browns used the franchise tag in March to keep Njoku off the free agent market and continued to negotiate a long-term deal, reaching an agreement Friday. Njoku has come a long way since he requested a trade in 2020.


“It means the world,” he said. “I guess everything comes full circle. I’m very blessed to be here.

“I just realized that I do want to be here long-term. I just focused on more of the positive things than the negative things. In time, here we are.”

The contract includes $28 million guaranteed over the first two years, and the $14.19 million average ranks fourth among NFL tight ends. Njoku caught 36 passes for 475 yards and four touchdowns last year and has 148 receptions for 1,754 yards and 15 touchdowns since the Browns drafted him with the 29th pick in 2017.

“We’ve seen David grow throughout his time here and are excited to see his best football over the next several seasons,” general manager Andrew Berry said in the news release.

Mailbag: Why are Browns paying David Njoku like a Pro Bowler?

“I feel like there’s nowhere to go but up from here,” Njoku said. “Just keep stacking good days of hard work and perseverance.”

Run blocking has been one of the jumps in Njoku’s game, which is necessarily in the Browns’ ground-heavy attack.

“To see a guy who would not label himself as a run blocker become one of the best run blocking tight ends in the league has been impressive,” coordinator Alex Van Pelt said. “His toughness, his strength, his ability to understand our scheme and what we are asking him to do, he has grown tremendously. It has been fun.”

“I love blocking, man,” he said. “Honestly, I fell in love with it because at that point it was all that I was really doing. So I had two options: I can either cry about it or just block some people. I chose to block.”

Njoku is the clear-cut No. 1 tight end after the release of Austin Hooper in March. Stefanski expects to make Njoku more of a focal point.

“With Dave, certainly want to feature him,” he said. “Great size, great length in terms of catching the football and being able to go up and pluck contested catches.

“David certainly is deserving of that contract. He earned it. He did everything we asked him to do. There are not a ton of guys who can block, run and catch.”

All-Pro end Myles Garrett and the defense aren’t leaving the country, but they are heading to the beach.

Two weeks after new quarterback Deshaun Watson treated more than two dozen members of the offense to a trip to the Bahamas, Garrett is taking the defense to Miami. They leave Thursday.

“Taking my talents to South Beach,” Garrett said, using LeBron James’ infamous quote from his decision to leave the Cavaliers. “I know you wanted to hear the line. There you go.

“Stay there for a couple days through the weekend and try to get some work in, as well. You know, just trying to bond as a defense.”

Garrett said all the defensive linemen and linebackers will attend. He said some of the defensive backs will go — all are welcome — after there was a miscommunication.

“I hate to see it happen in my state,” he said. “I am just kind of disappointed, as well, as far as the response from the police and how they handled it afterwards and the response by (Gov. Greg) Abbott and really the government officials down there as far as still attending the NRA meeting that they had in Houston and still kind of pressing and advocating for what is really the problem right now.

“As far as guns, I do not see the necessity for an 18-year-old to have access to an AR. It seems to be the main weapon of choice for school shootings and mass shootings, and somehow we still continue to find that they get their hands on them so easily. I just think there needs to be more regulations.”

He’s frustrated because the mass shootings continue to happen in America with little done to stop them.

“It just seems that we are too ignorant, too arrogant to give up something that seems like our liberty,” Garrett said. “Other countries have mentally ill kids, as well, and mentally ill adults, and they still do not have this problem. It can’t be that people are just mentally ill. It has to be the culture we surround them with, and it has to be how we handle our guns, as well.”

Van Pelt acknowledged the addition of the dual-threat Watson will allow the offense and playbook to grow. But fans don’t have to worry about the coaches forgetting running backs Nick Chubb and Kareem Hunt.

“There’s different things we’ll be able to do moving forward with him,” Van Pelt said of Watson. “We’ll take some of the things he did well in Houston, implement them into our system, but at the same time, obviously, we’re a run-first offense and we’re never going to shy away from handing the ball off to Nick and Kareem.”

Williams, a second-round pick in 2019, projects as the No. 3 outside corner who would play in three-receiver sets when Greg Newsome II slides into the slot. Woods said Williams will definitely have a role.

“When he stepped in last year, he proved he can play at a high level,” Woods said. “I thought he showed toughness and playmaking ability. He proved that he can go out and make plays against elite receivers.”