Mike Priefer had plenty of reasons to get excited, and emotional, during offseason of special teams additions 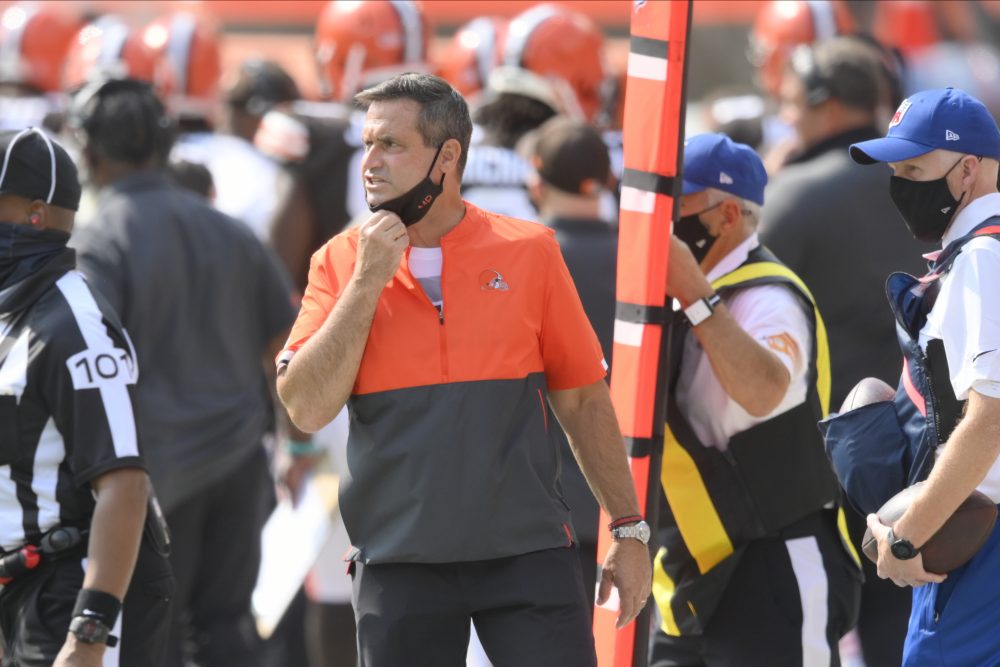 Special teams coordinator Mike Priefer got a new kicker, returner and two punters in the offseason.

His celebration may have included a tear or two or a hundred.

“I had tears streaming down my face,” he said Wednesday during organized team activities. “I was a very happy man.”


Priefer brought up his crying episode when asked about the draft trade that gave the Browns extra picks in the fourth round. The move signaled kicker Cade York could be the choice with one of the added selections, and general manager Andrew Berry followed through by taking York out of LSU at No. 124.

“When Andrew pulled the trigger in the fourth round, that was a big deal,” Priefer said.

He turned coy when asked if he actually got emotional after the trade.

“I am not going to confirm nor deny that I shed tears of joy and then even more tears of joy when we did pick him,” he said.

The Browns have been unable to find consistency at kicker in Priefer’s three years on the job. Austin Seibert was a fifth-round pick in 2019 but didn’t make it to Week 2 in 2020, and Chase Mclaughlin couldn’t maintain a hot start a year ago.

York is supposed to end the shuffle. He was the only kicker drafted and brings a strong right leg and an impressive resume.

Priefer considers the AFC North the NFL’s best in special teams, and the plan is for York to put the Browns on similar footing with Baltimore’s Justin Tucker, Pittsburgh’s Chris Boswell and Cincinnati’s Evan McPherson. With a talented roster and playoff expectations, the Browns should play plenty of important games in which every kick takes on greater significance.

York went 54-for-66 (82 percent) for his three-year career at LSU. He was 15-for-19 from 50 yards, including a 57-yard winner in the fog at Florida. He talked to former Browns star Phil Dawson about kicking at FirstEnergy Stadium and has already practiced on the lakefront a few times.

“Obviously we have a very difficult venue to kick in,” said Priefer, who spent a lot of time with York before the draft, including a private workout. “Cade will come in, and he is big and he is strong. He is very confident. He understands his craft. He has all of the talent in the world. We just have to keep getting him to be more consistent.

“He is a lights-out kicker. He loves the big stage and he has performed on the big stage. That was a really big part of the evaluation.”

York (6-foot-1, 206 pounds) didn’t handle kickoffs at LSU because they had a specialist, but Priefer is confident he’ll have no trouble adding that to his duties.

“He definitely has the leg strength. I just think we have to refine exactly how we want certain kicks kicked,” Priefer said.

The Browns were in the market after cutting Jamie Gillan last season and finishing the year with veteran Dustin Colquitt.

“Obviously we were very inconsistent last year and we had to make a change down the stretch,” Priefer said. “Having these two young guys, Corey and Joe, fight it out, it will be a great competition. They bring a different element. They both are very, very strong. Very good directionally, which we need to do a better job with. I am excited about them.”

The rock-solid Charley Hughlett remains the long snapper. He joined the team at the end of 2014, and only Pro Bowl left guard Joel Bitonio has more tenure on the roster.

The other high-profile special teamer is the returner. Priefer’s coverage units have generally been solid, but the return game has failed to generate explosive plays or excitement.

Free agent Jakeem Grant Sr. was signed to a three-year deal worth up to $13.8 million to change that.

The 5-7, 172-pounder can contribute as a slot receiver, but his primary job is as a returner. He made the Pro Bowl in 2021, averaging 11.9 yards on 26 punt returns, including a 97-yard touchdown, and 23.4 yards on 23 kickoff returns. For his six-year career, he has four touchdowns on punt returns and two on kickoff returns.

“I thought (it) was a piece that we were missing,” Priefer said of returner. “We need more production. We need to up the ante a little bit. I am excited about Jakeem.”

From Grant to York to the pair of punters, Berry devoted resources to upgrading the special teams.

“It was a big priority for us this offseason to make sure that we had added some competition and talent to the kicking game,” Berry said after the draft. “I think that is something that coming out of last year that we thought we could make improvements, and we are certainly excited about some of the individuals who we have added to the roster.”

Rookie Martin Emerson Jr. brings special size and a willingness to deliver the boom
Burning to be better: Browns receiver Anthony Schwartz knows speed only an asset if he can make catches, stay healthy