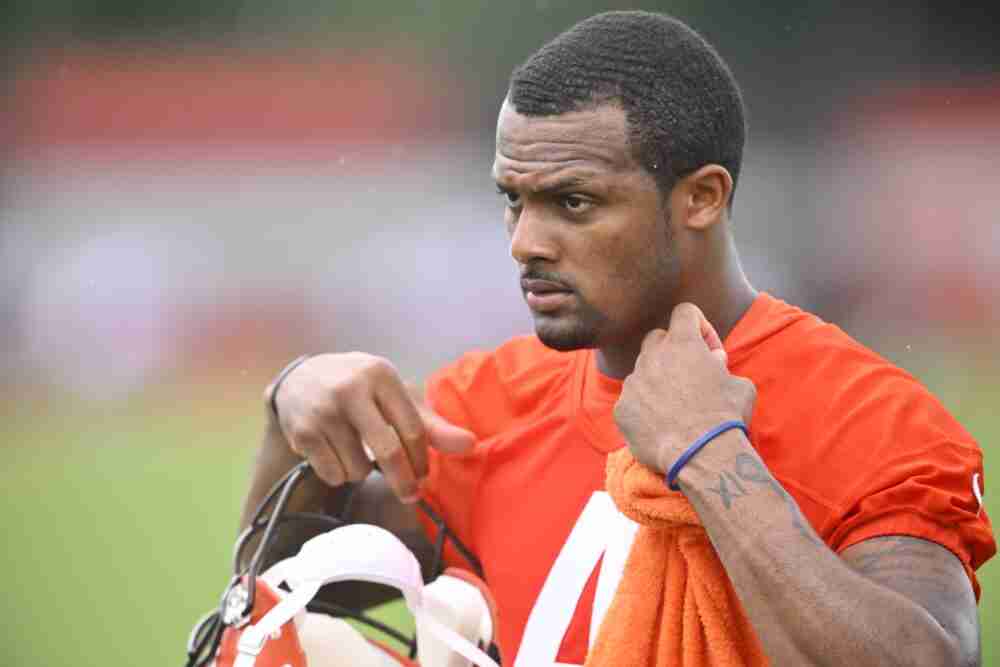 The filing of the lawsuit, though expected, was the latest reminder that the troubling accusations continue to follow Watson and the Browns before he’s taken a snap in a game for them. He was acquired March 18 in a blockbuster and controversial trade, and the Browns gave him a fully guaranteed five-year contract worth a record $230 million.

The lawsuit filed Monday references a “disturbing pattern of conduct” during massage therapy sessions, pointing out the other 23 suits are “strikingly similar, evidencing a habit or custom.” The lawsuit says the appointment took place in August 2020 and that Watson masturbated, with some of the ejaculate landing on the plaintiff’s chest and face.


“Watson offered no apology or explanation for his conduct,” the lawsuit stated. “He instead got dressed, paid plaintiff $150 via Cash App and left. Plaintiff was left humiliated and traumatized.

“Shortly after the massage, plaintiff called her close friend to tell her what happened. They both were mortified by Watson’s conduct. There were no further massage sessions. She shortly thereafter quit massage therapy.”

“I’ve never assaulted or disrespected or harassed any woman in my life,” he said.

Two Houston grand juries declined to indict him on criminal charges, and Watson’s lawyers continue to deny all accusations, saying the sex that happened with three women was consensual. They’ve portrayed the lawsuits as money grabs, said the women have changed their stories from the lawsuits to the depositions and questioned why attorney Tony Buzbee represents all the plaintiffs.

“We are unable to respond to the new lawsuit at this time,” Rusty Hardin, Watson’s lead attorney, said in a statement released Monday night. “Our legal team has not had time to investigate this new filing and had not heard her name until today. Deshaun continues to deny he did anything inappropriate with any of the plaintiffs.”

The two lawsuits filed in the last week were the first since April 2021. The 23rd lawsuit cited HBO’s “Real Sports with Bryant Gumbel” episode about Watson’s situation, with the plaintiff saying she was inspired by the courage of the two accusers who spoke on camera.

The suit filed Monday said the plaintiff came forward because Watson has claimed he did nothing wrong and has no regrets.

“The allegations made in this new case are strikingly similar to those made by many of the other victims,” Buzbee said in a statement sent to The Chronicle-Telegram. “Lost in the media frenzy surrounding Deshaun Watson is that these are twenty-four strong, courageous women who, despite ridicule, legal shenanigans, and intense media scrutiny, continue to stand firm for what is right. Setting aside the legal wrangling, the complicity of the NFL, or the failures of the criminal justice system, the resounding story that should be told here is that these women are true heroes. I will say again, our entire team is incredibly proud to represent these women, and we look forward to the day when we can lay out their cases in detail in front of a jury.”

Hardin received criticism for comments made Friday during an interview with SportsRadio 610 in Houston in which he said “doing something or saying something or being a way that makes you uncomfortable is not a crime, and so we’ve had two grand juries find that and nobody seems to want to listen.”

Hardin issued a statement to clarify what he said on the radio.

“I have reiterated to others it’s not ok to do anything that a woman does not agree to do,” the statement said. “These women have alleged assault in their pleadings. I was speaking in a hypothetical situation. If there is a consensual sexual encounter after a massage, that is not a crime nor the basis for a civil lawsuit. I was not talking about what Deshaun did or did not do or expected or did not expect.”

“The public comments made by Watson’s defense team evidence a belief system that explains Watson’s conduct,” it read.

“The truth is, Watson is not actually seeking a massage — he wants something more,” the lawsuit also states.

Coach Kevin Stefanski was asked if the organization has revisited the accusations following the new lawsuits.

“With that, we’re trying to just be respectful of the process and let that take care of it,” he said.

The NFL continues to investigate Watson to determine whether he violated its personal conduct policy, with a suspension part of the possible punishment. Hardin told USA Today that Watson is done meeting with the league after four sessions.

The Browns would like to know if Watson will miss time this season, and how much, as soon as possible. Journeyman Jacoby Brissett was acquired as the backup after the trade for Watson, but if the suspension were to be for the entire season, the Browns may feel compelled to make another move at the position.

“All along we’re just going to take those things day-by-day and when we have information, then we’ll act on said information,” Stefanski said. “Prior to that we’ll just kind of talk about how we envision things going and then be ready to adjust.”

Mike Priefer had plenty of reasons to get excited, and emotional, during offseason of special teams additions