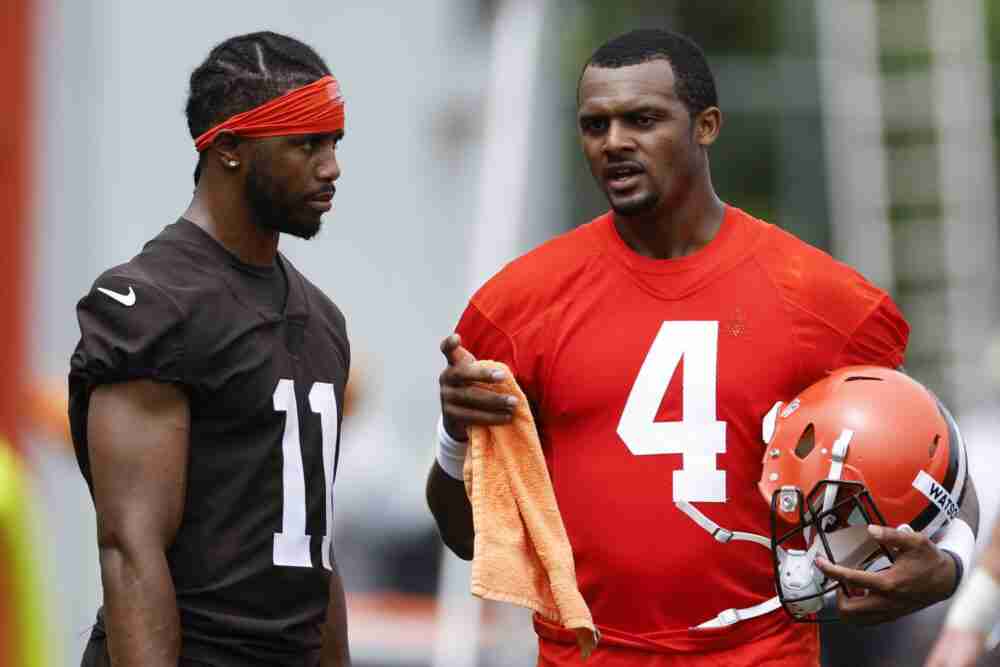 bROCKY RIVER — Before the Browns golfed, they practiced.

“He had a real nice play today,” Stefanski said Monday at the team’s annual charity golf outing at Westwood Country Club. “Really since the day we got him, as you guys know, we’ve talked about how dependable he is. He does what he’s supposed to do, he’s where he’s supposed to be.

“I do see his game growing. I think his body control, catching the ball and contested catches has never been tough for him. That’s just one of the traits he has. But in and out of breaks, some of the things we’re asking him to do are maybe a little bit different than he’s done in the past and he’s done a great job. I think the quarterbacks like throwing to him and that’s important, as well.”

With Odell Beckham Jr. and Jarvis Landry gone from the start of last season and Amari Cooper acquired in a trade to be the No. 1 receiver, there’s an opening at the second starting spot. Peoples-Jones will get the first chance to fill it and was asked if he believes he can be a No. 2.

“That’s not for me to decide. I just come in every day and work,” he said.

Peoples Jones (6-foot-2, 204 pounds) was a sixth-round pick out of Michigan in 2020. He was extremely efficient as a rookie, catching 14 passes for 304 yards and two touchdowns. He had a great training camp in 2021 but was a bit inconsistent during the season, starting nine games and catching 34 passes for 597 yards and three touchdowns.

“I made a couple plays,” he said of last season. “I just want to keep moving forward, keep developing, keep learning from my previous mistakes and just keep getting better, taking it day by day.

The surroundings have changed around Peoples-Jones. Not only is the workmanlike Cooper the new main man in the receivers room, Deshaun Watson has replaced Baker Mayfield at quarterback. Peoples-Jones is committed to building a relationship with the new quarterbacks on and off the field.

Peoples-Jones said learning from Beckham and Landry “shaped me a lot” and he’ll “forever” keep in touch and pick their brains.

“I always used to look up to those guys and to actually be around them, get to know them as people outside of what I heard from them or outside of what media may say, it did a lot for me, especially as a young player,” he said. “Just being able to have someone that I can kind of learn from and ask questions to some people who have been here in the league for a long time, it’s just a blessing.”

He has turned to Cooper.

“He’s very smart. He’s a technician,” Peoples-Jones said. “He’s been killing the league for a long time, and I can see why.”

The Browns also have Anthony Schwartz and rookie David Bell — third-round picks from the last two drafts — returner Jakeem Grant Sr., rookie sixth-rounder Michael Woods and Ja’Marcus Bradley, yet discussion continues as to whether a receiver needs to be added.

“I’m pretty comfortable with the guys we have,” Peoples-Jones said.

Stefanski wouldn’t discuss the team’s plans for Mayfield for the three-day mandatory minicamp next week. He’d be subject to fines if he didn’t report, but the Browns could excuse him. They can’t prohibit him from attending.

The Browns are trying to trade Mayfield, he wants to be traded and minicamp contains the last practices before training camp in late July.

Cornerback Greg Newsome II said on the “Varsity House Podcast” that the relationship last season between Mayfield and Beckham was “just off.” Beckham was released at midseason after asking for a trade and his dad sharing a video showing Beckham repeatedly running open and Mayfield missing him.

“It was a little bit of a distraction,” Newsome said Monday. “But those off-the-field matters have nothing to do with us. We have to find a way and do our job. So I don’t think it really affected too much, because at the end of the day you wouldn’t be able to know that there was anything wrong within our locker room. We all jelled, we all were still perfectly fine with each other.

“I think they’re still really good friends. Obviously some things on the field just didn’t work out, that’s how life is. Everyone’s had friends where they don’t agree on certain things and that doesn’t separate their friendship or anything, they just didn’t click the best on the field.”

Stefanski will give the team a change of scenery for its final two practices of the offseason program.

The team will head to the Pro Football Hall of Fame on June 15 for the second day of minicamp. The team will visit the Hall and have a quick practice that’s closed to the public.

“It is so vitally important that we understand what’s come before us, the players, the coaches, the great teams that have come before us, and we’re so fortunate to have the Pro Football Hall of Fame right down the road,” Stefanski said.

Minicamp will conclude June 16 with a practice at FirstEnergy Stadium.

“I want to get all of our players working in the stadium, I want to get our young kicker working in the stadium in the offseason, I think it’s a good spot to end camp,” Stefanski said, referring to fourth-round pick Cade York. “Also, from a communications standpoint, we can work together as coaches and split the team up and put ourselves through some situational football.”

Running back D’Ernest Johnson signed a one-year deal that can be worth up to $2.433 million, including $900,000 guaranteed. The agreement was reached and reported Saturday.

“He’s a very dependable player. He’s going to give you everything he has,” Stefanski said. “He’s a great teammate. The guys really want to fight for him when he’s back there because he does everything that’s asked of him, whether it’s special teams or third-down running back, you name it.”

The Browns also have Nick Chubb, Kareem Hunt, rookie Jerome Ford and Demetric Felton at the position, which could lead to someone getting traded before the season.

“Those type of things are really good problems to have,” Stefanski said of the depth. “We want good players and if we have a bunch of good players at one position that’s OK.”

The golf outing raises money and awareness for the team’s statewide initiative to end chronic absenteeism in schools, along with other causes.

Due to miscommunication, many of the defensive backs were left out of the defense’s trip to South Beach last week planned by defensive end Myles Garrett. Newsome said the secondary plans to schedule its own excursion to bond.

“I feel like we’re all brothers and that’s something that we want to do,” he said, adding a destination had not been determined.

** Right tackle Jack Conklin was at the golf outing with a sleeve on his right leg. He continues to rehab following surgery on a torn patellar tendon suffered Nov. 28 and hasn’t practiced.

The hope is he’s ready for the opener Sept. 11 in Carolina.