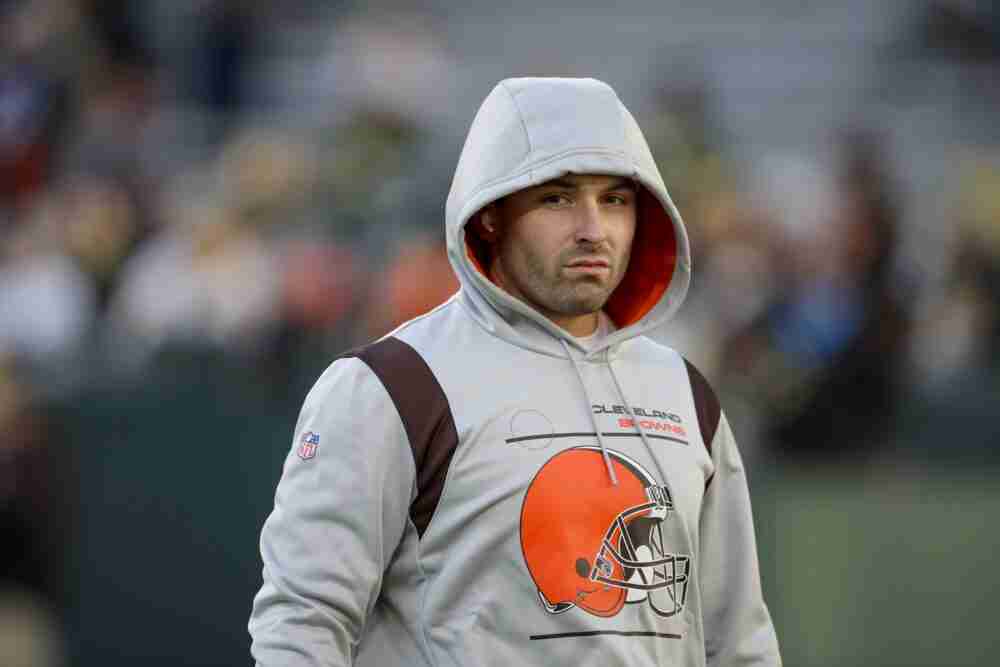 BEREA — Baker Mayfield’s exile from the Browns will continue through the end of the offseason program.

The team announced Wednesday that Mayfield has been excused from mandatory minicamp that will run next Tuesday through Thursday. He won’t be fined.

“Obviously that was a decision made between our organization, Baker and Baker’s team,” coach Kevin Stefanski said after an organized team activities practice. “Felt like that was the best decision for both sides.”


The Browns are trying to trade Mayfield but haven’t found a deal they’re willing to accept. Mayfield, whose $18.86 million salary for 2022 is guaranteed, wants to be traded and has been estranged from the team since it publicly pursued Deshaun Watson in March to replace him.

The Browns completed the controversial trade for Watson on March 18 and gave him a fully guaranteed five-year, $230 million contract, which set an NFL record for guaranteed money.

Mayfield, the No. 1 pick in 2018, skipped the voluntary offseason program that started in April and will wrap up Thursday. The minicamp is the only mandatory part of the offseason.

The Browns will reconvene in late July for training camp. If Mayfield’s not traded by then, he and the Browns will have to decide how to proceed.

“Obviously you look at the roster and he’s still there,” safety John Johnson III said. “He’s not present here, but I think it’s just a business. I think we all understand that now more than ever.

“We’ve got three quarterbacks here now, so it’s kind of leaning towards him not being here, so I wouldn’t say we mentally separated, but we are kind of preparing for him to not be here.”

Jacoby Brissett and Joshua Dobbs are behind Watson on the depth chart.

Watson faces 24 civil lawsuits alleging sexual misconduct and is being investigated by the NFL to see if he violated the personal conduct policy. Potential punishment includes a suspension.

The Browns appear to be done with Mayfield, but Stefanski was asked if there’s a possibility he could be the quarterback if Watson is suspended.

“I’m not going to speculate on those type of things,” Stefanski said. “But we’re just going to deal with it day to day.”

Stefanski wouldn’t comment on any communication he’s had with Mayfield, or if the relationship between the organization and Mayfield is beyond repair, as Mayfield said during a podcast released in April.

Baker Mayfield says on podcast he feels “disrespected 100 percent” by Browns, has no regrets from time in Cleveland

Rookie kicker Cade York has made a great first impression.

“Oh, he’s unbelievable,” Johnson said. “It looks like the ball just flies off of his foot. It could be a 30-yard kick, he’s going to hit it for 60. It flies through the uprights, accurate. He’s young, so I think that helps sometimes. He doesn’t really know the pressure and the magnitude. He’s just out there having fun.

“I’m really looking forward to the season and seeing him kick.”

York has kicked at FirstEnergy Stadium a few times since being drafted in the fourth round, but Wednesday was the first time he went through a field goal drill in front of reporters. He was 7-for-8, including ending with a make from 58 yards.

A PICK AND A PARTY

Johnson intercepted a high throw from Watson over the middle Wednesday. Johnson also got Watson earlier in the OTAs.

The defense had a good time after both.

“That’s one of our pillars on defense — celebrate success,” Johnson said. “If a guy has success, you should be sprinting to him. You should want to be the first guy to help him off the ground, go celebrate with him.

“The fun is in winning and when you’re making plays. That’s all it’s about.”

“It is outstanding. You have to play defensive football with passion,” he said. “I think those guys do it. We always talk about one of the rules of being a great teammate is celebrating with your teammates. So when a big play happens, we want to celebrate together. That is something that you start on the practice field here and hopefully take it into the fall.”

Coordinator Joe Woods is testing his players with the hardest parts of his playbook. He shortened his call list last season after early breakdowns, but expects to be able to do more with much of the defense returning for a second or third year in the system.

“Just like the stuff that we wanted to do last year that we kind of had mistakes and blown coverages, the harder stuff to master, that’s what we’re working on,” Johnson said. “The bread and (butter), the simple stuff is easy. We’ve been doing that since Day 1 last year, well at least I have, and guys before me have been doing it for three years now. So just the stuff that we had trouble with last year, we are trying to master the more complex stuff.”

GLAD TO BE BACK

Defensive line coach Chris Kiffin is “1,000 percent” happy with his decision to return to the Browns.

After two years on Stefanski’s staff, Kiffin resigned after last season to take a job on the University of Mississippi staff under coach Lane Kiffin, his brother. But Chris Kiffin quickly had a change of heart.

“That was a very unique situation,” Kiffin said. “I’m just very appreciative of the Browns for bringing me back, getting the job back.

“But for me it was kind of a decision after a long season and something that I thought maybe I wanted to do, but then after the fact it was more of a family decision of college lifestyle recruiting and NFL lifestyle working for a phenomenal head coach who cares about family and perspective and what was important to me. So I was very fortunate to get back, very excited to be back here.”

The Browns announced 10-time Pro Bowl left tackle Joe Thomas, NFL Network’s Chris Rose and former NFL Network reporter Aditi Kinkhabwala will be the broadcast team for the preseason games on News 5. Thomas returns for a second season, while Rose, a Cleveland native, and Kinkhabwala are new to the team.

** Punter Joseph Charlton was the holder with the first-team field goal unit. Corey Bojorquez replaced him with the second team. They’re competing for the punting job.