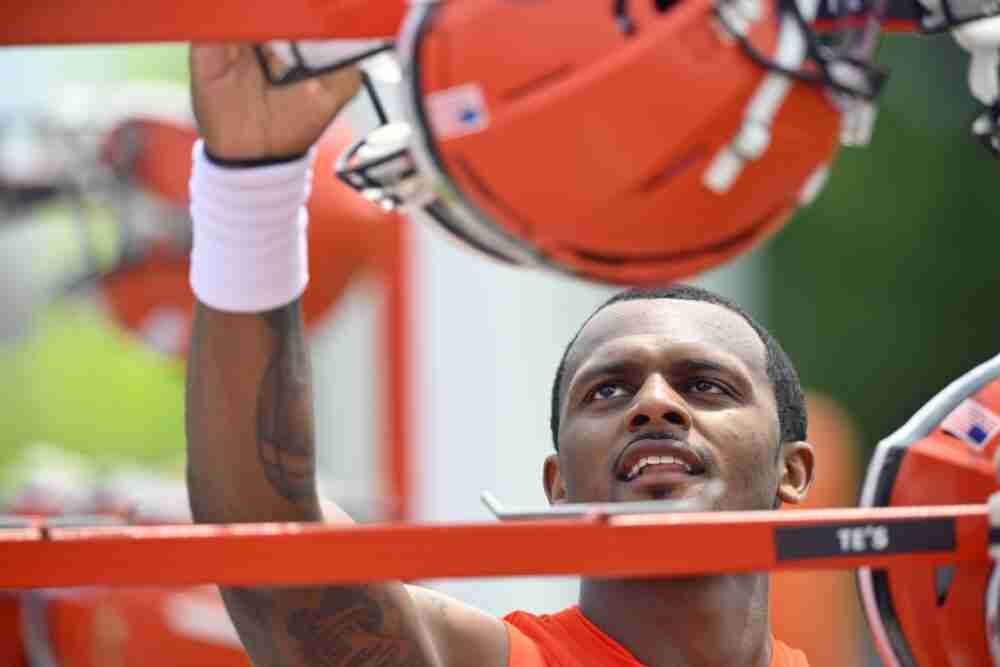 BEREA — The lawsuits and allegations haven’t stopped. The questions keep coming, too.

Offseason practices continued for the Browns on Wednesday, two days after a 24th civil lawsuit was filed against quarterback Deshaun Watson and a day after The New York Times released an investigative report on his legal situation. Watson didn’t speak to reporters — he hasn’t since the introductory news conference March 25 — leaving coaches and players to discuss the lingering controversy and uncertainty that has dominated the offseason.

The latest lawsuit contained an accusation that Watson masturbated during a massage therapy session, and The New York Times reported Watson booked massage appointments with at least 66 different women in the 17 months from fall 2019 through spring 2021. One of the additional women who spoke publicly for the first time didn’t sue Watson or file a police complaint but told The Times that Watson was persistent requesting sexual acts during the massage.


Coach Kevin Stefanski was asked if he’s still comfortable with Watson as a person after saying he was in March.

“I understand the question. I think for me I’m going to be respectful of the investigation, of the legal proceedings, I’m going to let that play out,” Stefanski said.

He gave a similar answer to many specific questions, including when asked if the team was aware of the accusations in the latest lawsuit.

“Again, I can’t add much,” said Stefanski, who spoke with owner Jimmy Haslam on the field during practice. “I’m going to let both the investigation and the legal proceedings play out.”

He did say “we stand by what we said,” referring to the organization’s claims in March it did thorough research before pursuing Watson. No one from the team talked to any of the accusers, citing the ongoing legal process.

Rusty Hardin, Watson’s lead attorney, issued a statement Monday night saying he couldn’t respond to the lawsuit because he hadn’t heard the woman’s name until Monday.

“Deshaun continues to deny he did anything inappropriate with any of the plaintiffs,” the statement concluded.

Tony Buzbee, the attorney for the 24 plaintiffs, announced Wednesday he plans to add the Houston Texans to the list of defendants in the civil lawsuits. Buzbee said the Texans “facilitated” Watson’s conduct.

“In many of the cases, the Texans provided the opportunity for the conduct to occur,” he said in the statement. “We believe the Texans organization was well aware of Watson’s issues, but failed to act.”

The football doesn’t stop despite the seriousness of the allegations. Watson is trying to get comfortable in a new offensive system that’s being adjusted to take advantage of his skill set.

“What you try to do here as coaches, players is you focus on the work you have when you walk in the door, and really the stuff on the outside we let that take care of itself,” Stefanski said.

The intersection of the legal and the football is the NFL’s investigation. Two Houston grand juries declined to indict Watson on criminal charges, but the league is focused on whether he violated its personal conduct policy. If it’s determined he did, he faces punishment, which could include a suspension.

The Browns believe they’re Super Bowl contenders with Watson, so a lengthy suspension could sabotage the season.

“You know in a perfect world, we wish that it wasn’t here,” safety John Johnson III said. “But I don’t think it’s anything that could get in the way. It’s a speed bump. It’s not really like a barrier that blocks us from where want to get. I think it’s a speed bump, so once we get over and we hit full steam ahead, we’ll be fine.”

Veteran Jacoby Brissett, 29, is No. 2 on the depth chart and 14-23 as a starter. Watson has taken the bulk of the team repetitions in the last three weeks during practices open to reporters, so Stefanski was asked if Brissett is getting enough work given the possibility he could be the Week 1 starter.

“I think we’re repping the quarterbacks appropriately and as more information becomes available you may modify and adapt what you do,” Stefanski said. “For now, we’re making sure those guys are getting the work that they need.”

“We want (No.) 4 back there, but I think we’ll be ready,” Johnson said, referring to Watson.

The New York Times report also said the Texans provided the venue Watson used for some of the massage appointments and a team representative gave him a nondisclosure agreement to use after a woman who’s suing him threatened online to expose his behavior. And through a public records request, The Times found extensive communication between Hardin and the prosecutors in the criminal cases against Watson.

“I personally contacted the Harris County DA’s office one time on behalf of the victims to make available to her my clients and any evidence I had collected,” Buzbee posted on Instagram. “My team also did so. They wouldn’t even talk to us! I had no idea that the assistant district attorney was regularly corresponding with Deshaun Watson’s lawyer by email and text …

Buzbee said the assistant district attorney asked only one of the alleged victims to appear before the first grand jury, even though others were standing by.

The lawsuit filed Monday references a “disturbing pattern of conduct” during massage therapy sessions, pointing out the other 23 suits are “strikingly similar, evidencing a habit or custom.” The suit said the plaintiff came forward because Watson has claimed he did nothing wrong and has no regrets.

Coaches and teammates have been consistently complimentary of Watson as a player and leader.

“He’s been awesome,” new quarterbacks coach Drew Petzing said. “He came in Day 1 and works extremely hard, very coachable, competes at a really high level. I think he takes the job very seriously. He’s been a lot of fun to coach here over a short amount of time.”

Petzing said he’s comfortable having to coach Watson despite the off-the-field issues.

“You ask a couple of people about what he’s about as a person, people that have coached him and people who were around him at Clemson, you hear really good things and in a short amount of time I’ve definitely seen that,” Petzing said. “I’ve loved working with him.”

Johnson says he talks often with Watson and hasn’t seen the legal issues affect him in the building.

“I don’t think it’s really getting in the way,” Johnson said. “I think he’s a professional. Once he comes to work it’s about work. It’s about building relationships with his teammates. He’s done a great job of just being a true professional and hopefully it all clears up soon, but as of now, we’re just going to keep working.”

The trials for the civil suits won’t start until March at the earliest, and Stefanski was asked if he’s prepared for the situation to hover for the next couple of years.

“I think with anything, we’re trying to just focus on the day,” he said. “I can’t see past today, truly, so that’s kind of where my focus is.”

24th lawsuit filed against Deshaun Watson cites a “disturbing pattern of conduct”
Myles Garrett hosts 1st youth football camp, says he has “so much more” to do in community