Myles Garrett hosts 1st youth football camp, says he has “so much more” to do in community 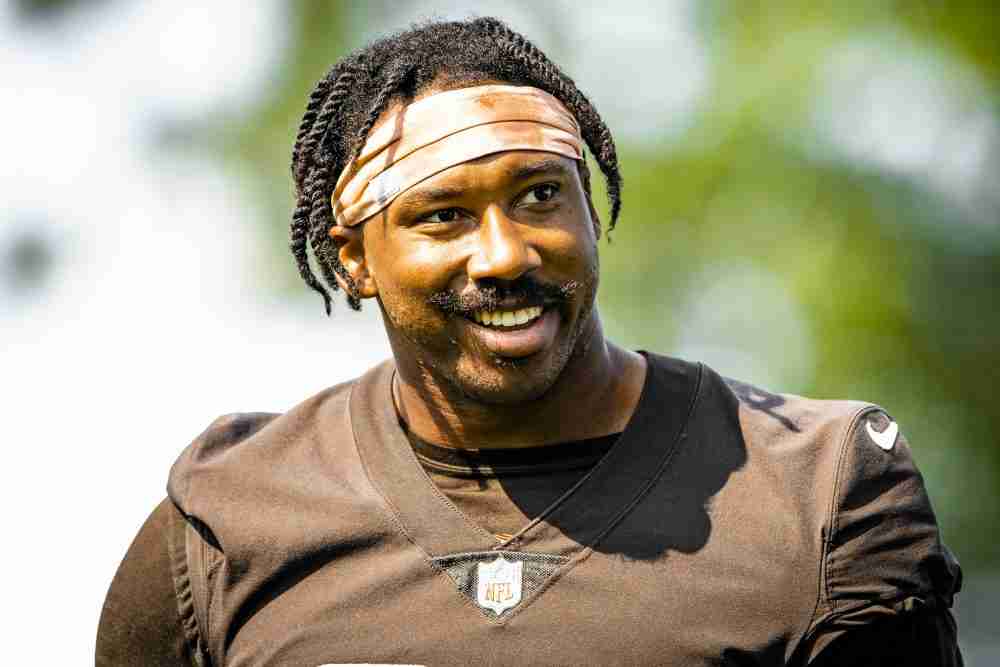 GATES MILLS — Myles Garrett went from group to group Saturday morning at his first youth football camp. The 6-foot-4, 272-pound All-Pro defensive end threw passes, played safety and offered coaching tips to the kids, some of whom were a third his size.

Then he stopped at midfield to embrace and talk to a special visitor: Browns coach Kevin Stefanski.

“It was amazing,” Garrett said during the event at Gilmour Academy. “Him putting his money where his mouth is, being able to come out here, saying that he wants us to be rooted in the community and giving back to that, using our platform for good.

“I’ve always been about that, I was taught that young and it’s just a part of me. Him also doing it and for him to be a part of it and showing up literally and being here, maybe get him to coach today or tomorrow. But just his presence means a whole lot.”

Garrett is entering his sixth season with the Browns after being the No. 1 pick in the 2017 draft. His commitment to and relationship with the Northeast Ohio community has steadily grown.

“I feel I have so much more left in the tank, so much more to do and I have so many years left for this team and this community,” he said. “So I’m just starting to get these things rolling. This might be going into Year 6, but I’m hoping to do this for a much longer time, even another six years, so I’m just happy to get this started.

“I’m hoping to get some of my former teammates and my current teammates into stuff like this and be able to make this a real NFL or team-type deal where they can be a part of it.”

Garrett has commissioned artwork in downtown Cleveland, including a mural of his grandmother, visited area schools, helped provide food to the needy, spoken out against social injustice and hosted dog play dates. He added youth camp host to the resume for a reason.

“Mainly because I didn’t really do it,” Garrett said of his childhood in Arlington, Texas. “I didn’t really get to see my idols or the football players and stars I liked back in the day. I was a Dallas fan, so there was a lot of people on that team that I never got to meet, never got to talk to or learn from. So I think it’s a big deal to be out here with these kids, try to shape what they want to do, see if they really want to do it, and if they do, have fun with your friends and other kids in the community.”

Garrett, 26, was voted an All-Pro the last two seasons, has 58.5 sacks in his career and is the early betting favorite to be the NFL’s Defensive Player of the Year. He said he went to basketball, not football, camps as a kid and was asked the biggest lesson he wanted to give the attendees of the two-day event.

“Have fun. That’s what it’s all about,” he said. “You want to have love for the game. You’ll never give as much as you can if you don’t love it, if you don’t truly feel like you’re a part of it and this is something you want to do for the rest of your life. That’s how I feel about football, that’s how I feel about basketball, and I wanted them to be able to get out here and just appreciate the game.”

Garrett had a busy weekend with the public. On Friday he hosted a “Night at the Movies” in Valley View in conjunction with the Cleveland Museum of Natural History, as families from United Way Greater Cleveland and YWCA Cleveland watched “Jurassic World: Dominion” with the self-described “dinosaur nerd.”

“A lot of kids came out, a lot of families came out,” Garrett said. “So it was just a good time.”

Garrett made an interesting comment to reporters Friday when asked about Stefanski’s plan to take the team to the Pro Football Hall of Fame on Wednesday during mandatory minicamp.

“If we go as a team and Kevin says, ‘I want you to go,’ fair play. But I’m not trying to go until they have me in there for good.”

Garrett played coy Saturday when asked his specific plan to get ready for training camp in late July, saying he didn’t want to give away secrets to other defensive linemen in the league.

“I’m trying to take it to the next level and can’t allow anybody to do what I’m doing,” he said. “I feel like each year I try to do something a little bit different, add a little bit of a new flavor to my game, and it’s nothing different about that this year, trying to just get a little bit better.”

He’s also keeping his expectations for the Browns to himself.

“Those guys know where my head is and what I expect out of them,” he said. “But as far as putting expectations on the community, we’ve had that before. We’ve had the Super Bowl talk, we’ve had the going deep in the playoffs, I don’t want those guys to be worried about the pressures of outside media and all that external weight on their shoulders. I want them to be able to come in the building, come in the office, be ready to work not worried about what’s being said outside and just put this time in.”