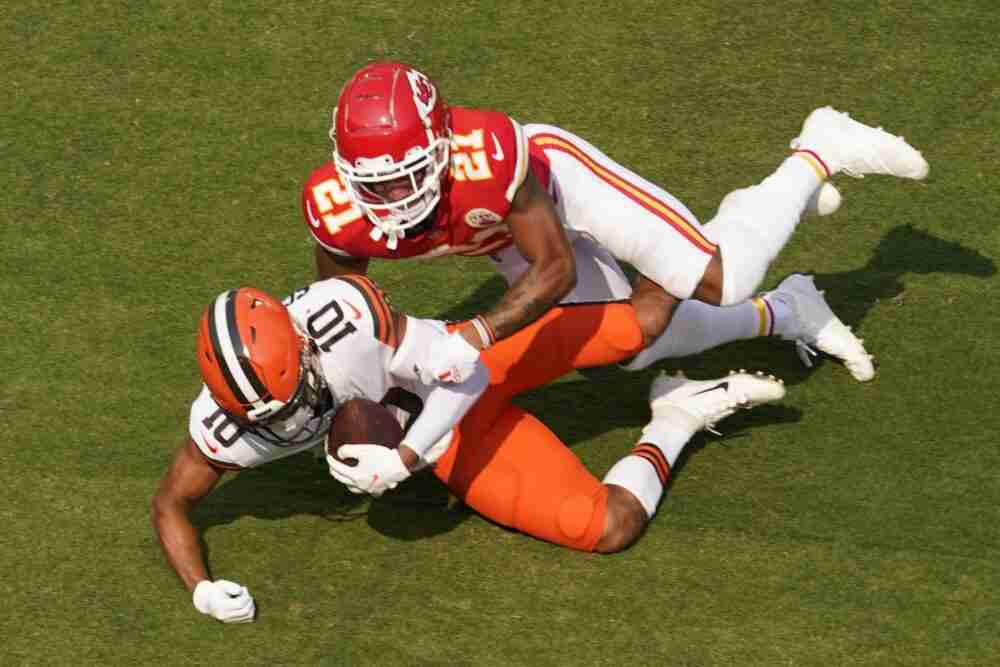 Receiver Anthony Schwartz has focused on the basics as he prepares for an important second season. He wasn’t happy with his rookie year in either category and must be better in 2022 — the Browns are counting on him to provide the speed element in the passing game.

He feels a little like a rookie after injuries — hamstring, knee and concussion — and a lack of production limited him to 295 offensive snaps. He had 10 catches for 135 yards and a touchdown in 14 games.

“Last year there was a lot going on with me and also the rest of the team,” Schwartz said last week during organized team activities. “I didn’t feel like I was able to play at my best last year. But this year, I’m flipping a whole new script, trying to get a fresh new start and show people what I can do.”


Myles Garrett hosts 1st youth football camp, says he has “so much more” to do in community

The Browns fell in love with Schwartz’s world-class speed and drafted him in the third round in 2021, No. 91 overall out of Auburn. But Schwartz struggled to shake the reputation as a track guy, as he was slowed by an offseason hamstring injury and had too many drops in practice.

He spent way too much time on the sideline during the offseason program and training camp and never got into a groove. This offseason he’s been an active participant heading into the three-day mandatory minicamp that starts today in Berea and will make stops in Canton on Wednesday and FirstEnergy Stadium on Thursday.

And hold onto the ball.

“Trying to catch every day because as a receiver, you have to be able to catch the ball,” he said. “That’s the main thing I’ve been working on and come here and put it all together.”

Schwartz came back from the hamstring injury in camp to have his best game of the year in the opener with three catches for 69 yards and a rush for 17 in a loss to the Chiefs. But he injured a knee, which slowed him moving forward even though he continued to play. He later missed three games after sustaining a concussion Nov. 14 returning a kickoff vs. the Patriots.

“We have a list of things for all our players that we prioritize that they need to improve on,” O’Shea said. “And I think he’s really done a good job with some of the areas that we’ve targeted and has made progress. And he’s making progress because he’s working really hard and he’s been out there on the field and been very consistent for us right now as a worker.”

Schwartz’s speed scares defenses, but it’s only deadly if he catches the ball when thrown his way. His 10 catches came on 23 targets.

“I think that you can develop ball skills with extra work. Whether it’s hand strength or it’s hand-eye coordination or it’s just the ability to track a ball maybe in a contested area,” O’Shea said. “I think there’s different factors and elements that go into actually catching a football, I think all of which you can improve. And certainly he’s improved in several of those areas, and those were some priority areas for him.”

The receiver group has been reshaped since midseason last year. Odell Beckham Jr. and Jarvis Landry are gone, while Amari Cooper was acquired from Dallas to be the No. 1 wideout, Purdue’s David Bell drafted in the third round in April and Jakeem Grant Sr. signed in free agency.

Donovan Peoples-Jones returns as the projected second starter, with Schwartz and Bell in the mix for playing time as the Nos. 3 and 4. Schwartz said he doesn’t view it as a competition with Bell and has lined up inside and outside in practice.

Schwartz’s tough transition to the NFL included a steep learning curve as a route-runner. The Auburn coaches used him on a lot of sweeps and gadget plays, whereas the Browns demand a more complete route tree.

Schwartz is studying one of the best in Cooper.

“There’s not one way to get open. You have to find what works for you and you just have to add to your toolbox,” Schwartz said. “Watching clips of him running slants, even last year he has like 10 or plus different ways that he gets open on a slant.

“Coopie is a great down-to-earth guy. He’s quiet but he gets his work done. He kind of sets that standard. We have to shut up and get our work done. He’s one of the best receivers in this league, so it’s great having a guy like that around.”

Perhaps Schwartz’s most memorable play from last season came in Week 2 against the Texans when he cut short an in-breaking route, resulting in a Baker Mayfield interception and tackle attempt that led to a torn labrum in Mayfield’s left, non-throwing shoulder. Otherwise Schwartz was largely overlooked.

“I would say not really forgotten, it’s kind of what I put out there last year. I didn’t put out enough that maybe fans didn’t have trust in me,” he said. “Hoping this year I’m able to put the trust in both the fans and in the team that I’m here and I’m able to contribute to the team to help us win.”

“I have been really, really pleased with Anthony’s development,” he said. “He works hard. He is a dependable player. I think he is getting really good work in with the quarterbacks.

“I do see Anthony taking a step. I have seen him take a step, I should say. For a young guy, we knew he was always smart, but becoming more comfortable on what he is doing, catching the football really well, so really excited about his development.”

Mike Priefer had plenty of reasons to get excited, and emotional, during offseason of special teams additions
Amari Cooper calm, confident, committed to having big year