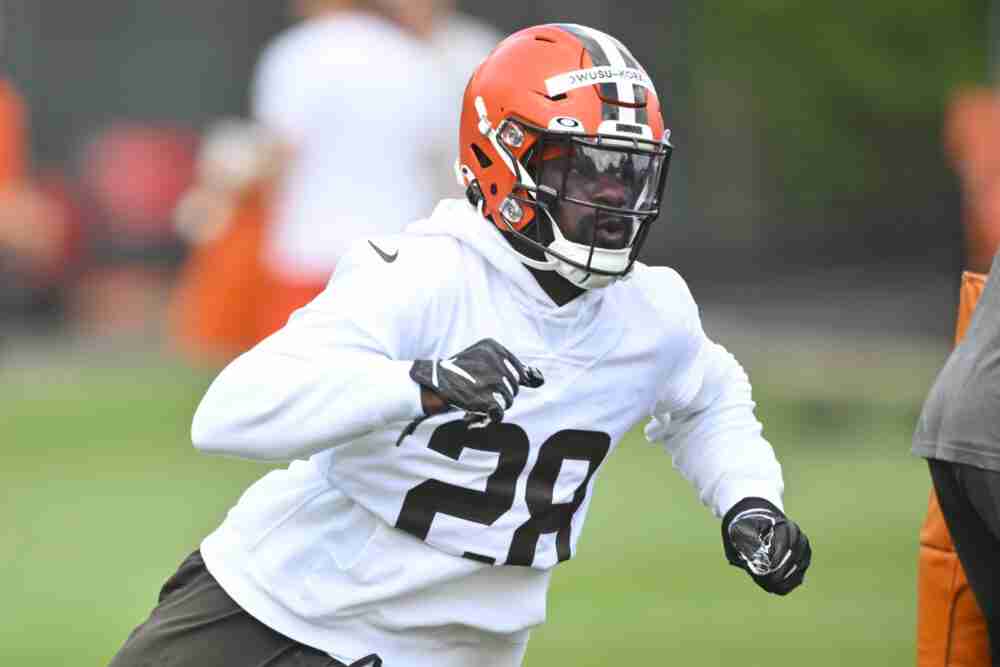 BEREA — Linebacker Jeremiah Owusu-Koramoah was one of a few players who spoke after last season about the need for better team chemistry and camaraderie. He’s seen strides made this offseason, as quarterback Deshaun Watson took more than two dozen members of the offense to the Bahamas and defensive end Myles Garrett arranged a trip to Miami for members of the defense.

“We’re just really trying to build on that camaraderie between the two,” Owusu-Koramoah said Tuesday after the first practice of the three-day minicamp. “It’s been propelling, it’s been going up.”

The second-round pick in 2021 believes the off-field bonding will translate to on-field performance.


“Oh, yeah, absolutely,” Owusu-Koramoah said. “When we talk about the understanding of communicating with each other, team chemistry, there’s very little things that matter. That’s something that we’ve been looking forward to implementing and it’s working well.”

The trip to the Pro Football Hall of Fame on Wednesday is designed, in part, to build chemistry. The team will tour the Hall and have a short practice.

“Just the bus ride down, there are some things that we can do together, which it is nice to be able to ride buses without masks,” coach Kevin Stefanski said. “I just think it is a great opportunity to be around the team, be around each other and then learn about the guys who have come before us, which I think is just so important.”

Owusu-Koramoah, who went to the Hall of Fame recently, appreciates Stefanski’s plan.

Owusu-Koramoah is also excited to be part of the NFL’s first official events in Africa beginning next Tuesday in Ghana, his father’s homeland. The week will include a talent identification camp, a fan event and a flag football clinic, and the league will highlight the contributions of African players to the NFL.

“It’s an amazing thing, of course, just to make sure that the guys understand that Ghana is the center, I would say, of Africa, in reference to bringing across those things that are new,” he said. “So it’s a blessing to be able to go with those guys, to go with NFL Africa and to just be able to have that camaraderie amongst the other guys, the first and second generation from Africa, and we’re looking forward to having more.”

He already traveled to Africa and Israel during the offseason.

“It’s just a state of wholeness, we’ll say,” he said. “A holistic being or a holistic football player. Just being able to connect body, mind and spirit and making sure the balance is there. That’s really the inspiration. Nothing more, nothing less.”

Watson continues to take the bulk of the practice repetitions, despite the uncertainty regarding a potential suspension for violating the league’s personal conduct policy. Stefanski said it’s too early to give backup Jacoby Brissett more snaps.

“I would say we are waiting on more information going into the season. We are not at that point yet,” Stefanski said.

The Browns signed Brissett, 29, after trading for Watson knowing Brissett could be needed to start for at least a chunk of the season. He’s 14-23 as a starter in stops with the Patriots, Colts and Dolphins, including going 1-1 as a rookie in 2016 when Tom Brady was suspended and 7-8 in 2019 with the Colts after Andrew Luck retired unexpectedly.

“He certainly has had ton of experiences packed into that short career,” Stefanski said. “I do have confidence in Jacoby. He has played a lot of football for a young player. He is a smart player. He takes care of the football. Good size, can make all of the throws and those type of things.

“He has been in multiple offenses. Our offense is a little bit different than what he has done previously but has a really, really good understanding of football — football intelligence that is — so I just think he is a really good operator.”

Quarterback Baker Mayfield was the only player not at the first day of minicamp. The team excused him from attending last week.

The Browns are trying to trade Mayfield, and CBS’ Jonathan Jones reported talks with Carolina continue, citing sources. The holdup has been how much money the Browns will pay of Mayfield’s guaranteed $18.86 million salary for 2022.

** Right tackle Jack Conklin wasn’t on the field, as he continues to rehab following surgery in December to repair a torn patellar tendon. He’s been working out at the team facility throughout the offseason.

** Cornerback Greedy Williams and receiver/returner Jakeem Grant Sr. didn’t practice and worked on the side. The injuries weren’t specified, but Grant’s right leg was in a sleeve last week as he watched practice during organized team activities.

“He is working through it, but it is not long-term,” Stefanski said.

** Left guard Joel Bitonio practiced after not participating in the voluntary OTAs.

Stefanski didn’t say if Conklin would be able to practice at the start of training camp in late July but said “I am very confident that he is on schedule.” The hope is he’ll be ready for Week 1 against Carolina on Sept. 11.

“He is working really, really hard. I think he is transforming his body. I think he is getting stronger,” Stefanski said. “Him being here and being around his teammates has been important.”

Conklin, an All-Pro in 2016 and 2020, was missed last year as he was limited to seven games due to a series of injuries.

“Jack is somebody who we really value as a player and certainly as a teammate,” Stefanski said. “He is a tough football player and important to what we do, and we will be excited when he can get back.”

Stefanski said the coaches are “taxing” the players mentally during minicamp.

“It should be hard and they should have to spend extra time because we are just trying to prepare them for in season how you have a lot in that game plan,” he said.