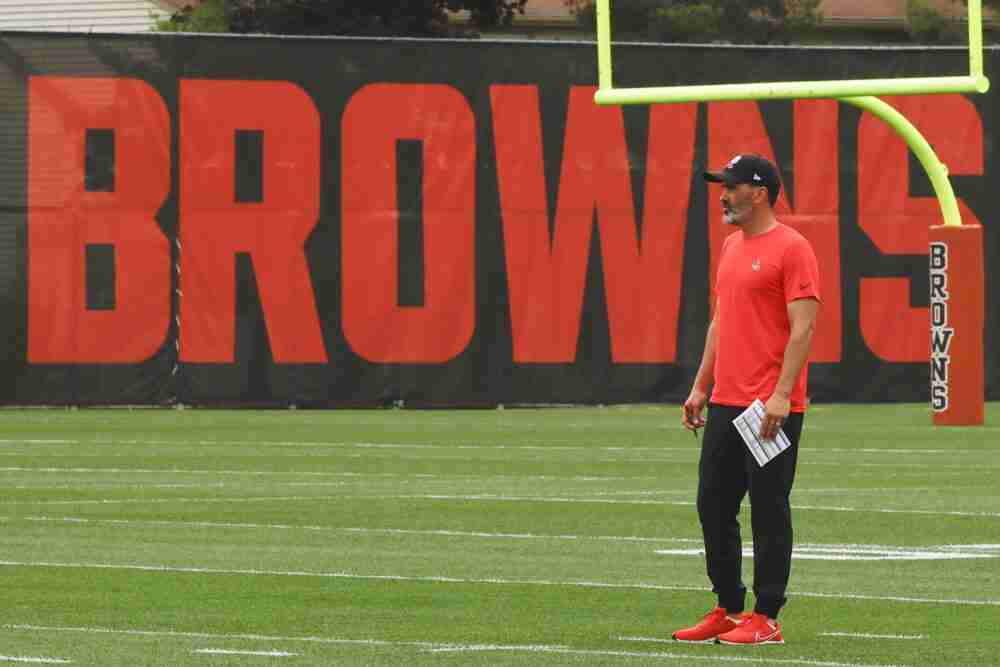 CANTON — A Jim Brown documentary on the bus, a Paul Brown bust and a Marion Motley statue being built. A determination to cap a career with induction into the Hall of Fame. Time together away from the field to tighten the bond.

The Browns’ trip Wednesday to the Pro Football Hall of Fame covered a variety of areas and even included a half-hour practice on the middle day of the three-day mandatory minicamp.

“Such an amazing venue with the history of football in our backyard,” coach Kevin Stefanski said. “Really trying to take advantage of really every one of these minutes to remind ourselves of just everything that has come before us with the NFL and our storied franchise.”


The history lesson began on the caravan of buses with a viewing of “A Football Life: Jim Brown.” After practice, former NFL receiver Keyshawn Johnson and NFL writer Bob Glauber gave a presentation on their book, “The Forgotten First,” about the men who broke the league’s color barrier. Browns Hall of Famers Motley and Bill Willis were part of that foursome, and members of their families were guests of the Browns.

All-Pro left guard Joel Bitonio was drafted in 2014 and is the longest-tenured member of the team. He’s grown to appreciate the franchise’s history despite the struggles of the past three decades.

“You kind of look back and it was before the Super Bowl era, I mean 17 Hall of Famers, multiple championships, some of the best players to ever play the game, innovators, some of the best coaches to ever (coach) the game have come through here,” he said. “You get a respect of why the Browns fans are the Browns fans, the way they are. There’s such a history, and they want to get back to that point.

“It’s pretty amazing some of the stuff the organization has done over the years.”

Linebacker Anthony Walker Jr. liked the change of scenery, comparing it to field trips to the aquarium and Chuck E. Cheese when he was a kid in school.

“The consistent grind from Phase 1 all the way to mandatory minicamp, that’s what it’s about, and then you get a chance to experience cool things like this,” he said, referring to the two-month offseason program.

Stefanski wanted to break up the monotony, but his first priority was getting the players to establish a connection with the past.

“I think it is important honestly for all of us in any walk of life to know the people who walked that path before you,” he said. “My job as the head coach of the Cleveland Browns is finite. I will not have this role forever. I know people have come before me. I know there will be people who come after me. Just trying to learn about the past and respect the past is just so important.

“We have been digging into that. It is such an important franchise … and trying to go to school a little bit with our team and understanding who those statues are outside of our stadium, because it is pretty important stuff.”

The list of Stefanski’s immediate predecessors isn’t exactly a who’s who — Freddie Kitchens, Hue Jackson, Mike Pettine, Rob Chudzinski, Pat Shurmur — but the trip down I-77 provided the chance to reflect on the first man to hold his job — Hall of Famer Paul Brown.

“It is hard to let your mind go there because you have a job to do,” Stefanski said. “You would slow down if you thought about somebody like that who has come before you. Certainly I am very respectful of the people who have been before me.”

“Understanding the history is always the most important thing because if you understand the history, you can strive for the future,” he said. “That’s what we’re trying to do right now. We always respect the people that played before us and give those people those flowers and those roses. We definitely want to play for them and continue to win for them on Sundays.”

All-Pro defensive end Myles Garrett joined the team on the field but not on the tour of the Hall, a league source confirmed. Garrett told reporters Friday he didn’t want to enter the museum until he meets his goal of being enshrined.

“I understand his feelings on that,” Stefanski said before the tour.

Garrett was the No. 1 overall pick in 2017 and entered the league talking about making the Hall of Fame. His career is on the correct trajectory with three Pro Bowl appearances, two straight first-team All-Pro honors and 58.5 sacks in 68 games, including 28 over the last two seasons.

“I expect nothing else from him,” Walker said. “It’s kind of early right now, but I say he’s a shoe-in. We’ll see.”

Bitonio doesn’t have the same national profile as Garrett, but general manager Andrew Berry and former left tackle Joe Thomas have said he’s having a Hall of Fame career. Bitonio’s made four straight Pro Bowls and was a first-team All-Pro for the first time last year.

“There’s so many great players in the NFL that you’ve just got to play the game and really see what happens,” he said. “There’s so much that goes into it. You can have the credentials, it’s a vote at the end of the day.

“For me, it’s just pushing myself to be the best player I can be, and then at the end of the career, we’ll see what happens.”

Walker, in his sixth year in the NFL, had never been to the Hall. He wanted to visit earlier this year but waited when he learned the team would be going.

“To see it finally and to experience it will be great for me,” he said.

Walker also valued the latest team bonding event, which followed the offense’s trip to the Bahamas, the defense’s weekend in Miami and an organized team activities practice spent shooting baskets at the Cavaliers’ practice facility. He didn’t think the Browns were close enough last year.

“I’ll be completely honest, when I was in Indy, I thought that we established that culture there,” he said of his four years with the Colts. “And when I came here, it was a little different. And I’m starting to feel what I felt in Indy when I was there. Just the brotherhood that we had, all the guys coming together, the team camaraderie.

“Last year it was a little standoffish and a lot of guys, again, this is professional football, so I get it. But to be a great team you’ve got to have that camaraderie, you’ve got to have that team mindset because when you go through the dark days, sometimes you may lose, or the dog days of camp, the dog days of this grind and minicamp and everything like that, you need that team brotherhood, that team bond to keep bringing you together. And I’m glad that we’re building that.”

He blamed COVID-19 restrictions and adjustments in the building for the issues last year and pointed to the high participation rate in the voluntary offseason program this year as a sign of progress.

“So just to have the whole team together I think will be the biggest difference,” Walker said.