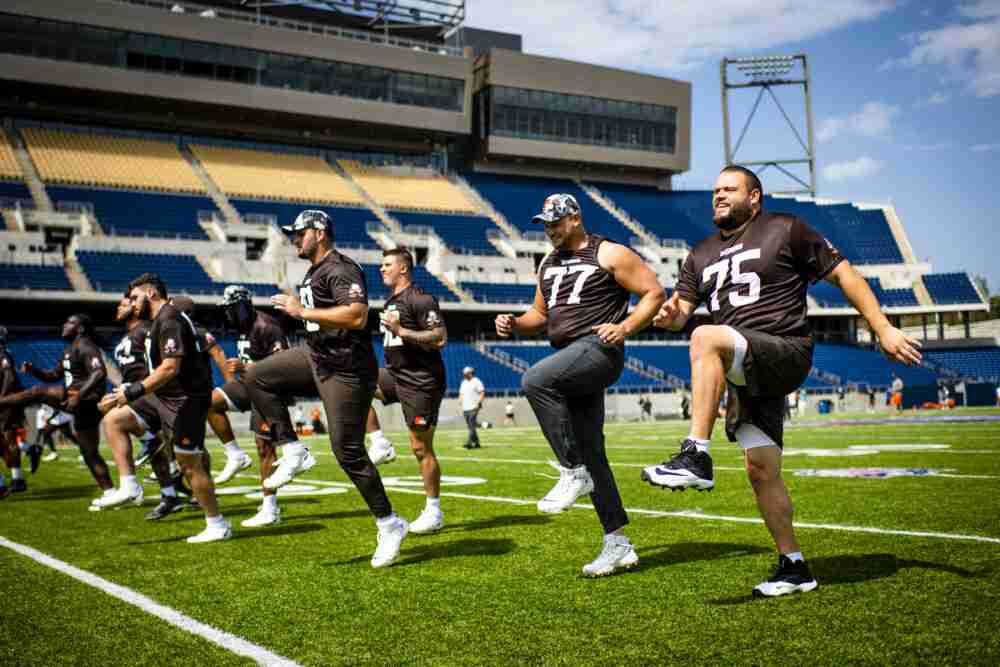 CANTON — Baker Mayfield’s days with the Browns are numbered, but he’ll always have a special place in Joel Bitonio’s heart.

“Baker was my guy. I still remember the Thursday night Jets game when he came into the game and helped lead us to victory and that was honestly one of the more special moments in my career just because it had been so long since we won games,” Bitonio said Wednesday, referring to Week 3 of Mayfield’s rookie season in 2018. “And he’s a tough guy and he played his heart out for us and I’ll always respect that.

“He’s still a friend of mine. We text occasionally and I think like everybody else, he’s kind of waiting it out to see where he’s going, but Baker did a lot of for this franchise. He won a lot of games, he was a great player for us and I’ll always be a friend.”


The Browns traded for three-time Pro Bowl quarterback Deshaun Watson in March to replace Mayfield and are trying to trade him. Mayfield also wants out and was excused from mandatory minicamp this week.

The trade market hasn’t been robust for Mayfield, but Bitonio believes he’ll land on his feet.

“He’s always had that chip on his shoulder and I’m sure it’s continued to get bigger and bigger,” he said after a short practice at Tom Benson Hall of Fame Stadium. “A team’s going to give him a chance. I know the contract situation is working itself out. but he’ll get a chance to play. Quarterback’s such a scarcity in the league that he’ll get a chance to play and perform again.”

Bitonio understands why the organization made the move to Watson.

“He’s a heck of a football player,” he said. “I’ve played against him. He does some things on the field that are really special, really unique.

“I crossed over with him at the Pro Bowl a couple times and had the trip to the Bahamas where I got to know him. All that stuff is in court and they have legal battles to go through, but in this NFL, you’re trying to get better, you’re trying to find ways to win, and Deshaun Watson is a special football player.”

Watson’s status for the season is in doubt, as the NFL could suspend him if it finds he violated the personal conduct policy. Two Texas grand juries declined to indict him, but he faces 24 civil lawsuits alleging sexual misconduct in massage therapy sessions.

“I can’t really control much with it, so I try not to worry about those things,” Bitonio said. “I think we have really good quality backup quarterbacks that have played a lot of football in Jacoby (Brissett) and Josh (Dobbs).

“It’s one of those things that it might happen, it might not, we don’t know. And we can’t truly worry about it, but if it does, I think we have the right character in the room to handle that adversity.”

Bitonio skipped the voluntary portion of the offseason program, so his first practice was Tuesday. He doesn’t think he missed anything.

“I missed nine OTA practices, you know what I mean? But besides that, mentally, I had the iPad,” he said. “I was able to look at the film when I needed to. Got back out to practice yesterday. It felt pretty good to be out there. I didn’t feel like I was behind or anything like that.”

Bitonio was among many players who skipped the voluntary sessions last year after a push from the players union, including president JC Tretter, who was the team’s center.

“I think the NFLPA just wants it to be voluntary,” Bitonio said. “I just evaluate it on a personal basis and we have two young kids at home and my mom, the kids’ grandma, sister, brother were all there. So I got to be around the family and that was good for me.

“It wasn’t a paid-the-dues thing. It just was the best opportunity for me physically and mentally to be at home with the family.”

WON’T YOU BE MY NEIGHBOR?

Rookie receiver David Bell, a third-round pick, has formed a relationship with Watson, in part by having lockers next to each other.

“He’s coaching me up a lot, even on the off days,” Bell said. “He’ll shoot me a text and say, ‘This is what I’m looking for on this.’ I’ll make sure to correct that next practice. It’s definitely a bond I’m trying to build, but I know it’s going to take a lot to continue to build that trust.”

Bell had rookie minicamp when Watson took more than two dozen members of the offense to the Bahamas but plans to go if Watson sponsors another trip before training camp.

“Most definitely. He talked about it briefly, but I haven’t really got the details yet,” Bell said. “If you’re comfortable with your teammates off the field, it makes it a lot easier for you to trust them on the field, that you’re accountable and you’re in that right spot when your brother needs you.”

Bell arrived with the reputation of having great hands and hasn’t done anything to change the scouting report. He said he’s dropped one pass during the offseason program, in an early organized team activities practice.

“That’s definitely the goal as a receiver,” he said of catching everything. “The quarterback trusts you to make those catches because they have a lot going on their plate. It’s really an easy job for us because we have to get up and catch the ball and run the right routes.”

The drops are rare for him, so he remembers each one.

“I take it to heart,” he said. “I try to make sure that it doesn’t happen again. Every time I drop a ball, it’s always one minor thing that I didn’t do, whether looking it in or my hands aren’t in the right place. So when I drop a pass, I know why I dropped that pass.”

** Rookie receiver Michael Woods II high-pointed the ball and made a nice catch in the back corner of the end zone on a throw from Brissett.