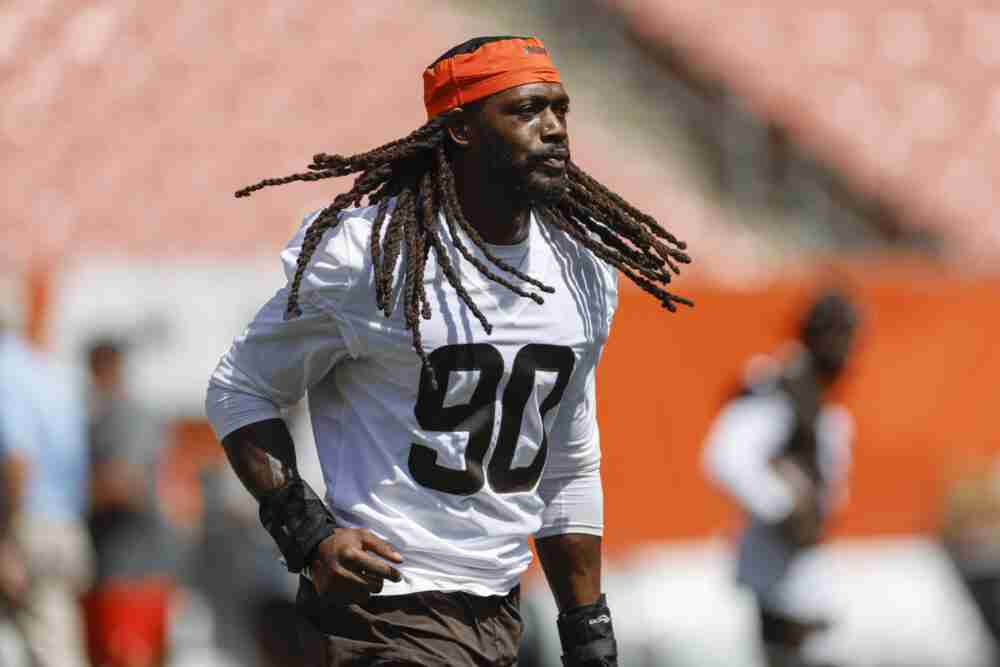 CLEVELAND — Deshaun Watson brought a lot of heavy and serious baggage to the Browns.

He also brought back Jadeveon Clowney.

Clowney, a three-time Pro Bowl defensive end, re-signed on a one-year, $10 million contract. He liked his time with the Browns last year and being paired with All-Pro end Myles Garrett, but the trade for Watson sealed Clowney’s return.

Clowney and Watson played together in 2017 and ’18 with the Houston Texans. Watson, a three-time Pro Bowl quarterback, faces 24 civil lawsuits alleging sexual misconduct.

“I was all about where my boy Deshaun was going,” Clowney said Thursday after the final mandatory minicamp practice at FirstEnergy Stadium. “When I talked to them, I said, ‘I played with him, he kept us off the field a lot.’ I was like, ‘I know you’re going to keep us off the field, you put up a lot of points, put us in rushing situations instead of having to stop the run all the time.’

“I just wanted to go play with him and see what I can do with him again.”

The Browns traded for Watson on March 18, but Clowney didn’t agree to re-sign until May 22. Throughout his career he hasn’t been in a hurry to pick his next team in free agency but apparently had made up his mind.

“I talked to him a few times before he signed, after he signed,” Clowney said of Watson. “We stayed in touch through that whole thing about coming here.

The Browns, Falcons, Panthers and Saints were the finalists for Watson, who controlled where he’d be dealt due to a no-trade clause with the Texans. After initially eliminating the Browns, Watson agreed to join them and signed a five-year, fully guaranteed $230 million contract.

Clowney, 29, was asked if he’d have signed with Atlanta if Watson had chosen to go there.

“I probably would have followed him there,” Clowney said. “But who knows? He ended up here. We’re here now. That’s over with. Let’s go. We’re chasing it now.”

Clowney’s decision to rejoin Watson came with the awareness Watson could be suspended by the NFL for violating the personal conduct policy.

“That’s all right. We’ve got a good defense, we can hold it together,” Clowney said. “We did good last year and we were banged up on offense all over the place and our defense played well for what we had going on. We’ve got the same defense back, couple additional pieces. We’re going to be all right.”

Clowney obviously isn’t thinking about Watson being suspended for the entire season, which is a possibility. The number of lawsuits will grow, according to Tony Buzbee, the plaintiff for the attorneys, and Watson’s situation continues to draw negative headlines.

“I told him that’s a lot of pressure for what he’s dealing with, but for him to just handle the situation the way he’s doing, I think he’s doing a good job,” Clowney said. “He doesn’t say much. He comes in here and works every day, he doesn’t let it bother him, mess up his job, to work. Hope the best for my quarterback.”

Clowney doesn’t bring it up with Watson, who continues to deny any wrongdoing.

“Naw, that’s his personal biz, I don’t get into that,” he said. “Only football. I don’t even have to ask him what’s going on. They put it all out there, so I try not to ask him.  I’m sure he don’t want to talk about it.”

“He’s an athletic freak,” Teller said. “He comes in, he’s professional, he works extremely hard, he’s studying, you can tell that he cares about it. I know he wants to win games and I’m thankful to have him in the backfield.

“He’s long, he’s strong, he’s fast, he’s smart, when I say athletic freak, he’s going to be slinging that ball with ease. He’s running, he’s got an arm, he’s smart, he’s got fast feet, it’s all got to just start coming together.”

Regardless of Watson’s availability, Clowney has resumed his pairing with Garrett, who recruited him to return. After a couple of years of struggles and injuries, Clowney stayed healthy last season and had nine sacks, 19 quarterback hits, two forced fumbles and two passes defensed.

“Me and him did some good things together,” Clowney said. “We got along well. We played well together. We fed off each other.

“We felt like we come here and do the same thing. Even better. That was our first year and we know each other better. We got a good thing going from last year. We want to keep it going.”

Continuity on the defense is important for Clowney.

“Everybody’s back,” he said of the linebackers. “To have the guy behind you already know how he fills and what he likes to do, that makes it easy on myself. That’s what makes it a lot better playing with the same guys instead of bouncing around and trying to figure out who guys are.”

Clowney credited his improved injury situation a year ago with paying better attention to his body and conditioning. He continued that this offseason and believes it’ll again pay off on the field.

“Make way more plays than I did last year,” he said when asked of his goals for the season. “Make more sacks. More TFLs. Just trying to get it going.”

He wants even more from a team standpoint. When he decided to re-sign, he texted linebacker Anthony Walker Jr. “Super Bowl.”

“I told him we were a couple pieces away last year, a couple plays away,” Clowney said. “If I come back, I’m chasing it. Same thing I told Myles, ‘We’ve got to chase that Super Bowl. I didn’t come here just to win eight, nine games, I want to chase the Super Bowl.’ And I think we’ve got a shot. Put it together this year and see where it goes.”

Kevin Stefanski uses trip to Hall of Fame to connect players with history of franchise, NFL
11 training camp practices will be open to fans, beginning July 30