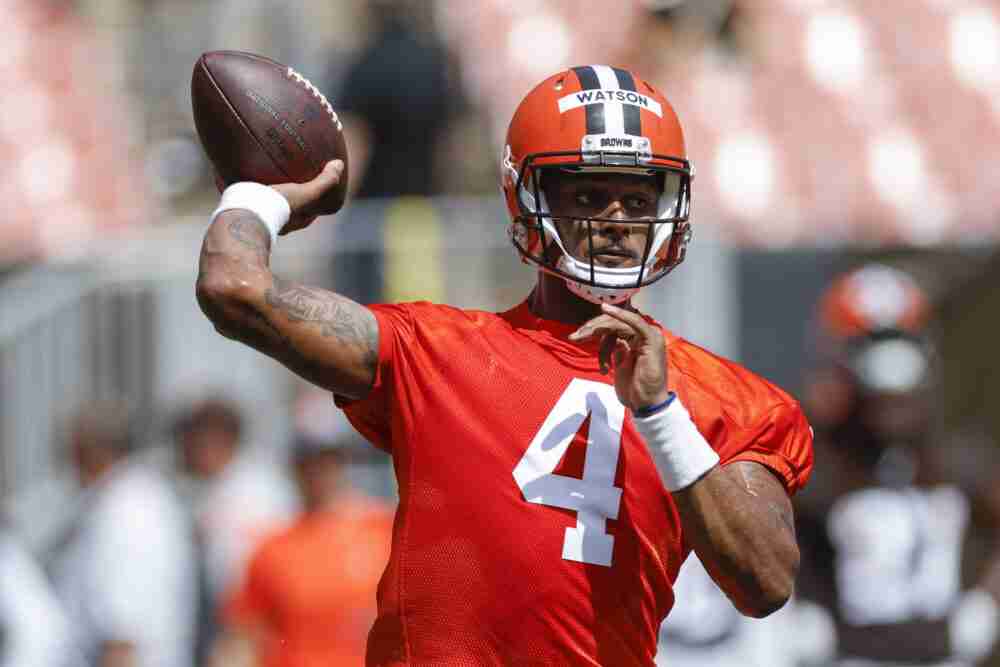 While Deshaun Watson maintains his innocence and fights to clear his name, the Cleveland Browns and football fans everywhere wait for the NFL to determine an appropriate penalty for the star quarterback accused of sexual misconduct by 24 women.

A person familiar with the league’s investigation told The Associated Press a decision is expected before training camp. The person spoke to the AP on condition of anonymity because the investigation, conducted by Lisa Friel and Todd Jones, is still ongoing.

Once it concludes, former U.S. District Judge Sue Robinson, who was jointly appointed by the league and the NFL Players Association, will review the league’s findings to decide whether Watson violated the personal conduct policy and whether to impose discipline.

This will be Robinson’s first case since being hired as the league’s disciplinary officer under the latest collective bargaining agreement finalized in March 2020. Previously, NFL Commissioner Roger Goodell had the authority to suspend players.


The league and the union can recommend a potential length of suspension. If either the union or league appeals Robinson’s decision, Goodell or his designee “will issue a written decision that will constitute full, final and complete disposition of the dispute,” per terms of Article 46 in the CBA.

Watson is not facing criminal charges after two grand juries in Texas declined to indict him. But he’s facing civil lawsuits from 24 massage therapists accusing him of sexual assault and harassment during private sessions when he played for the Houston Texans.

On Tuesday, Watson stood by previous comments proclaiming his innocence.

“I never assaulted anyone,” Watson said. “I never harassed anyone or I never disrespected anyone. I never forced anyone to do anything.”

The NFL has punished several players for violating the league’s personal conduct policy without criminal charges.

In 2010, Ben Roethlisberger received a six-game suspension after being accused of sexual assault by two women. The recently retired two-time Super Bowl champion quarterback for the Pittsburgh Steelers was not charged in either case and didn’t appeal the league’s suspension.

The league promised to get tougher against players accused of violence against women following fallout from Ray Rice’s case in 2014. The former Baltimore Ravens star running back was initially suspended two games for an altercation with his future wife in a hotel elevator. After video emerged of Rice knocking her out and dragging her body out of the elevator, the league suspended him indefinitely. Rice won his appeal and was reinstated two months later but never played in the league again.

Dallas Cowboys running back Ezekiel Elliott received a six-game suspension in 2017 for using “physical force” against his former girlfriend three times in a span of five days resulting in injuries to her face, neck, shoulders, arms, hands, wrists, hips and knees.

New Orleans Saints quarterback Jameis Winston got three games for a sexual harassment accusation in 2018 when he played for Tampa.

Overall, more than 20 players have received suspensions for violating the personal conduct policy since 2014.

The league is well aware of public opinion in Watson’s case. The person familiar with the league’s internal discussions told the AP the NFL has learned from past mistakes of leniency in cases involving violence or sexual assault against women and that the allegations against Watson are severe enough to warrant a strict penalty.

Marc Ganis, the president of sports consulting firm Sportscorp Ltd., said the league can’t punish Watson based on the majority view. Of course, the NFL’s disciplinary process is set up to avoid emotional and reactionary punishment.

“Public sentiment should not be the driving force behind a punishment,” he said. “It should be facts, information and it should be whether the behavior rises to the form of punishment for a player. The problem that Deshaun Watson has isn’t the court of public opinion, but even if he did what he acknowledges having done, it’s still problematic and at least a level of unusual activity for an NFL player and can be misconstrued as misconduct.”

It’s possible Watson would be required to agree to counseling. He raised plenty of eyebrows with his “no regrets” comments March 25, when he was introduced by the Browns after they persuaded him to waive his no-trade clause and signed him to a fully guaranteed five-year, $230 million contract despite his legal troubles.

Watson has acknowledged that comment may have negatively affected others.

“That includes males, females, everyone across the world. That’s one thing I do regret is the impact that it’s triggered on so many people.”

“We think it would be appropriate to see Deshaun Watson express some regret or remorse in the way he treated these women, some of which have sued and many others haven’t, yet,” Buzbee said in a statement. “Attending some sort of counseling would be at least some step forward. We have nothing else to say on the subject.”