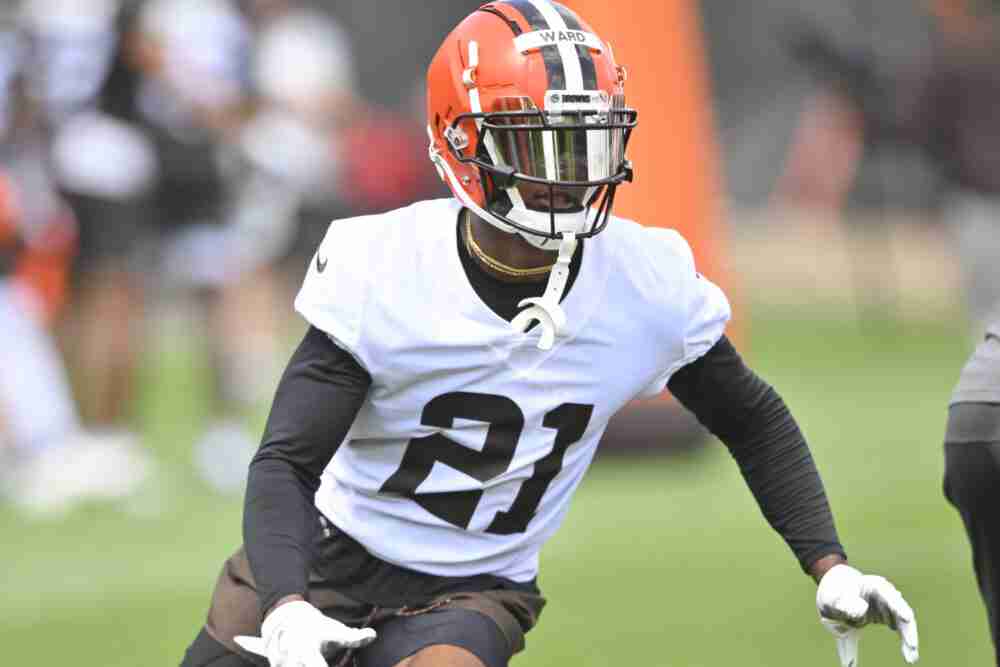 Ward, who signed a five-year, $100.5 million contract extension in April, had his left shoe off and a member of the medical staff appeared to check his lower left leg on the bench Thursday during the last of three mandatory minicamp practices. Ward then walked slowly into the locker room at FirstEnergy Stadium with another member of the athletic training staff. Ward didn’t return to practice.


He was asked the severity of the injury.

“I don’t have enough details to say yet,” Stefanski said. “We will update you.”

Ward, 25, is the team’s No. 1 corner. He was the No. 4 pick in 2018 and made his second Pro Bowl last season after three interceptions, including a 99-yard return for a touchdown in a win over the Bengals, and 10 passes defensed.

Greedy Williams, the third cornerback, didn’t practice during minicamp with an undisclosed injury. He rode the stationary bike and worked on the side.

Ward has 10 interceptions, 50 passes defensed and two touchdowns in four years, establishing himself as one of the league’s top cover guys. The only knock is that he missed a few games in his first three seasons with minor injuries. He was sidelined for three as a rookie and four each the next two years.

Catherine Raiche has been working as assistant general manager and vice president of football operations for a while, but the team finally announced the hiring, along with six others to the football operations staff and several promotions and role changes.

Raiche is the highest-ranking female football executive in the NFL. She came from the Eagles, where she oversaw all areas of football operations and player personnel, and will help manage the day-to-day operations and contribute to roster decisions. Before entering the NFL she worked as assistant GM in the Canadian Football League.

Glenn Cook was promoted to assistant GM and vice president of player personnel. He’s starting his seventh year with the organization.

“We have a number of talented people from various backgrounds that will maximize our efforts to create sustained success,” GM Andrew Berry said in the news release. “We look forward to these staffing changes reinforcing the diverse, multi-disciplinary and collaborative work environment we strive to create.”

Stefanski sent the players into their six-week break before training camp with a message.

“No. 1 is to be safe,” he said. “As a coach, you hate when your team is traveling all into the globe and you want everybody to be safe — you want them to have fun, like I mentioned you want them to charge the battery but definitely be safe and make great decisions when they are away from here.

“Then they have to come back in the best shape of their lives. That is kind of what you have to do every time you are getting ready to start training camp.”

The Browns hosted alumni for practice and then had a barbecue for them and the team.

“We were fortunate to have some alumni out here today to visit with us, which we felt was really important,” Stefanski said. “We have talked a lot about our alumni over the course of these weeks, so to be able put some faces to the names and introduce the guys to some of these great players was a big deal.”

Rookie kicker Cade York, a fourth-round pick, signed his contract. That leaves defensive tackle Perrion Winfrey as the lone member of the nine-man draft class yet to sign. Winfrey was the No. 108 pick and York No. 124.

York ended a successful field goal drill with a 50-yarder into the west end zone.

** Demetric Felton continued to work at receiver, rather than running back.

** Cornerback Herb Miller made a nice interception of a pass from Deshaun Watson to tight end David Njoku.

** Rookie receiver David Bell grabbed a high throw over the middle for a touchdown.