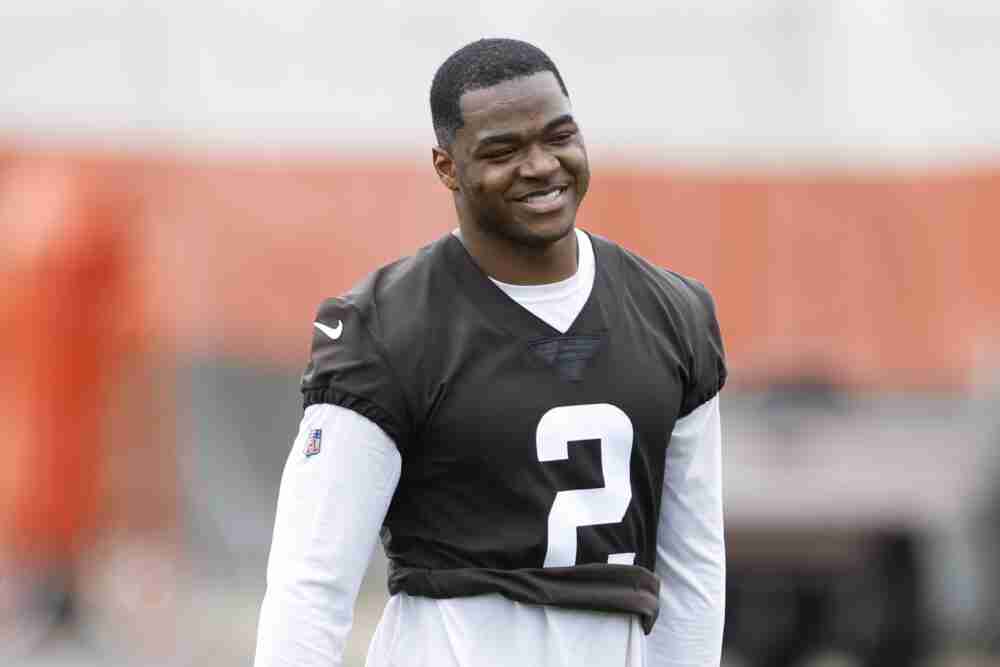 CLEVELAND — Amari Cooper’s quiet demeanor shouldn’t be mistaken for a lack of confidence.

While the Browns’ new No. 1 receiver doesn’t speak much above a whisper and isn’t prone to histrionics, his thoughts are clear and his words powerful.

“I don’t really feel the need to compare myself to other receivers because I feel like everything a receiver should embody I think that I can do,” Cooper said Thursday after the Browns concluded mandatory minicamp. “I can high-point the ball, I can run great routes, I can create separation, I can win at the line of scrimmage, I can win at the top of a route. Everything that you need a wide receiver to do, I can do it. So there’s no need to compare myself to another guy. I can check all those boxes perfectly fine.”


The Browns sent a fifth-round pick to the Cowboys and swapped sixth-rounders to acquire Cooper on March 16. After the Browns had four years with Jarvis Landry as the leader of the receivers and 2½ years with everything Odell Beckham Jr. encompassed, Cooper is the alpha male and the only proven commodity in the room.

He turned 28 on Friday and doesn’t think he’s reached the best version of himself.

“Oh, no. Definitely, definitely not,” he said. “But I look forward to doing that here. I think the opportunity here is great.

“I’ve been given a lot of opportunity here throughout the course of the practices that we’ve had, and I just look to build on those opportunities. And hopefully as I continue to make plays when the games start rolling around, I get all those opportunities in the game to show that I’m that guy. That’s what I’m really looking forward to.”

General manager Andrew Berry was ahead of the curve during the offseason, landing Cooper without giving up much and inheriting his contract of $20 million a season. The receiver market then blew up.

“That’s just the business, you know what I’m saying?” Cooper said. “At some point, you move on, you play for different teams, but really I’m just focused on being where my feet are. I’m focusing on the present, focusing on the opportunity that’s at hand right now and I think this is a tremendous opportunity for me and for the Cleveland Browns. I think I can do some really great things here and I look forward to it.”

Cooper believes he’s positioned himself for a big year. He’s the clear-cut No. 1 wideout and was a regular participant in the voluntary offseason program, learning the offensive system and building chemistry with new quarterback Deshaun Watson.

“I think I accomplished a lot,” Cooper said. “I have a real good understanding of the playbook and the things we want to do on offense because we’ve installed pretty much everything to this point. I can visualize how the offense will be ran and how we can be explosive and how we can be dominant.

“I feel like we got a lot accomplished. Other than the playbook, just the timing with the quarterbacks. Me and Deshaun, we’ve been able to complete a lot of passes. We’ve had a lot of success and the success that we didn’t have, we were immediately able to fix it. The timing has been great. The communication has been great, and I’m just looking forward to actual training camp now.”

Coach Kevin Stefanski was immediately struck by Cooper’s presence at 6-foot-1, 210 pounds and further impressed when he got to know him.

“I think for anybody that first meets him, Amari’s size. He is a big, physical player — maybe not 6-6 but you see how strong he is,” Stefanski said. “That has been impressive just seeing how he operates on the field. A really impressive worker in the classroom. He is a pro’s pro.

“I do not think there is anything that we have challenged him with mentally that he does not just get immediately. His intelligence, football intelligence is very impressive.”

Cooper expects to know the offense inside and out by the time he comes back for the start of training camp July 27. He’s been through the drill with the Raiders and Cowboys.

“I think I’ll master it in this six-week break that we have. I’m taking my iPad with me and I’ll be studying the whole time. I think by the time I come back for training camp, I’ll have all the details ironed out.”

“Amari’s been outstanding. He comes here as a veteran player that’s had production obviously in this league, but I can’t say enough about his overall work ethic, his intangibles, what he’s brought from a leadership standpoint,” O’Shea said. “And he has been an outstanding worker. I think that he’s come out here, he’s given us his very best every day.”

Cooper uses any time on the field to improve himself and impress others.

“I’ve been blessed with a tremendous talent to play this game, to play this position,” he said. “I love practicing. I love running routes. That’s what I love to do. And every opportunity I get to show off my route-running, to show off me beating a defensive back, I look forward to.

And doing it in Cleveland, which is his kind of town.

“It’s definitely slower paced than the place that I’m from, which is Miami,” Cooper said. “It kind of reminds me of coming out of Miami as a 17-year-old going to Tuscaloosa, Ala. Everything was just a little bit slower and all I had to do was focus on football, which is all I wanted to do.

“I didn’t put an emphasis on having fun in college. Although I did have fun, that wasn’t what I was there for and that’s not what I’m here for. I’m here to be a great player. I still want to accomplish a lot of things and I feel like I can do that here.”