Commentary: Suspend your disbelief, quarterback may still be a position of need for the Browns 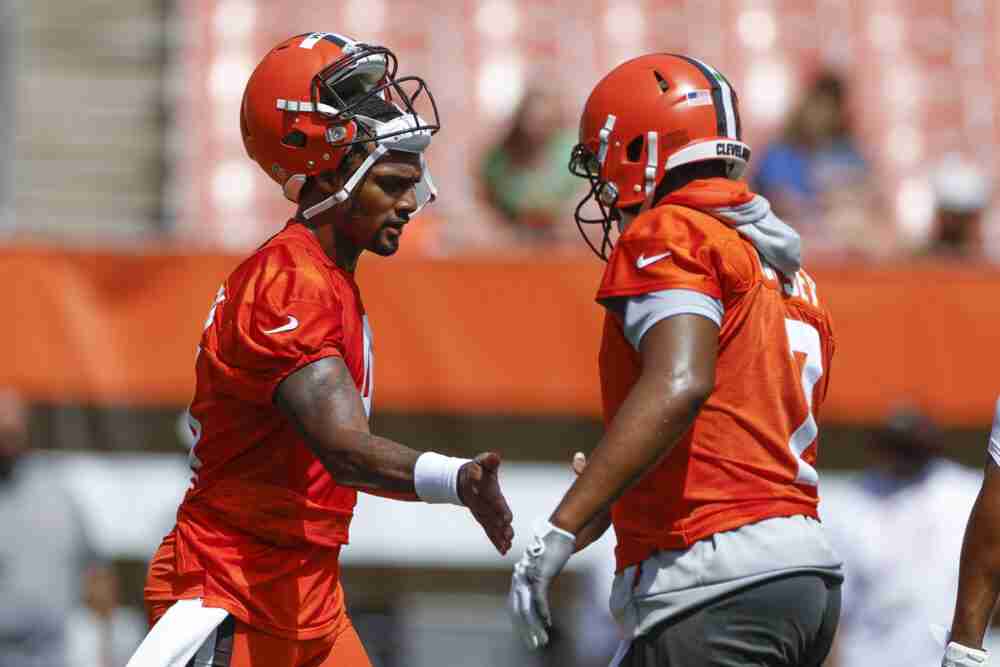 Predictions by all of us unlicensed predictors on what the NFL’s decision will be on the Deshaun Watson case run the gamut.

Here is the gamut:

Watson won’t get suspended at all.

Watson will get suspended for the entire season.


It will be one or the other, or somewhere in between, and there is no way of knowing when that decision will be announced.

Because it seems probable that no matter how this complicated, unprecedented $230 million mess plays out, the chances of Mayfield being the Browns’ Week 1 quarterback are about the same as you or me throwing the team’s first interception of the season.

The bigger question is this: What happens if the NFL levies a full-season timeout for Watson? A one-year suspension. What then?

Then this: Who knows?

What would Plan B be for a team with Super Bowl aspirations but no quarterback?

If something like this was going to happen to any NFL team, it almost certainly would be the Browns. For that reason, and a few others, one would think that Berry, Stefanski and company are already working on a fail-safe quarterback contingency.

Those of us on the outside can only speculate.

Jacoby Brissett? He was hired to be a backup, which is what he’s been for most of his six-year career. Filling in for Watson for four or six games is one thing. For a full season is another. Third quarterback Joshua Dobbs has never started an NFL game.

The fourth quarterback on the roster is Nowhere Man Mayfield.

This whole scenario is so screwed up that the Browns, who, if Watson must sit out the year, would desperately need a quarterback, but they couldn’t possibly bring back Mayfield, because he’s the estranged quarterback.

Ideally, the Browns, should Watson have to sit for a year, would need a proven starting quarterback, which Mayfield is. But from the Browns’ point of view, given all the water that’s passed beneath that burned bridge, bringing Mayfield back would be 13 kinds of awkward for both parties.

However, trading Mayfield for a quarterback who could be brought in to be a pretend Deshaun Watson for a year, does make some sense.

The Browns and Carolina Panthers conceivably could do a straight-up trade of two awkward-situation quarterbacks and hope for, if not the best, then at least not the worst.

Think stop-gap. Because, remember, for the Browns, if Watson gets suspended for a year, they would only need a one-year pinch hitter to keep the position warm for the return of Watson a year from now.

Of course, it’s not an ideal scenario for the built-to-win-now Browns. But this is a franchise that is nothing if not prepared to deal with, and recover from, worst-case scenarios.

There is also one more scenario worth pondering for the built-to-fly-by-the-seat-of-their-pants Browns. That would be trading for the best quarterback in the league that nobody wants: Jimmy Garoppolo.

Last year, Jimmy G quarterbacked the San Francisco 49ers to within one game of the Super Bowl. True, he does have a tendency to make mistakes at the worst possible moments, but his career numbers are far better than his reputation suggests.

In his eight-year career he has a passer rating of 98.9, with almost twice as many touchdown passes (71) as interceptions (38).

Hey, for a one-year rental, the Browns could do a lot worse than a quarterback who led all NFL quarterbacks last year with 12.7 yards gained per pass completion.

Who knows? Mayfield might also be a possible trade chip for the Browns to acquire Garoppolo. The Niners this year are apparently committing to quarterback Trey Lance, the third overall pick in last year’s draft. Mayfield would be the perfect insurance policy if Lance got injured or isn’t ready.

Let’s also not forget that although speculation that Watson may indeed be hit with a one-year suspension seems to be growing, that shouldn’t lessen the urgency for the Browns to find a team willing to take Mayfield, and at least a portion of the money due him, off their hands.

These are two separate issues. The Browns may be forced to wait far longer than they expected to see Watson lead the team out of the tunnel on gameday.

But they can’t let that lessen their urgency to move on from Mayfield.