Johnny Stanton IV proud to speak up as LGBTQ ally 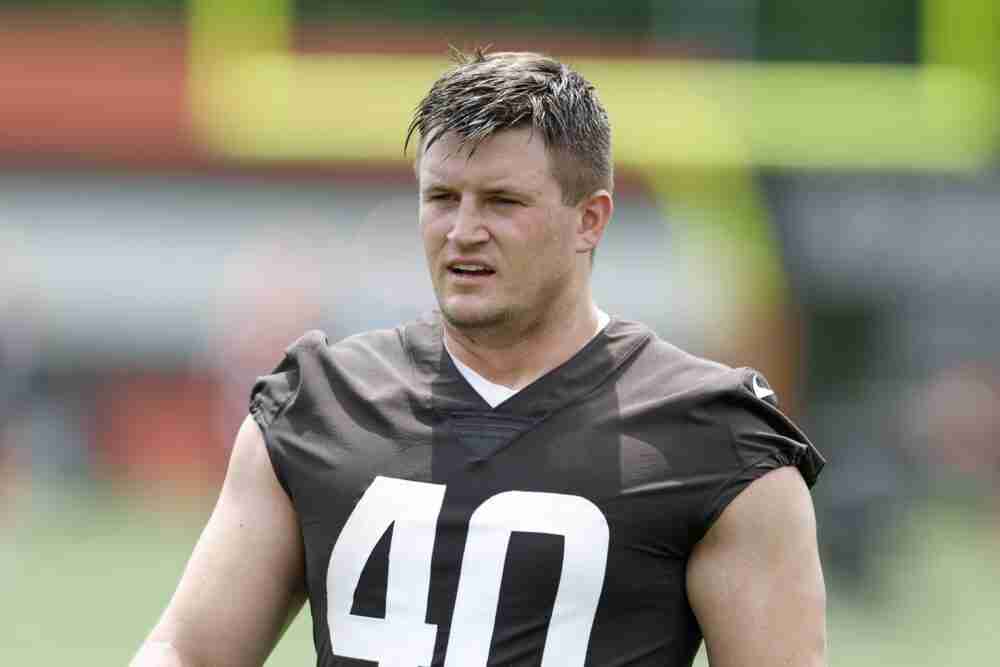 Johnny Stanton IV spent a perfect Saturday in June attending the Pride in the CLE March.

He used the NFL’s My Cause My Cleats initiative last season to support Athlete Ally, whose mission is to end “rampant homophobia and transphobia in sport” and to champion “LBBTQI+” equality.

He lists his pronouns (he/him) in his Twitter bio.

As the only fullback on the Browns roster, the 6-foot-2, 250-pound Stanton is no stranger to head-on collisions and embracing a supporting role. His work as an ally to the LGBTQ community requires much of the same.


“It’s classically known that LGBTQ athletes don’t always feel comfortable coming out to their teammates,” Stanton told The Chronicle-Telegram in a recent interview. “And I want to be part of the culture that changes that. I want sports to become a place for everyone actively, not just passively.”

He’s motivated by the fact that LGBTQ kids drop out of sports at a much higher rate.

“I feel like I have a platform to be able to help make that change,” he said. “I am one of the first NFL players to actively support an LGBTQ organization and that’s really important to me.”

Stanton, 27, had another reason for becoming such a strong advocate. His uncle, Pat Stanton, was an Olympic-level swimmer who didn’t come out until he was done competing.

“To be at that high of a level and not feel comfortable to be able to be your genuine self is heartbreaking to me,” Stanton said. “I don’t want people to have to go through that.”

As he recovered at home from an ankle injury in 2018, Stanton decided to get more involved in the community. He picked the Jessie Rees Foundation, which works with kids with cancer, and Athlete Ally.

“I felt like it was a great opportunity because not only do they focus on bringing LGBTQ athletes to the forefront and fighting for their rights and fighting for their equality, but they also invite straight allies and other people in the sports world to come and be on their side,” Stanton said outside the locker room at Tom Benson Hall of Fame Stadium in Canton. “They do a very good job of combining those things to make everybody feel really welcome.”

One of Stanton’s most noticeable public acts of support was choosing Athlete Ally to go on his cleats last season.

“There was some trepidation, but I felt like the sports world had gotten to a point where it’s ready to see that kind of representation,” he said. “Football is 100 percent ready to move in that direction. And I think that the reaction to it exemplifies that.

“The NFL posting it on their Instagram and having so many of those comments be so positive. Obviously you have your negative comments, but between my posts, the Browns’ posts and NFL’s posts, I think it was overwhelmingly positive and I still get messages from people saying that they really appreciate that kind of representation, that kind of support.”

Stanton might not have had the courage to wear the cleats without then-Raiders defensive end Carl Nassib, who was drafted by the Browns in the third round in 2016, coming out last year and being the first out gay man to play in regular-season games.

“I celebrate him and I think it’s amazing the bravery to be able to come out while active,” Stanton said. “And I’m not sure I would’ve felt comfortable coming out as an ally if he hadn’t already made that movement.”

Stanton’s role as an ally comes at what feels like a critical time.

Many people are worried the Supreme Court overturning Roe v. Wade will lead to the repeal of LGBTQ rights gained in recent years. Ohio is one of several states that have established or are trying to enact laws restricting the participation of transgender athletes. And five members of the Tampa Bay Rays declined to wear Pride patches on their uniforms.

House Republican lawmakers in Ohio started June — Pride Month — by passing a bill that would ban transgender girls and women from participating in high school and college athletics. It also includes a “verification process” of checking the genitals of those “accused” of being trans.

Stanton made it clear this type of bill isn’t trying to solve a competitive “fairness issue.”

“It’s not a problem first off,” he said. “There have been very, very, very few trans athletes in Ohio sports, and to create a bill to try to solve a problem where there isn’t one is very frustrating.

“On top of that, a trans woman in women’s sports isn’t something to be afraid of. They are a woman just like cisgendered women and they need to be shown support. The science doesn’t back a lot of what they’re trying to say. And the research shows that with hormone therapy there is an equal playing ground. So it just shows that they’re not creating bills on something they’re educated on.”

Stanton knows his impact is limited, so he tries to be as visible as possible.

“I’m not asking anything of anyone else. I am just being my own person,” he said. “And trying to raise my voice when it is appropriate. And when it is needed.”

He did the same when Roe v. Wade was struck down last week.

“Horrific. We knew it was coming and it doesn’t hurt any less,” he tweeted.

Stanton said he’s received “overwhelming support” within the organization and in public. But the hate seeps through on social media, often regarding Stanton listing his pronouns on Twitter.

“It’s important because it shows to people who do have to use pronouns in their Twitter to make a point about their own identity that it’s not an awkward, weird thing,” Stanton said. “It shows support for the people who do have pronouns in the bio because they might get misgendered. So it’s important to me because it shows that on my page, my profile is a supportive, safe space.”

Why are you so afraid of pronouns? You used two in that sentence. https://t.co/qX5q6R9DFZ

He said he’s past being bothered by those who attack him for it.

“I’ve had so much more support with it that it really doesn’t make a difference to me anymore,” he said. “I kind of chuckle and just delete and block usually.

“As an ally, it’s part of my responsibility to take on those prejudiced people, the bigots who want to try to talk down and harass the people as part of the community. As an ally it’s important to me to shield a little bit of that hate. I’m completely OK with weathering those messages.”

Had an amazing time visiting @SchoolofOneCLE at the @LGBTCleveland to start of Pride Month. Each of these kids were absolutely wonderful and the school does awesome work for the community in Cleveland. So happy to have been invited by such a great organization. pic.twitter.com/URskegCEcG

Whether Stanton is posing for pictures at the Pride March, visiting the LGBT Community Center of Greater Cleveland or interacting with people on social media, the impact he feels runs both ways.

“I would be doing it even if I wasn’t getting the positive reaction,” he said. “But every time I do get somebody coming up to me or sending me in a DM or a tweet that it means a lot to them, it just makes me that much more forceful in my allyship.”

Amari Cooper calm, confident, committed to having big year
Left tackle Jedrick Wills Jr. knows he has to be better this season — and expects to be