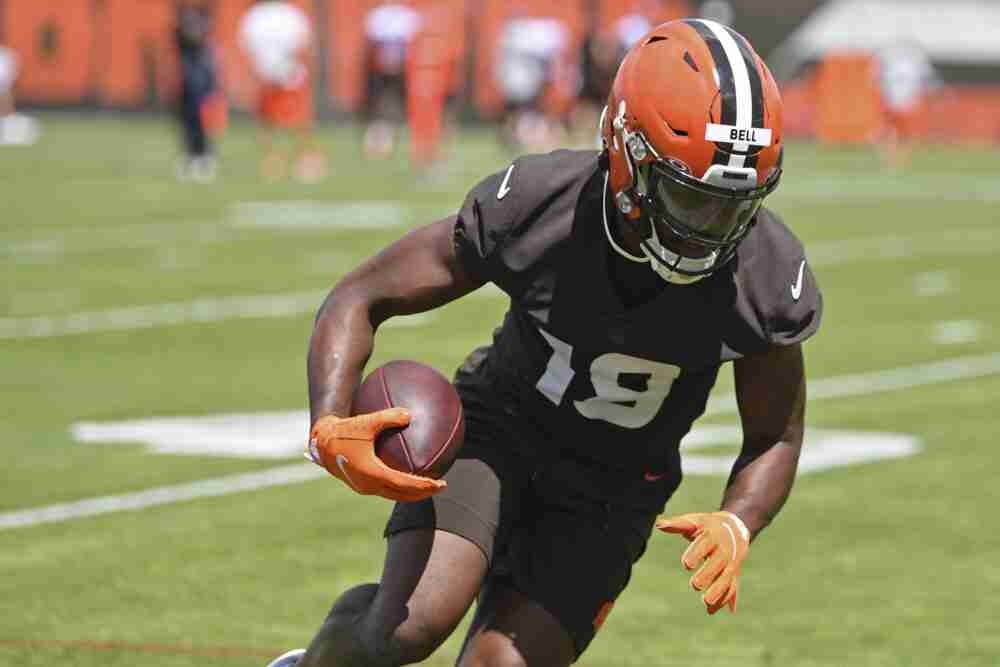 Receiver David Bell reported to training camp Friday with the rookies and quarterbacks, including Deshaun Watson, but won’t be on the field when they practice this weekend.

Bell, a third-round pick, was placed on the active/physically unable to perform list with a foot injury. It’s not considered serious, according to a league source.

Left tackle Jedrick Wills Jr. knows he has to be better this season — and expects to be

Bell, the No. 99 overall selection in April, will count toward the active roster and is eligible to be activated when he passes a physical.


Bell (6-foot-1, 212 pounds) is expected to have a significant role in the offense, including as a slot receiver. In three years at Purdue, he caught 232 passes for 2,946 yards, a 12.7 average and 21 touchdowns. He was voted the top receiver in the Big Ten.

Browns veterans are scheduled to report Tuesday, with the first full-squad practice Wednesday in Berea.

Quarterback Josh Rosen’s signing became official Friday afternoon. He worked out for the Browns on Thursday and agreed to a one-year deal.

Rosen, 25, joins Watson, Jacoby Brissett and Josh Dobbs on the quarterback depth chart. With Watson facing a potential suspension after being accused by more than two dozen women of sexual misconduct during massage therapy sessions, the Browns felt it was necessary to add another quarterback.

Rosen, the No. 10 pick of the 2018 draft by the Arizona Cardinals, is expected to slot in behind Watson and Brissett on the depth chart. Rosen would likely be the backup to Brissett if Watson is suspended for the start of the season as expected.

Independent arbitrator Sue L. Robinson, a retired federal judge, has yet to hand down a judgment on whether Watson violated the NFL’s personal conduct policy. There’s no set timeline, but a ruling and potential punishment are expected within the next week.

Rosen went 0-3 with the Dolphins in 2019, then spent most of 2020 on Tampa Bay’s practice squad before being signed to the 49ers’ active roster Dec. 23. He played sparingly off the bench last year with the Falcons, completing two of 11 passes for 19 yards with two interceptions.

Defensive tackle Perrion Winfrey, a fourth-round pick, signed his four-year rookie contract. He was the last of Cleveland’s nine selections to sign.

Winfrey is expected to be part of the rotation in the interior of the line. He was a second-team All-Big 12 selection the last two years at Oklahoma and was voted the Senior Bowl MVP.