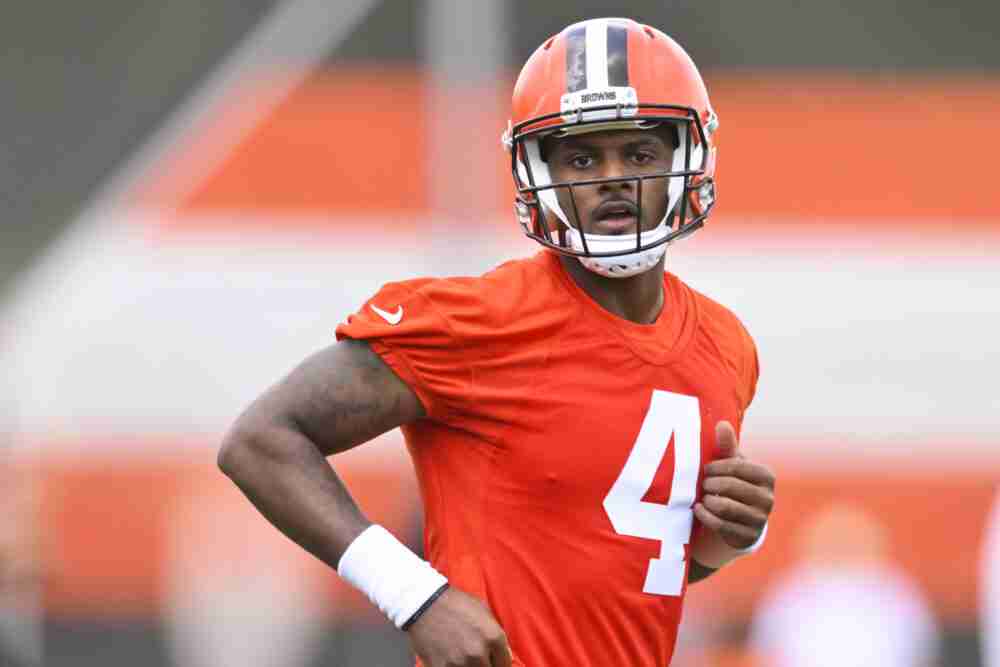 BEREA — Deshaun Watson worked with the first-team offense on the first day of training camp Wednesday, sharing a huddle with Joel Bitonio, Amari Cooper and Nick Chubb, to name a few. Watson called plays, threw passes and handed off the ball in the walkthrough in the field house that lasted less than an hour.

It’s doubtful Watson will be in the same position Sept. 11 for the opener in Carolina.

The NFL world continues to await a ruling from independent arbitrator Sue L. Robinson on whether he violated the league’s personal conduct policy. A suspension is expected for the start of the season, but the length remains a mystery. With no decision made and more than six weeks until the regular season, the $230 million quarterback took his spot with the starters.


Coach Kevin Stefanski is determined to not let the uncertainty at the game’s most important position undermine the preparation and attitude for the season. He wouldn’t even concede he’s disappointed Robinson hasn’t ruled.

“No, I just think that’s the nature of this game. Player availability, we have to deal with that in-game,” Stefanski said before practice. “You get into the fourth quarter or the third quarter of a game and that’s our job to adjust. That’s the players’ job to be ready as next-man-up mentality, as you’ve heard a thousand times before, and it’s our job as coaches to prepare everybody to play.”

He barely acknowledged Watson’s situation is different than an injury, and that learning the fate of his 26-year-old quarterback who’s been to three Pro Bowls and led the NFL in passing in 2020 is important.

He said the Browns are handling any anxiety from the uncertainty and wants his team to put on blinders.

“We just deal with it,” Stefanski said. “That’s kind of our mentality. We’re going to deal with July 27 and then we’ll get to tomorrow and we’ll deal with tomorrow.”

The NFL investigated Watson for more than a year as more than two dozen women accused him of sexual misconduct during massage therapy appointments. He’s denied all wrongdoing, wasn’t indicted by two Texas grand juries and settled 20 of 24 civil lawsuits.

Stefanski reiterated that Jacoby Brissett would take over as the starter if Watson is suspended. Brissett, 29, is 14-23 as a starter but has thrown 36 touchdowns to 17 interceptions in his six-year career, completing 60 percent for an 83.0 passer rating.

“Jacoby, evaluating him before we brought him in here, I think everybody saw a decision-maker, a big athlete and a person who could make all the throws,” Stefanski said. “Then just being around him and being in the meeting rooms with him, I think his ability to lead and his ability to understand defenses, I have been very impressed.”

So has cornerback Greg Newsome II.

“Oh, veteran,” he said of Brissett. “You can tell poise, he’s always going to do the right thing and make sure the ball is in the right spot. He’s been great so far.”

Stefanski said Josh Dobbs has a “leg up” on Josh Rosen in the battle to be the No. 3 quarterback. Dobbs has thrown only 17 passes in the NFL but spent the entire offseason program with the team. Rosen, the No. 10 pick in 2018 who’s 3-13 as a starter, was signed Friday.

Stefanski wouldn’t say how he’ll divide the quarterback reps, just that the coaches have to get everyone ready to play. He said an announcement of a Watson suspension would change things.

“Guys will rotate in there like we always do,” Stefanski said of Watson and Brissett with the first team. “I wouldn’t get into the exact percentage, but they’re both going to get a ton of reps.

“We have a plan, but certainly more information may adjust what we’re doing.”

All-Pro defensive end Myles Garrett said he hasn’t paid much attention to the Watson updates — or lack thereof — and insisted his expectations for the season won’t change regardless of how much time Watson misses.

“We’re going to hold ourselves to a higher standard no matter what happens and our defense is going to do what we do,” Garrett said. “Last time I heard, they can’t win if they don’t score points.”

The opening of camp had a different feel, as fans won’t be permitted until Saturday. The players expressed the typical excitement at the start of a new season, but the Watson situation added an unusual wrinkle.

He’s expected to remain with the team and be eligible to practice even if he’s suspended. He agreed to a trade to Cleveland in March and signed a fully guaranteed five-year, $230 million contract.

Newsome said the distraction fades away when the players enter team headquarters and take the field.

“Obviously we hope D-Wat’s there Week 1, but if he’s not, we’ve got guys that are going to be able to step in and play right away.”