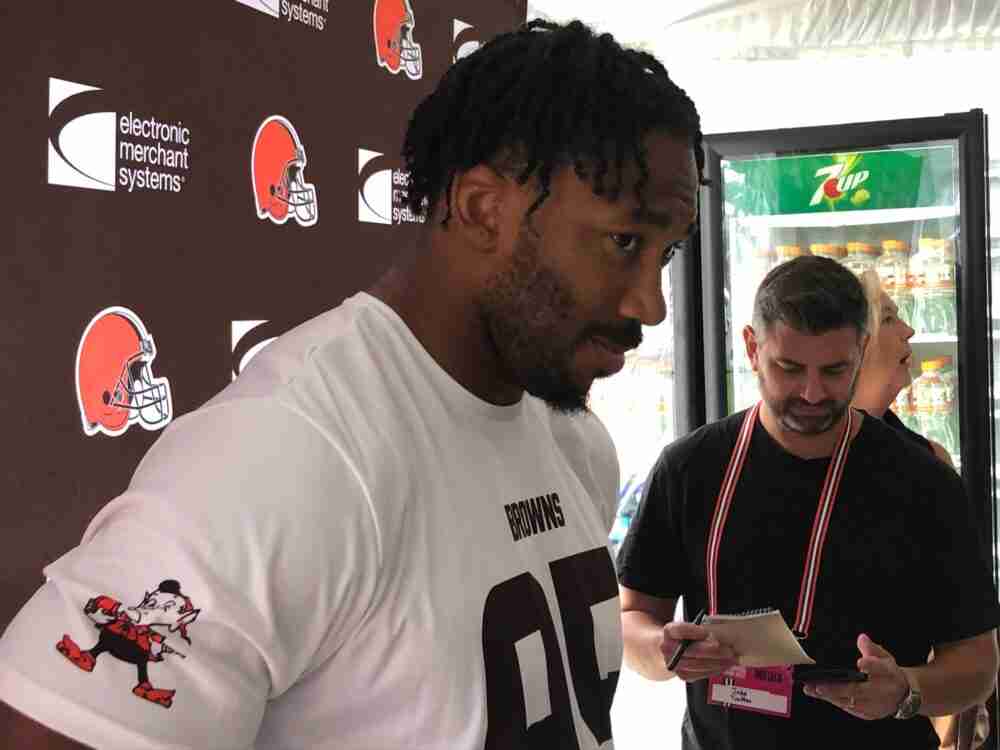 BEREA — Myles Garrett has never been one to shy away from pressure. In fact, he invites it.

From declaring his Hall of Fame goal upon being drafted to easily talking about his quest to be named NFL Defensive Player of the Year and win Super Bowls, the All-Pro defensive end sees purpose and takes enjoyment in placing the burden of expectations on his broad shoulders.

So Garrett’s excited by the assumption that the pressure will be on the Browns defense this season.

“Yeah, it’s all going to be put on us,” he said Wednesday before the first training camp practice. “So go out there and make the most of it, (it will) either crush you or makes diamonds.”


Commentary: Browns and their fans left in dark as they wait on Deshaun Watson decision

Garrett always wants the defense to be the driving force and in the spotlight. But the expected suspension of three-time Pro Bowl quarterback Deshaun Watson — possibly for the entire season — could make it a necessity.

“We’re going to hold ourselves to a higher standard no matter what happens and our defense is going to do what we do,” Garrett said. “Last time I heard, they can’t win if they don’t score points.

“The offense always needs our best, so it’s not going to change when he’s not on the field or he is on the field. We’re always going to do our very best and execute how we know we should.”

That’s the proper philosophy, but it’s only reasonable to assume the defense will need to carry a heavier load if the Browns are to overcome a lengthy suspension of Watson. He was accused by more than two dozen women of sexual misconduct during massage therapy appointments, and independent arbitrator Sue L. Robinson has yet to rule if he violated the NFL’s personal conduct policy and will be punished.

With Watson, the passing offense would be expected to take a big jump from its 27th ranking last year with quarterback Baker Mayfield. Without Watson, who led the league in passing yards in 2020, the running game and defense would be asked to do more to support veteran backup Jacoby Brissett.

“Be yourself. Play the game,” Garrett said of his message to the defense. “You don’t play to the level of your opponent or the level of the offense or special teams, we play up to our standard and what we look forward to doing throughout this whole season no matter how many games he’s out or he’s in.”

Garrett said the defense can be “as dominant as we want to be.” Free safety John Johnson III said that starts with forcing more turnovers than the 19 of a year ago, which ranked 21st.

Garrett had a franchise-record 16 sacks last season as he was named a first-team All-Pro for the second straight year. He had 33 quarterback hits and scored his first touchdown after he forced and recovered a fumble. Fellow end and former No. 1 overall pick Jadeveon Clowney re-signed for a second season, so they’ll lead the way up front.

Second-year linebacker Jeremiah Owusu-Koramoah quickly established himself as a playmaker as a rookie and is expected to be even better, and the secondary is loaded. Pro Bowler Denzel Ward, Greg Newsome II, Greedy Williams, rookie Martin Emerson Jr. and A.J. Green provide talent and depth at corner, and safeties John Johnson III, Grant Delpit and Ronnie Harrison Jr. return.

“Everyone in the building knows we can take us as far as we want to take us,” Newsome said.

Talent is a large part of the optimism equation. Continuity is another. With the exceptions of starting defensive tackles Malik McDowell and Malik Jackson and No. 1 nickelback Troy Hill, all the key pieces are back from a defense that ranked fifth in yardage (311.5 per game) and 13th in points (21.8) and was even better down the stretch, allowing 18.6 points over the last seven games.

“I think we’ll be able to hit the ground running,” Newsome said. “I feel like we’re just a lot more comfortable with each other. Outside of the facility we hang out. I feel like a year does a lot.”

After last season ended with a disappointing 8-9 record and without a trip to the playoffs, Johnson lamented a lack of chemistry.

“It’s a lot different, like the vibe is way better,” he said of this year. “We’ve got a lot of guys back, that continuity is huge, especially on defense, so it’s fun and we’re enjoying it and we can’t wait to get out on the field.”

The defense has reached a comfort level in coordinator Joe Woods’ system, and Garrett credited better consistency for the improved performance as last year went along.

“We were very consistent in our approaches and from drive to drive we weren’t having all these ups and downs, we were staying pretty consistent,” he said.

While Newsome believes the secondary can be the best in the league, Garrett has concerns about the changes between him and Clowney. For the second straight season, he’ll be playing with a pair of new tackles and will try to pull them along. This year, Jordan Elliott, Taven Bryan and rookie Perrion Winfrey are the leading candidates.

“From what I’ve seen they have a very high attention to detail in the classroom, but when the bullets start flying you’ve got to see how attentive they really are,” Garrett said. “When you’re tired and things are moving fast, got to see if you can still stay in the moment, keep it grounded, get rid of the last play and still execute. I believe the guys can, but we’ve got to make sure we see it and keep on repping it.”

Garrett took a team approach when first asked about his goals for the season.

“Get better. Grow as a person, grow as an individual and as a teammate. Grow as a leader and help these guys to come along with me,” he said. “I know that there is always more in the tank for myself but also for them and we have a long way to go, but it’s the start of the process today and all throughout this preseason and training camp and I believe we have a lot of potential that we can help mold and create something very big here.”

He also wants to prove he’s the best in the game. He hasn’t been Defensive Player of the Year — Pittsburgh pass rusher T.J. Watt was last year after 22.5 sacks — but is the betting favorite for 2022.

“Get some more DPOY votes,” he said when asked for personal expectations.