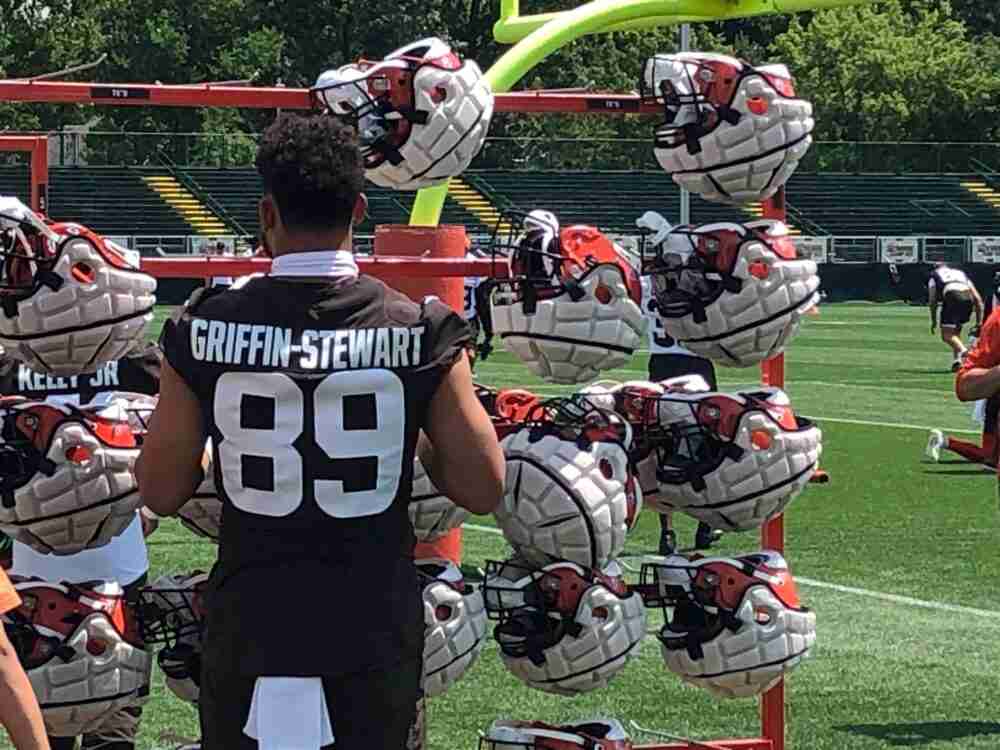 BEREA — Left guard Joel Bitonio is at his ninth training camp in the NFL.

He did something for the first time Thursday.

The offensive linemen, defensive linemen, linebackers and tight ends wore Guardian Caps over their helmets on the second day of practice, as the NFL has instituted a rule requiring those positions to use the outer layer of padding in practice through the second preseason game in August. The change is meant to reduce concussions by decreasing forceful helmet-to-helmet contact.

“I already have a big head, so my head’s going to be even more bobbleheaded out,” Bitonio said before practice.

He didn’t want the self-deprecating joke to minimalize the seriousness of the subject.

“We have all these issues with concussions and you see guys unfortunately later in life. I poked fun at it, but if there’s a way to protect the head when you can, I think it’s a positive movement,” Bitonio said. “I’m not a guy that’s going to like headbang the whole game anyway, I try to use technique and hands and shoulders and different levers instead of your head. I know some guys enjoy that, I guess, but for me I’d rather keep my head out of it as much as possible. Sometimes you have to, it’s football, but it’s another thing you can add to protect the players.

“We’re trying to get player safety and we want guys to live long, happy lives, and if it helps a little bit for wearing a Guardian helmet for a couple weeks, I think it’s worth it.”

Coach Kevin Stefanski talked to the team about the change and pointed out it was agreed upon by the NFL and the NFL Players Association. Players from other positions are allowed to use the Guardian Cap if they choose.

“Anything we can do to make our game safer we’re all about,” he said. “I think the guys are open to it. Like anything, I’m sure there’s going to be getting used to it and those type of things. I think it’ll just become the norm likely in our game.”

This is the third training camp since a new collective bargaining agreement was signed. The changes include a longer ramp-up period for players to acclimate to camp.

The Browns had a walkthrough of less than an hour Wednesday on Day 1, and the session Thursday was brisker and lasted an hour. The offense and defense haven’t gone against each other, and players won’t wear pads until Tuesday.

The short-yardage and goal-line drills will look different with the Guardian Caps, but Stefanski said nothing will change.

“Everything we do we keep the head out of it, whether you’re tackling or blocking or taking on a block, we’re trying to keep our head out of it, that’s good technique,” he said. “Putting these things on doesn’t automatically make you a battering ram of any sort. We’re still being very safe in how we teach, and the guys know that’s how we operate. We don’t use our head in that way.”

Commentary: Browns and their fans left in dark as they wait on Deshaun Watson decision

Safety John Johnson III played all over the field during his time with the Rams and needed awhile to adjust to being stationed primarily in the deep middle of the field with the Browns last year after signing a three-year, $33.75 million deal in free agency. He heads into his second season knowing what to expect.

“Just being a perfectionist playing deep, that’s just me personally,” he said. “Obviously whatever they ask me to do I’m going to do it. Usually if you can limit big plays you’re going to win the game and have a good defense. I think that’s my role, being the air traffic control, not let anything get behind us and playing deep.”

He’s grown comfortable as the last line of defense.

“Oh, yeah, 100 percent,” he said. “We were just watching highlights of last year, not even highlights, teach tape and relearning the systems and I popped on a lot of the clips. I’m like, ‘OK, I’ve got stuff to build on, but I also did some good things last year.’ I’m looking forward to it.”

Center JC Tretter was cut by the Browns in March after five seasons to save cash and salary cap space. He’s smart and reliable, not missing miss a snap during his tenure in Cleveland except for a game he missed with COVID-19.

He’s still a free agent, and Bitonio, a close friend, was asked if he thinks Tretter will have a team soon.

“I don’t know. I think he should,” Bitonio said. “I think if you look at the stats, whatever stats you want to look at, if you want to watch the film or whatever, he’s, in my opinion, one of the top five or, if you want to even argue, top 10 centers in the league. But the NFL’s weird like that sometimes, so we’ll see what happens.”

The Buccaneers might be in the market for a center after Ryan Jensen suffered what’s believed to be a serious knee injury Thursday. Tretter is 31 years old and president of the NFLPA.

Chief of staff and assistant receivers coach Callie Brownson is missing the start of camp to serve as head coach of the women’s national team in the upcoming world championships.

“We told her she is not allowed to come back without a gold medal,” Stefanski said. “She is ready. She is going to do a great job. We are excited for her.

“She was able to be here for our team meeting on Tuesday night, so we kind of wished her well. Excited to hopefully get to watch some of that. It will be streaming. We are looking forward to her doing her thing and coming back with a gold medal.”

Stefanski’s plan to get the team ready for the season runs on parallel tracks.

“We have thought long and hard about how to plan this training camp so it is maximizing our ability to get this football team ready and minimizing any risk of injury,” he said.

** Bell didn’t practice or run routes but caught passes from a staff member.