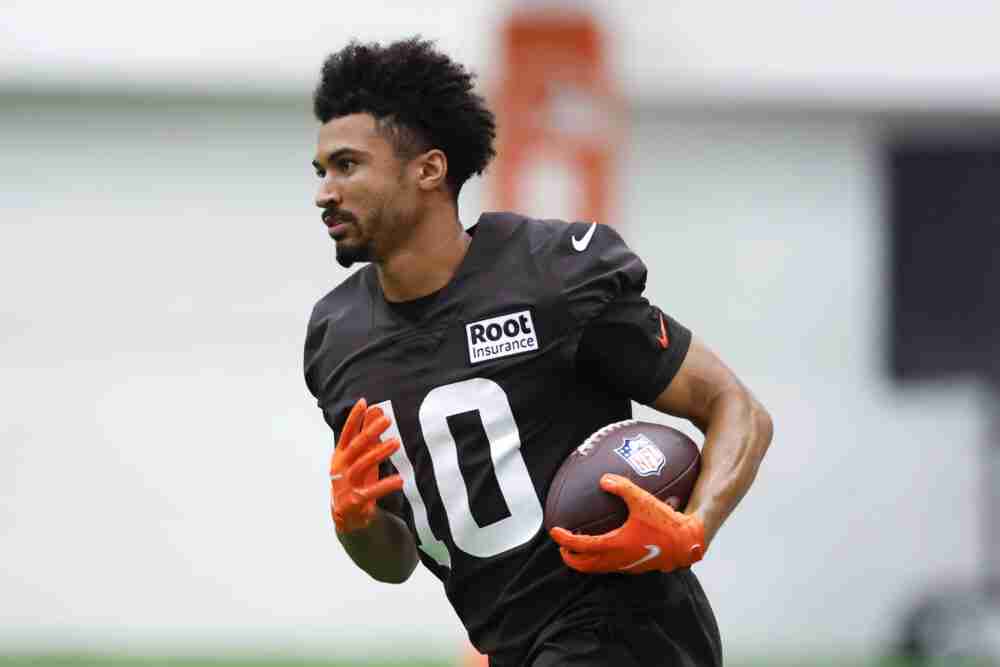 Coach Kevin Stefanski said Schwartz is “day-to-day” with a knee strain and will be ready for the season.

“We’ll see how that goes over the next couple days, but think he’ll be OK certainly long term,” Stefanski said Friday before practice.

The Browns got a scare Thursday when Schwartz pulled up while running a route on air. He was checked by the athletic training staff, walked off the field, didn’t return and was further evaluated.

The “day-to-day” designation was a relief.

Schwartz was on the field for the morning walkthrough Friday but not for the afternoon practice.

A third-round pick in 2021, Schwartz is expected to compete with rookie third-round pick David Bell for playing time as the No. 3 receiver behind Amari Cooper and Donovan Peoples-Jones. Bell started camp on the physically unable to perform list with a foot injury and has yet to practice.

Despite temporarily being down two of the projected top four receivers, Stefanski said adding one isn’t necessary at this stage.

“I would say too early for that,” he said.

Schwartz has world-class speed but is still developing as a football player. He had 10 catches for 135 yards and a touchdown in 14 games as a rookie. He missed time during the offseason and training camp with a hamstring injury, then was sidelined for three games with a concussion.

With Schwartz and Bell sidelined, rookie sixth-rounder Michael Woods II and undrafted rookies Isaiah Weston, Mike Harley Jr. and Travell Harris are getting extra reps. Woods missed much of the offseason program with an injury.

“It is good to see him out there finally,” Stefanski said. “We got to see him late in the offseason program, so he is somebody who I am excited to see what he has over the course of these next few weeks.

“I think that all of the young guys are learning a lot. They are working very hard.”

Pro Bowl kick returner Jakeem Grant Sr., who was signed in free agency, is a veteran and trying to carve out a role on offense. He has 100 catches in six seasons, got time with the first-team offense Friday and caught a couple of balls from Deshaun Watson.

“He is an electric player,” Stefanski said of Grant. “He is fast. Certainly somebody who we would love to use as we get into the regular season.”

Peoples-Jones had reason to celebrate when the Browns traded for Cooper in March. Not only is Cooper a four-time Pro Bowler, Peoples-Jones idolized him when he was younger.

“I was excited,” Peoples-Jones said. “Growing up, he was one of my favorite players, was actually the reason I wore No. 9 in high school and in college. So it’s dope.

“He was just one of the best.”

Peoples-Jones is closely watching what Cooper does in meetings and on the field. Peoples-Jones, 23, has 48 catches and five touchdowns in his first two years, while Cooper, 28, has 517 catches and 46 in seven seasons with the Raiders and Cowboys.

“I’m definitely learning from him, he has a lot of experience, very smart guy,” Peoples-Jones said of Cooper. “To see his success, he’s Amari Cooper, there’s always things to learn from him.”

Defensive coordinator Joe Woods has started an “Alpha Dawg” challenge in which four teams are judged on how they attack the ball and force turnovers in practice. It’s motivation during what can be a long, monotonous camp.

“There’s a prize, for sure,” he said. “Coach Woods hasn’t gone over it with us with us yet, but there’s a prize for sure. We have four teams and I think my team is going to win.

No. 1 nickelback Troy Hill was traded during the draft, leaving a hole in the slot.

Starter Greg Newsome II has taken over, moving from outside to the inside against three-receiver sets, but the depth chart behind him is murky. Woods said seven guys are working at nickelback, and many of them didn’t play inside in college.

“We always try to train everybody that has that type of skill set to play the nickel position,” he said. “We’ll see how it all sorts out.”

A.J. Green is part of that group. He’s established himself as a solid backup after being undrafted in 2021 and had an interception Friday.

“He’s proven himself,” Woods said. “Last year he stepped up, he had some premium matchups against some of the better receivers in this league and did a nice job.

“For him this year, he’s part of the equation. And that excites me because I know there’s more things I can do.”

The Browns claimed safety Jovante Moffatt off waivers from the Jets. Moffatt (5-foot-11, 213 pounds) spent the past two seasons with the Browns, including time on the practice squad, after signing as an undrafted free agent in 2020. He’s played in 14 games with 10 tackles.

The roster stands at the 90-man maximum.

** The annual First and Ten Blood Drive will be Saturday at 12 sites across Northeast Ohio, including FirstEnergy Stadium.