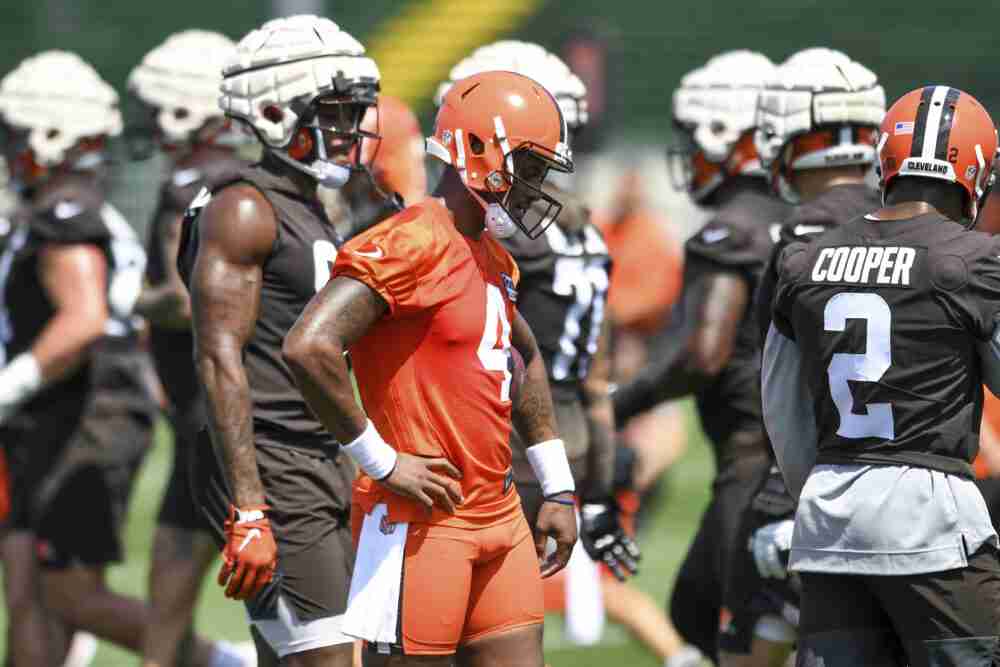 FIRST THINGS FIRST: After two light days with the offense and defense working separately, the Browns held competitive seven-on-seven periods and 11-on-11 installations. Quarterback Deshaun Watson took all the snaps with the first-team offense, and Jacoby Brissett followed with the second team. Watson’s first pass in seven-on-sevens was to receiver Donovan Peoples-Jones in the flat. He also connected with Amari Cooper and Demetric Felton. In the red zone, Watson threw short touchdowns to tight end David Njoku and running back Nick Chubb.

NEWS OF THE DAY: The biggest news was the lack of news regarding a potential suspension for Watson. For a long time, resolution was expected before camp, but the uncertainty will stretch at least into next week, the first full week of camp.

“With all of that, you control the controllables,” said coach Kevin Stefanski, who was later asked if he’d be handling the repetitions any differently if he knew the decision of independent arbitrator Sue L. Robinson. “Of whatever the decision is, details of potential length of absence would matter the most to us in terms of how we are putting our plan together.”

CAMPER OF THE DAY: Cornerback A.J. Green made the first highlight play of camp and also worked in with the first-team defense. He undercut a seam route by fullback Johnny Stanton IV and made a nice grab of a Brissett throw, then kept his balance and returned it. With starter Denzel Ward out with a foot injury, Green and rookie Martin Emerson Jr. split time as the No. 3 corner behind Greg Newsome II and Greedy Williams.

A.J Green coming up with the play for the defense with the INT. pic.twitter.com/7hlOxpFEP4

PLAY OF THE DAY: Miller Forristall, who’s competing to be the third tight end, caught a touchdown from Brissett in a red zone drill, snatching the ball in traffic as he ran across the back of the end zone.

QUOTE OF THE DAY: “I am not real big on vibes.” — Stefanski.

“The vibe is kind of different, man,” he said. “It’s more of a swag. I don’t know what it is, but we feel like the confidence is there.”

SATURDAY’S SCHEDULE: Practice starts at 2 p.m. and is open to the public for the first time.

“The players love playing in front of the fans. We are excited to have them,” Stefanski said. “I am looking forward to that energy that it brings because it does ramp up the energy that the players then have.”