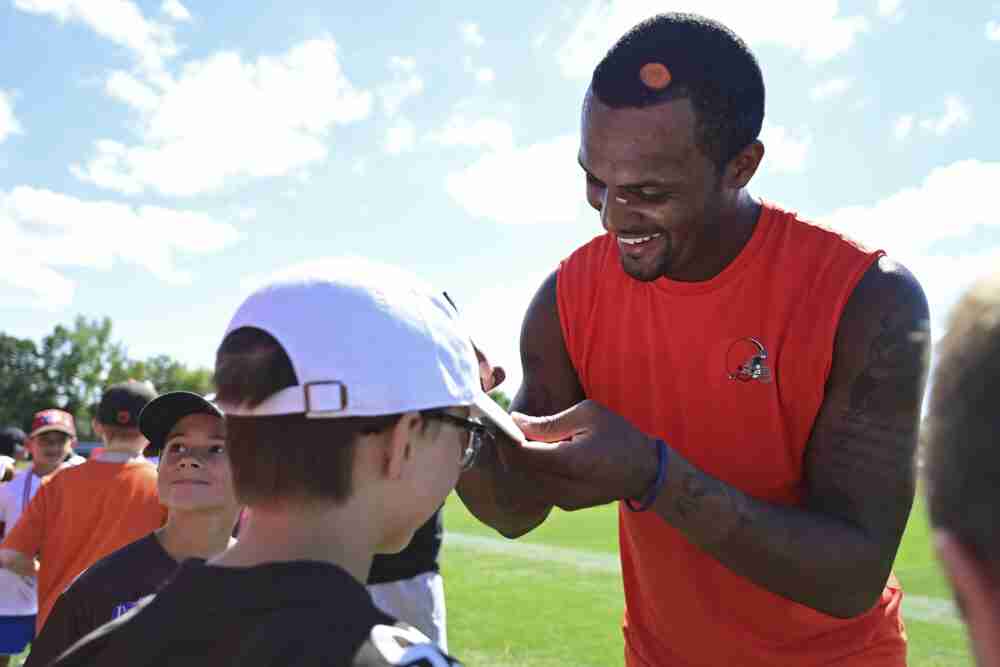 BEREA — Deshaun Watson’s first appearance in front of a crowd of Browns fans started with subdued cheers and a wave.

It ended with him spending a lot of time with them. He signed dozens of autographs, posed for pictures, played rock paper scissors with one kid and even gave away his cleats after signing them.


The controversial quarterback ran onto the field on a beautiful Saturday afternoon for the first training camp practice open to the public. It took a few seconds for anyone to notice, then some fans cheered and at least one yelled “Let’s go!”

Watson waved to the crowd, jogged to the end of the field, then back and began warming up.

About a minute later, All-Pro defensive end Myles Garrett, who’s starting his sixth season with the Browns, was greeted with much louder cheers and chants of his name.

The Browns acquired Watson on March 18 in a blockbuster trade with the Houston Texans. He’s awaiting a decision from independent arbitrator Sue L. Robinson on whether he violated the NFL’s personal conduct policy and the length of a potential suspension after being accused by more than two dozen women of sexual misconduct during massage therapy sessions.

There’s no definitive timetable for a ruling, but it could come next week.

Commentary: Browns and their fans left in dark as they wait on Deshaun Watson decision

Watson has denied any wrongdoing, saying he never assaulted, harassed or disrespected any woman. Two Texas grand juries declined to indict him on criminal charges. He settled 20 of 24 civil lawsuits — terms weren’t released — with the other four expected to go to trial beginning in March.

The trade for Watson received a wide range of reaction from Browns fans, including some saying they’d stop rooting for their favorite team due to the serious allegations. The Browns said they did thorough research and got “comfortable” with Watson as a person, and they haven’t deviated from that position. They signed him to a fully guaranteed five-year, $230 million contract.

He’s a three-time Pro Bowler who led the NFL with 4,823 passing yards in 2020, the last year he played. He took all the first-team repetitions in practice Friday, but veteran backup Jacoby Brissett worked in with the starters Saturday for a handful of reps. Coach Kevin Stefanski is waiting for resolution on the expected suspension before giving more starter reps to Brissett.

When Watson is available to play, he’s expected to lift the offense to another level.

“I’m excited,” tight end David Njoku said. “I can’t wait. I can’t wait for us to get to whichever week we see him. Hopefully sooner than later.”

Camp opened Wednesday with the cloud of uncertainty, but Stefanski and the players insist it’s not weighing on them.

“We just have to take each day as it is, whoever we have, we have to put our best foot forward and keep working,” Njoku said.

The practice Saturday was the first of 11 open to the fans. The bleachers on both sides of the field were just about full, as Stefanski and many of the players experienced a crowded camp practice for the first time. Fans weren’t allowed in 2019 due to the pandemic, and attendance was limited a year ago.

Watson later received a “Welcome to Cleveland” and “Way to go, Watson” after a nice throw on an out. During an 11-on-11 drill, he displayed his ability to throw while moving left, hitting receiver Donovan Peoples-Jones then tight end Harrison Bryant down the sideline. He also showed off his arm strength on a dart over the middle to receiver Jakeem Grant Sr.

The next highlight was the quality time with the fans.

He wasn’t alone. Running back D’Ernest Johnson was swallowed by a mob of fans on one side of the fields, and right guard Wyatt Teller, safety Grant Delpit, cornerback Greg Newsome II and rookie defensive tackle Perrion Winfrey, among others, worked the other side.

“We’re going to have some fun, man. Meet some kids and make some kids’ day. I remember going to Saints training camp when I was young. That was the coolest thing ever, man,” Delpit said before practice. “So we’re going to try to make some people’s day out here.”