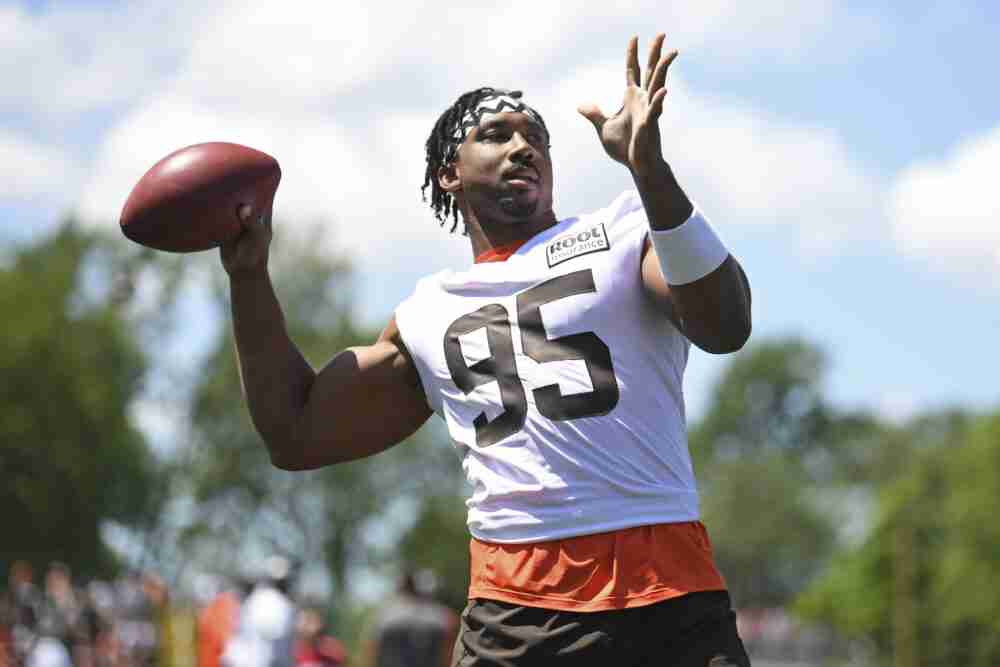 BEREA — Chris Kiffin is in his third season coaching defensive end Myles Garrett. Kiffin has never seen his superstar quite like this.

“I know it’s (early in) camp, he’s been locked in more so than I’ve ever seen,” Kiffin, the defensive line coach, said Saturday before practice. “He’s out early to everything, he’s really taken the next step, as far as in our defensive line room being the leader. Obviously he does that for the team. But he knows that room is his now — he had some older guys when he first got in there — and he’s really locked in right now.

“Obviously the talent continues to keep getting better year to year.”


Garrett said Wednesday one of his personal goals for his sixth season is to “get some more DPOY votes.” Despite being a first-team All-Pro the last two years and totaling 28 sacks, he’s never received a vote for Defensive Player of the Year. He’s always wanted to win the award and is the betting favorite this season.

“I absolutely see that in his future,” Kiffin said. “I think he does, too.

“His time will come, and hopefully it’s this year.”

Kiffin was surprised Garrett hasn’t received any DPOY votes and didn’t have an explanation.

“I can’t speak on that. I would vote for him if I had a vote. I love coaching the guy,” Kiffin said. “I mean, why wouldn’t he get votes? He does everything we ask him to do. He plays the run, he’s all over the field, he hardly comes off the field, he impacts the game a number of different ways, he’s unblockable, has been as advertised, he’s gone through three guys before. So, yeah, I’ll vote for him.”

Garrett will be joined for the second straight season by Jadeveon Clowney at the other end. After waiting a good chunk of the offseason, Clowney re-signed on a one-year, $10 million contract.

“Obviously he’ll get a little tired here when we start getting into the dog days of camp, make sure he has that same energy. But the guys are happy to have him back, he’s happy to be back and we expect the same results as last year, if not better.”

The Browns acquired Chase Winovich from the Patriots in March in a trade for linebacker Mack Wilson. Winovich played outside linebacker in New England and will shift to defensive end, competing with rookies Alex Wright and Isaiah Thomas and veterans Stephen Weatherly and Isaac Rochell for playing time behind Garrett and Clowney.

“He’s learning the techniques, he’s learning how to line up and things like that,” Kiffin said. “We’ve got to see when we put the pads on and get going if he’s a scheme fit and how he falls into line.”

BETTER BY THE DAY

When starting tight end Austin Hooper was cut in March, David Njoku moved into the No. 1 role and Harrison Bryant became No. 2. Bryant, a fourth-round pick in 2020, has 45 catches for 471 yards and six touchdowns in 31 games.

“Oh, my god, night and day,” Njoku said of Bryant’s improvement. “Even when he came here as a rookie, he was very, very good. Each day, the route-running, the catching, the blocking, everything, as an overall tight end, he’s improving every day.”

New tight ends coach T.C. McCartney said Bryant’s production through two years isn’t what anyone wanted but his performance has been solid.

“He does a lot of things that don’t show up on the stat sheet necessarily, but we expect him to take the next step, as well,” McCartney said.

Defensive tackle Tommy Togiai, a fourth-round pick out of Ohio State in 2021, had a quiet rookie season, totaling 16 tackles, a half-sack and a pass defensed in six games. He’s slotted to back up starters Jordan Elliott and Taven Bryan.

“Right now, he’s a rotational guy for our two-deep on the depth chart,” Kiffin said. “I was pleased with Tommy’s rookie year. When his number was called, he was always around the ball making plays. He does everything right in our scheme. He’s got to take the next step like all these guys do.

“He’s a very, very strong individual. That gives you a chance to keep blockers off you, locate the ball, get off of guys like he does and get to the ball.”

Receiver Isaiah Weston (6-foot-4, 214 pounds) was carted off the field with a knee injury. He’s an undrafted rookie from Northern Iowa.

The Browns finished practice down four receivers. Rookie third-rounder David Bell (foot) remains on the physically unable to perform list, Javon Wims is out with an illness and Anthony Schwartz strained his left knee Thursday. Schwartz wasn’t on the field for the second straight practice.

** Weatherly (knee) missed his first practice and wasn’t on the field.

Former left tackle Joe Thomas was at practice and received big cheers from the crowd.

** Clowney made it through the line and rejected a pass from Watson.

** Garrett “sacked” Jacoby Brissett in one of his reps with the first-team offense.

** The Puppy Pound is back for an eighth season, and 10 puppies were adopted.