Decision in Deshaun Watson case due this morning, per source 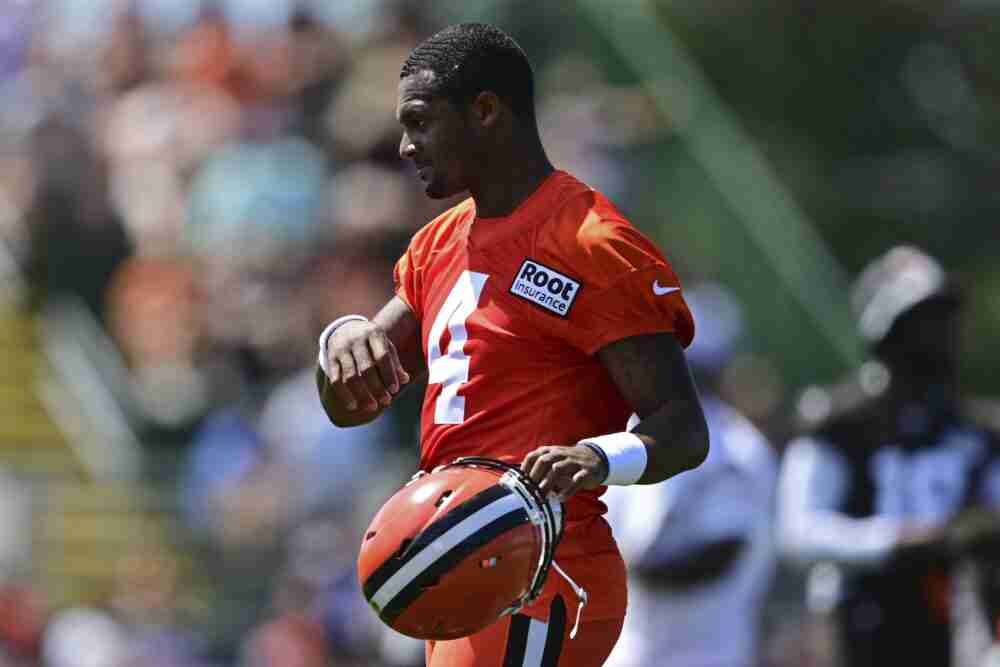 The decision the Browns have been waiting for is coming Monday morning.

Independent arbitrator Sue L. Robinson said she’ll render her ruling in the case of quarterback Deshaun Watson, a league source confirmed to The Chronicle-Telegram on Sunday night. It will reportedly come by 9 a.m.

Robinson was charged with determining if Watson violated the NFL’s personal conduct policy and, if so, the punishment.


Watson, 26, was accused by more than two dozen woman of sexual misconduct, including assault and harassment, during massage therapy appointments. He’s denied any wrongdoing, saying he’s never assaulted, harassed or disrespected any woman.

Two Texas grand juries declined to indict him on criminal charges. He settled 20 of 24 civil lawsuits in June with terms undisclosed, and plaintiffs attorney Tony Buzbee announced Monday morning settlement agreements had been reached in three of the four remaining lawsuits.

“After lengthy and intense negotiations, I can confirm that, late last night, our team resolved three of the four remaining civil cases with Deshaun Watson,” Buzbee said in a statement. “We will continue to discuss the remaining case with Watson’s legal team, as appropriate.

“This case started because one woman had the fortitude to step forward and make her voice heard. Her courage inspired many others with the same experience. None of this saga would have occurred without that one brave voice. One person can make a difference.”

A suspension and fine are expected, but the major question for Watson, the Browns and their fans is the length of the potential suspension. The league has pushed for a season-long suspension, while Watson’s attorneys and the players union have argued for no games.

Either side can appeal the ruling as long as Robinson decides Watson violated the personal conduct policy. The league can’t appeal if she doesn’t hand down a punishment.

Commissioner Roger Goodell or someone he designates would handle the appeal. The original punishment could be reduced, maintained or increased, and the decision would be final, as agreed to in the collective bargaining agreement.

Watson and the NFL Players Association released a statement Sunday night saying they wouldn’t appeal and urging the NFL to abide by Robinson’s decision.

“In advance of Judge Robinson’s decision, we wanted to reiterate the facts of this proceeding,” the statement read. “First, we have fully cooperated with every NFL inquiry and provided the NFL with the most comprehensive set of information for any personal conduct policy investigation. A former Federal Judge — appointed jointly by the NFLPA and NFL — held a full and fair hearing, has read thousands of pages of investigative documents and reviewed arguments from both sides impartially. Every player, owner, business partner and stakeholder deserves to know that our process is legitimate and will not be tarnished based on the whims of the League office. This is why, regardless of her decision, Deshaun and the NFLPA will stand by her ruling and we call on the NFL to do the same.”

This is the first case for Robinson since she was jointly appointed by the NFL and NFLPA in 2020.

The NFL investigated Watson for about 15 months before presenting its case to Robinson during a three-day hearing in late June. She received briefs from both sides by July 12.

A settlement was always a possibility, but the league and Watson’s side couldn’t agree on a punishment.

The assumption was the ruling from Robinson would come before the Browns started training camp, but she wasn’t beholden to the NFL calendar. Watson has been practicing for more than a week after quarterbacks and rookies reported early. The first full-squad practice was Wednesday, and the fifth practice is Monday afternoon after the players were off Sunday.

The Browns acquired Watson on March 18 in a blockbuster trade with the Houston Texans. Cleveland sent a net of five draft picks, including three first-rounders, to Houston and signed Watson to a fully guaranteed five-year, $230 million contract. It’s the most guaranteed money in NFL history.

He practiced in front of Browns fans for the first time Saturday. He was cheered when he ran on the field and signed autographs and posed for pictures with fans after practice.

Watson made the Pro Bowl in 2018, ’19 and ’20 and led the league in passing yards with 4,823 in 2020. He didn’t play last season after demanding a trade and then facing the sexual harassment and assault allegations.

Coach Kevin Stefanski has given Watson the vast majority of repetitions with the first-team offense during the offseason program and to start training camp but said he’d adjust depending on the potential suspension. Veteran Jacoby Brissett would replace Watson.

“I think the details would be important,” Stefanski said Friday. “Of whatever the decision is, details of potential length of absence would matter the most to us in terms of how we are putting our plan together.”