Deshaun Watson suspended for six games; NFL undecided if it will appeal 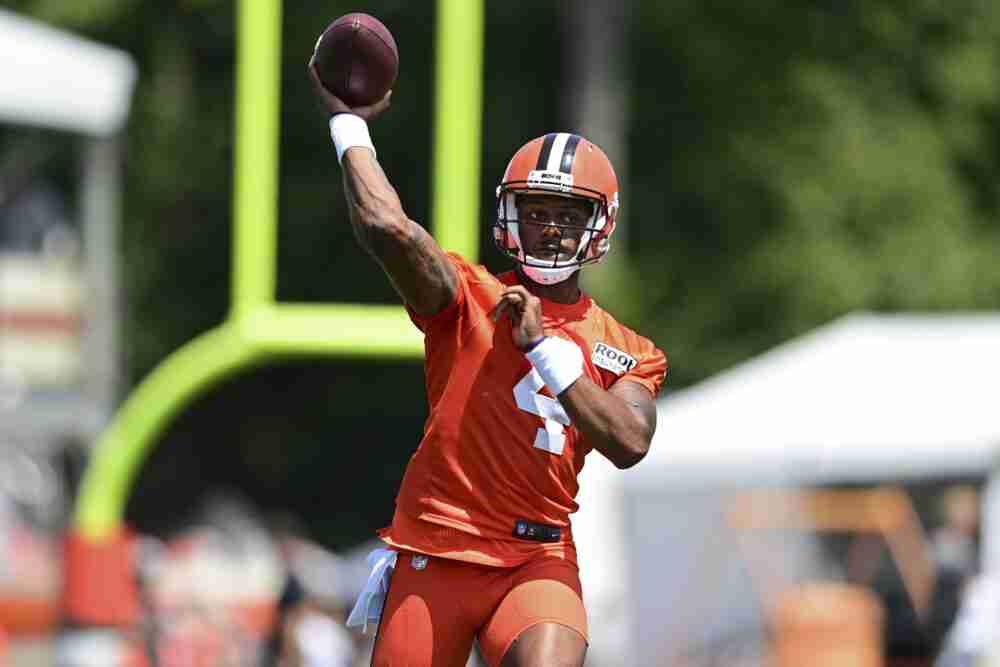 BEREA — Deshaun Watson’s regular-season debut with the Browns has been delayed, but not for as long as many expected.

The news could’ve been much worse for the controversial quarterback, the Browns and their fans.

Analysis: Waiting to see if NFL appeals and other quick thoughts on Deshaun Watson’s six-game suspension


The NFL has three days to appeal and hasn’t decided if it will. An appeal would likely result in a longer suspension, as Commissioner Roger Goodell or someone he designates would make the decision.

“In light of her findings, the league is reviewing Judge Robinson’s imposition of a six-game suspension and will make a determination on next steps,” the league said in a statement.

Watson was accused by more than two dozen women of sexual misconduct, including assault, during massage therapy sessions. He settled 20 of the 24 civil lawsuits in June, with the terms of the agreements confidential. Plaintiffs attorney Tony Buzbee announced Monday morning settlement agreements had been reached in three of the four remaining lawsuits.

The Houston Texans, Watson’s former team, settled 30 civil lawsuits July 15 after being accused of knowing about and enabling Watson’s behavior.

Two Texas grand juries declined to indict on criminal charges, and Watson has denied all wrongdoing. He didn’t talk Monday.

Robinson’s decision said Watson’s pattern of “non-violent sexual conduct” was “more egregious” than any previously reviewed by the league and referred to sexual assault — by the league’s definition — against four people as unprecedented. The league interviewed 12 of the 24 women who filed civil lawsuits and relied on the testimony of four, along with interviews with 37 other people and “substantial documentary evidence.”

Robinson referred to Watson’s habits before and during massage therapy sessions as “predatory conduct,” writing that he had a “sexual purpose” in making the arrangements and “knew such sexualized contact was unwanted.”

The punishment doesn’t include an additional fine but stipulates he must use only club-approved massage therapists for the duration of his career and have “no adverse involvement” with law enforcement or commit any further violations of the personal conduct policy.

“We will make sure that everything that is agreed upon is followed,” coach Kevin Stefanski, the only member of the organization to speak to reporters, said of the massage stipulation.

In Robinson’s conclusion, she criticized the NFL for being a “forward-facing” organization but not necessarily a “forward-looking one.” She said the league tried to impose a “more dramatic shift” in culture with the case against Watson without fair notice and “consistency of consequence.”

After looking at “relevant precedent” and considering how her decision might be used in the future, Robinson found “the most appropriate landing place” to be six games.

She ruled Watson violated three provisions of the conduct policy — sexual assault as defined by the NFL, posing a genuine danger to the safety and well-being of another and undermining or putting at risk the integrity of the league.

If the suspension stands, Watson would be eligible to return Oct. 23 against the Ravens in Baltimore. His first home game would be Oct. 31 against the Bengals.

“We respect Judge Robinson’s decision, and at the same time, empathize and understand that there have been many individuals triggered throughout this process,” Browns owners Dee and Jimmy Haslam said in a statement. “We know Deshaun is remorseful that this situation has caused much heartache to many and he will continue the work needed to show who he is on and off the field, and we will continue to support him.”

The Browns had been waiting to learn Watson’s fate since acquiring him March 18 in a blockbuster trade that upset many in the fan base.

The league investigated the accusations and handed the findings to Robinson in a 215-page investigative report. She presided over a three-day hearing at the end of June and had attorneys for the NFL and Watson submit briefs by July 12 before making her ruling. She’s a former federal judge and was jointly appointed by the league and the NFL Players Association.

Watson and the NFLPA announced Sunday night they wouldn’t appeal and urged the NFL to abide by Robinson’s ruling.

An appeal would be heard by Goodell or a designee, with the power to shorten, lengthen or maintain the punishment. The league argued to Robinson that Watson’s suspension should be indefinite and last at least all of the 2022 season.

The news of the six-game suspension is a blow but far from a lethal one to the Browns’ hopes this season.

With Watson, they’re a Super Bowl contender. Without him, they will likely rely on a strong running game and potentially dominant defense to keep them in playoff contention until his return.

He’s allowed to keep practicing and play in preseason games until the suspension begins Week 1.

The first four games appear to be the softest part of the schedule, with games at Carolina, home vs. the Jets and Steelers and at Atlanta.

Journeyman Jacoby Brissett, who’s 14-23 as a starter, will replace Watson. Brissett, 29, has started games with the Patriots, Colts and Dolphins.

Watson signed a fully guaranteed five-year, $230 million contract with the Browns and agreed to waive his no-trade clause with the Texans. Watson faced 22 civil lawsuits when the Browns acquired him and gave him the NFL record for guaranteed money.

The serious and disturbing allegations against Watson didn’t stop the Browns from sending a net of five draft picks, including three first-rounders, to the Texans in the trade. The accusations grew in recent months and included that he masturbated during a massage therapy session.

Watson reiterated June 14 during minicamp that he never “assaulted,” “harassed” or “disrespected” a woman.

“I never forced anyone to do anything,” he said.

The Browns chose Watson over incumbent Baker Mayfield because they believed they needed a significant upgrade at the game’s most important position to contend for a Super Bowl in the loaded AFC that includes a laundry list of top quarterbacks — Kansas City’s Patrick Mahomes, Buffalo’s Josh Allen, the Chargers’ Justin Herbert, Cincinnati’s Joe Burrow, Baltimore’s Lamar Jackson and Denver’s Russell Wilson.

Watson made the Pro Bowl in 2018, ’19 and ’20 and led the league in passing yards with 4,823 in 2020. He didn’t play last season after demanding a trade and then facing the sexual harassment and assault allegations.

Mayfield was traded to the Panthers on July 6 in exchange for a fifth-round draft pick in 2024 that could turn into a fourth-rounder if he plays 70 percent of the snaps this season. The Browns agreed to pay $10.5 million of Mayfield’s contract.

The Browns researched Watson over months, got “comfortable” with him as a person over time and pursued him after the first grand jury didn’t return an indictment.