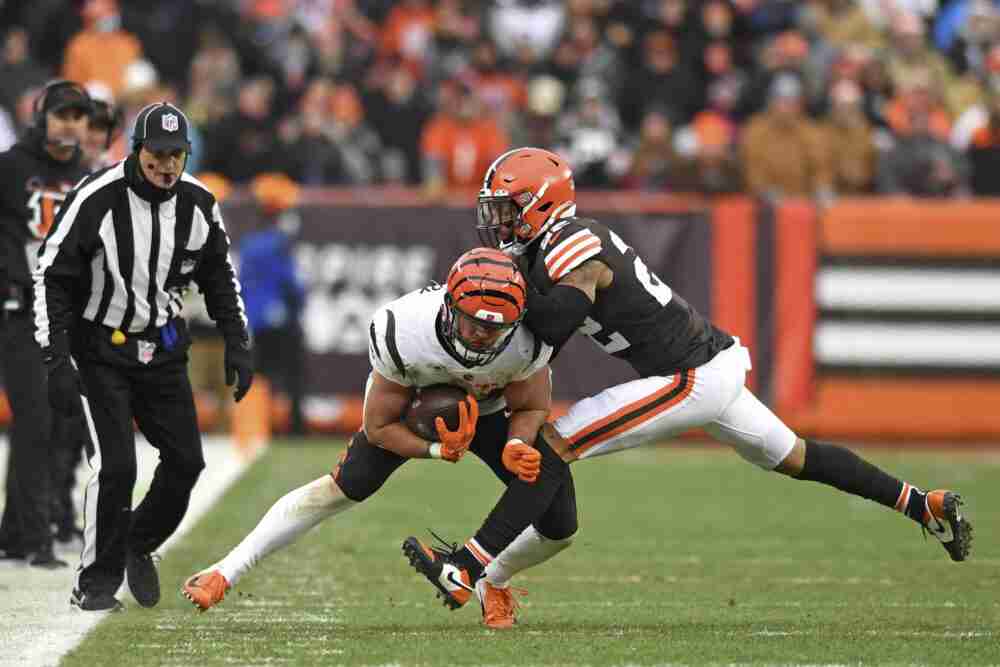 BEREA — Grant Delpit has played only 15 games with the Browns, but that has not stopped the third-year safety from drawing high praise and bold predictions from teammates early in training camp.

Delpit appreciates the support of his teammates and coaches, but to live up to the hype, he knows there is much work to do during training camp to prepare for the season and develop into a leader in the secondary.

“It feels great to get high praise from my teammates,” Delpit said prior to Saturday’s practice. “I’ve got nothing but high praise for them, too. I like to sit back and work and do me. I like to let my play do the talking, so anybody doubting us or … we don’t really worry about that, man. We worry about what we’re doing on the field and we’re very excited for the season.”

Two years ago, Delpit was expected to play a prominent role after being the No. 44 pick out of LSU in the second round. But a torn right Achilles tendon suffered early in training camp brought an end to his rookie season before it truly got started.


After spending part of the 2021 season adjusting to the speed of the NFL, Delpit (6-foot-3, 208 pounds) made an impact in several ways, as he registered 66 total tackles, including 43 solo stops and three for loss, as well as one sack, one interception, three passes defended and one forced fumble.

Watching the diverse production Delpit had last season has his teammates thinking the sky is the limit.

“I mean, he could be one of the best, like period,” fellow safety John Johnson III said. “In the game that we’ve got today, our safeties, we don’t really get mentioned in those top-tier safeties, so I think this is an opportunity for us.

“I think he’s like a mixture of myself and Ronnie (Harrison Jr.). I feel like he can do pretty much everything, and he has done it. Even if you go back to his LSU days, he pretty much did everything for them, can take the ball away. He’s explosive, he’s a good leader, I think people sleep on that. He works hard, does everything right, so I think he’s just like the glue to the safety room and, honestly, to the DB room.”

Coach Kevin Stefanski expressed similar sentiments about Delpit’s development as a leader, which starts not by helping to motivate teammates, but by learning his responsibilities and doing his best to accomplish them.

“I think with Grant, going back to the offseason program, he just did a really nice job in understanding what we are doing and was efficient in his movement,” Stefanski said. “I think any leadership probably comes from him being more comfortable out there on the grass.

“This is, in a lot of ways, Year 2 for Grant. I think he is just getting more comfortable. Then, (with) natural leaders, that starts to come out of them when they can process information quickly, can react quickly and are doing their job. That is when the leadership thing starts to show up.”

Defensive coordinator Joe Woods added: “I remember just tracking him through the whole season, you could see him get better and you could see the confidence. I think with him, he really sees the field well. You don’t see him really ever waste steps, and I think the instincts play a big part of it for him. Then you have the size and length and the ability he has. He got better last year, and we look for him to have a good year for us this year, as well.”

Soft-spoken when addressing the media, Delpit believes strongly in leadership by example, and nowhere is that more evident than in on-field interactions with his teammates.

Having won a national championship at LSU, Delpit knows the importance of communication on the field, and does what he can to make sure everyone is in the proper spots and understands their assignments once the ball is snapped.

“I like to keep a smile on my face, keep the energy up in the building, be friends with everybody, make sure I know what’s going on,” Delpit said. “If they got any problems on or off the field, just making sure everybody’s on the same page. I try to be that guy in the locker room that’s always in a good, positive mood.

“Knowing what guys can do, knowing their athletic ability, their weaknesses, their strengths — it’s good to have a close circle in the locker room also. Having fun so that when you get on the field, we’re just having fun. It’s not like it’s something that’s completely different. We’re all just having fun and doing our job at the same time.”

Delpit made his NFL debut in Week 2 last season and made an immediate impact.

He registered one sack, six tackles and a forced fumble in a 31-21 victory over the Houston Texans, and did so despite coaches not wanting to overload him and limiting his participation to less than half of the defensive snaps.

Gradually, Delpit’s workload increased, and over the final four games he was on the field for nearly every one of the defensive snaps.

“Just knowing what’s going to happen before it happens,” Delpit said of the evolution of making impact plays. “Your first year, you might be kind of hesitant, scared to make a mistake, stuff like that, but trust in your process, trust in what you learn throughout the week and making that play on the field fast, with no hesitation.

“I won’t say I was afraid to make a mistake. That’s always in the back of your mind like, ‘Ah, let me make sure I’m doing the right thing, not messing up,’ but like I said, reps and games and getting experience under your belt, it naturally goes with it.”

Now that Delpit feels he has a better understanding of the NFL game, he is focused on consistently making impact plays.

Those difference-making plays include forcing more turnovers, as the Browns tied for 15th in the NFL in interceptions (13) and tied for 26th with only six fumble recoveries during the 2021 season.

“I have high goals for myself,” Delpit said. “We didn’t get enough takeaways last year, so we definitely need to improve that. Yeah, man, opportunities come to you, you make the play.

“That’s a big difference. We’re talking about like a Pro Bowl difference and an All-Pro. You start making plays like that, you’re not just an average guy. You see all the great players, great safeties, they’re always very reactive, and they know what’s going on before it happens, so I try to watch guys like that to improve my game, and I might experience it myself.”

David Njoku ready to show how much he’s grown as a complete tight end
Jacoby Brissett ready for starting role, grateful for trust of organization