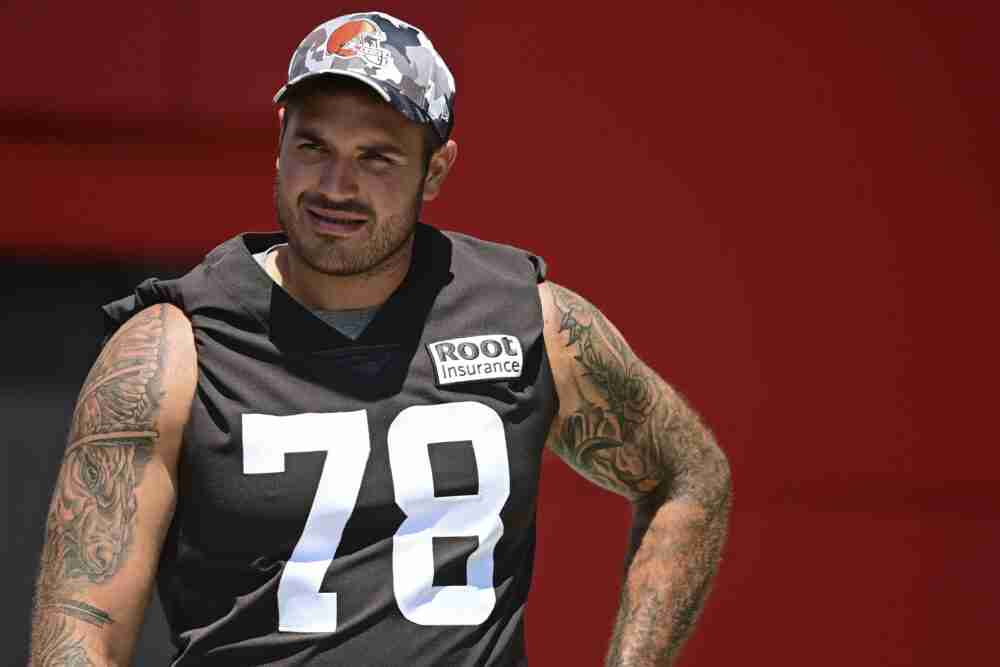 BEREA — Not only is right tackle Jack Conklin on schedule to be ready for the start of the regular season, he was on the practice field Monday.

The Browns activated the two-time All-Pro from the physically unable to perform list and he participated in individual drills. He sat out team drills as expected.

Conklin, 27, suffered a torn patellar tendon Nov. 28 in a loss at Baltimore. He had surgery and spent the offseason rehabbing at Browns headquarters.

“I thought it was awesome to see No. 78 walking out here in his pads,” coach Kevin Stefanski said. “I told you guys — he’s worked so hard. I’m really proud of how hard he’s worked.


“I was here in late June and I looked out and he’s on the field with a bunch of offensive linemen putting them through drills. That just doesn’t happen very often in late June in given cities. It’s still a process. He’s not all the way back. We have time to work him back up to speed.”

Chris Hubbard has mostly filled in for Conklin with the starting offense, with James Hudson III getting a few reps Monday.

Hubbard missed the final 16 games last season after his triceps tore in the opener. He’s expected to be the top tackle off the bench this season and took some reps at left tackle with the second team Monday.

No. 1 receiver Amari Cooper was checked by trainers after appearing to tweak an ankle. The ankle wasn’t wrapped by the athletic training staff and he stayed on the field.

Schwartz, who was injured Thursday, worked on the side after not being on the field for practice Friday and Saturday.

** Punter Corey Bojorquez didn’t practice and wasn’t on the field. The left-footer is dealing with a right foot injury. He’s competing with Joseph Charlton for the job.

Undrafted rookie receiver Isaiah Weston was waived with an injury designation. He was carted off the field Saturday with a knee injury.

With the loss of Weston and the absences of Schwartz, Bell and Wims, the Browns signed receiver Derrick Dillon.

Dillon (5-foot-11, 175 pounds) was undrafted out of LSU in 2020 and spent two seasons on the Giants’ practice squad. He most recently played with Tampa Bay in the USFL, catching 28 passes for 386 yards and four touchdowns.

The players will practice in pads for the first time Tuesday.

** Fourth quarterback Josh Rosen has yet to take a snap in team drills.

** With Ward sidelined, rookie third-round pick Martin Emerson Jr. and A.J. Green have gotten reps as the No. 3 cornerback behind Greg Newsome II and Greedy Williams.