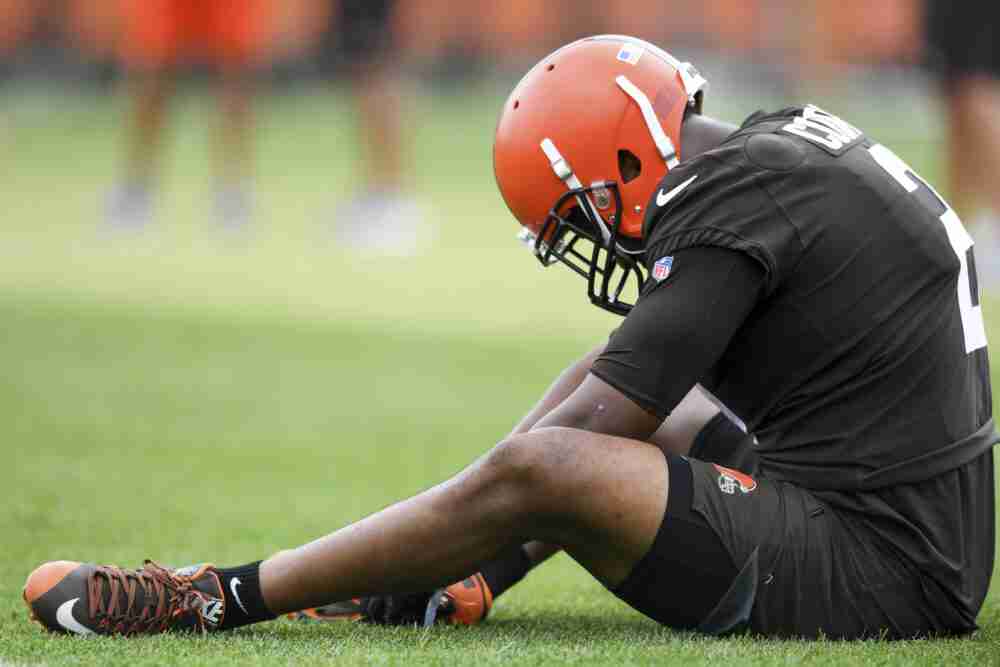 BEREA — The Browns practiced Tuesday without the Nos. 1, 3 and 4 receivers on their depth chart.

“Amari will be out today but he’ll be back pretty soon,” Stefanski said before practice. “He’ll be OK.”

Cooper was checked by trainers late during practice Monday but got up and watched the final minutes. He’s the team’s clear-cut No. 1 receiver after being acquired from the Cowboys in a March trade.

“He’s everything as advertised,” quarterback Jacoby Brissett said. “What you see on film and to be a part of it and come out here and see him work and prepare and have those conversations about why does he do certain things at certain times and to see that his plan works is extremely cool. He’s been fun to work with.

“He works extremely hard. He’s getting better. This offense is new to him, too. You can see when his confidence is going and when he’s getting going, it’s fun to watch.”

The injury bug has hit the receiving corps at the start of camp.

Bell is on the physically unable to perform list, Anthony Schwartz hasn’t practiced since pulling up Thursday running a route, Javon Wims (illness) hasn’t practiced and Isaiah Weston was waived after being carted off Saturday with a knee injury.

Derrick Dillon was signed, and Jakeem Grant Sr., rookie Michael Woods II, Demetric Felton and Ja’Marcus Bradley have moved up the pecking order and taken reps with the first-team offense.

With pads coming on today, here’s a first crack at predicting the 53-man roster

Stefanski said Monday he would read the 16-page decision of independent arbitrator Sue L. Robinson in which she handed down the six-game suspension for quarterback Deshaun Watson. Stefanski was asked Tuesday if anything gave him pause about having Watson on the team.

#Browns coach Kevin Stefanski said he read Sue L. Robinson’s report. Doesn’t have much to say about it. pic.twitter.com/ubQA6ftwvm

“I did read the report like I told you I would,” Stefanski said. “I will continue to be respectful of Judge Robinson and her ruling. I think that is really where my focus is.”

Commentary: Haslams have to take blame for all this mess, uncertainty

Brissett and linebacker Anthony Walker Jr. said they hadn’t read the decision and didn’t plan to.

“I feel that is Deshaun’s business and I would like to stay out of that,” Brissett said.

“That’s just not my business. I feel like that’s Deshaun’s stuff to take care of,” Walker said. “I didn’t want to put myself in that situation. It’s football here for us and he handles it the way he needs to handle it.”

“Josh Rosen just got here. As you know, there are not a thousand reps to go around,” Stefanski said. “You have to be real smart about how you do this. The reps are coming, but we are taking the long view in terms of the next couple of weeks with those guys and getting them ready.”

Rosen, the No. 10 pick of the Cardinals in 2018, is expected to compete with Josh Dobbs for the spot behind Brissett.

“He’s a good addition to the room,” Brissett said of Rosen. “It’s been fun to have him in the room with us and learn from him, honestly. I think our room is pretty good.”

Walker (groin) said he’ll be back “soon.” He’s been on the physically unable to perform list since the start of camp.

** Cornerback Reggie Robinson II (core muscle) joined those working on the side.

** Watson had Grant open deep behind the coverage but underthrew him, allowing safety Richard LeCounte III to break it up.