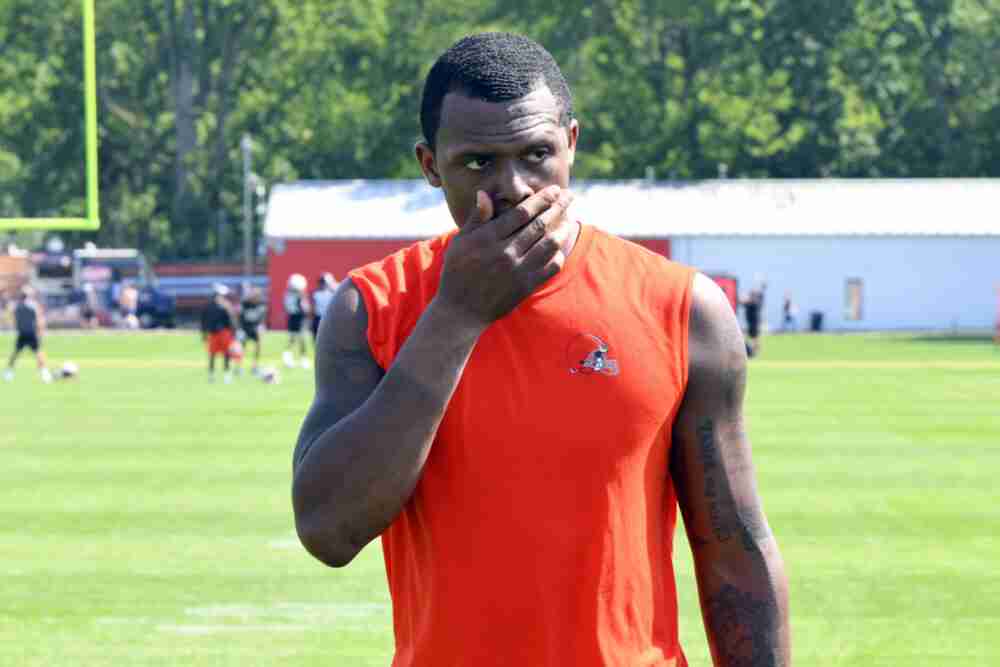 BEREA — The NFL has thrown the challenge flag, and quarterback Deshaun Watson’s availability to play for the Browns is again in limbo.

The NFL announced Wednesday it will appeal the six-game suspension of Watson handed down Monday by independent arbitrator Sue L. Robinson and had filed its brief. The NFL Players Association has two days to file a response.

The NFL is seeking an indefinite suspension of at least this season, a fine and mandatory treatment for Watson, who was accused by more than two dozen women of sexual misconduct during massage therapy appointments. He would be able to apply for reinstatement in 2023.


The Associated Press reported the league cited a lack of remorse from Watson, that he didn’t report the first incident and wasn’t truthful with NFL investigators, all of which Robinson noted in her 16-page ruling.

The Browns went from hoping Watson would miss only six games to uncertain if he’ll take a snap this season.

Commissioner Roger Goodell or someone he designates will rule on the appeal — the choice hadn’t been made, according to a league spokesman — with that decision final. Just as the arbitrator was installed as part of the collective bargaining agreement signed in 2020, Goodell was left with authority on appeal.

Whoever hears the appeal has the power to decrease, maintain or increase the punishment. The NFL argued to Robinson that Watson should be suspended indefinitely and is staying with that belief, so the suspension is expected to be lengthened.

Watson, 26, was signing autographs for military members after practice when the news broke and he appeared to be told. He didn’t comment as he was escorted off the field.

The Browns nor the NFLPA commented.

“According to Article 46 of the CBA, ‘the Commissioner or his designee will issue a written decision that will constitute full, final and complete disposition of the dispute and will be binding upon the player(s), Club(s) and the parties to this Agreement,’” NFL spokesman Brian McCarthy included in an email to The Chronicle-Telegram announcing the appeal.

According to the NFL’s personal conduct policy, the appeal will be processed on an “expedited basis,” limited to consideration of the terms of the discipline and without reference to evidence or testimony not previously considered and the “factual findings” and “evidentiary determinations” of Robinson are binding.

The NFL chose to appeal despite the threat of the NFLPA filing a federal lawsuit if it feels the league’s new punishment is too harsh. The league also chose to not accept the first decision of Robinson in this role nor listen to the request Sunday from Watson and the NFLPA not to appeal. Robinson is a former federal judge.

Robinson found that the NFL proved its case that he violated three provisions of the conduct policy — sexual assault as defined by the NFL, posing a genuine danger to the safety and well-being of another and undermining or putting at risk the integrity of the league.

The punishment recommended by Robinson didn’t include an additional fine — he’d forfeit only $345,000 in missed salary — but stipulated he must use only club-approved massage therapists for the duration of his career and have “no adverse involvement” with law enforcement or commit any further violations of the personal conduct policy.

A hefty fine could be added on appeal.

Robinson’s ruling was met with widespread criticism citing the leniency of punishment and inconsistencies within the decision. Sexual assault experts took issue with her emphasis on “non-violent” sexual conduct in determining the length of suspension, arguing often the force used is emotional or coercive and should be treated as serious.

The National Organization for Women and the Cleveland Rape Crisis Center put out statements ripping the punishment.

“It is unacceptable, insulting, and dangerous — but not surprising,” NOW’s statement said of the suspension. “The NFL and the multi-billion-dollar sports industry have a vested interest in enabling sexual misconduct, assault, and violence.”

The Browns and their fans have been waiting for resolution since the March 18 trade that brought Watson from the Texans and had hoped to have it with the six-game penalty. Watson would’ve been eligible to make his regular-season debut for the Browns on Oct. 23 in Baltimore and his home debut Monday night, Oct. 31, vs. the Bengals.

The Browns sent a net of five draft picks, including three first-rounders, to Houston and gave Watson a fully guaranteed five-year, $230 million contract. The guaranteed money is the most in NFL history.

Watson is a three-time Pro Bowler who led the NFL in passing yards in 2020. He didn’t play last season.

If the NFL increases the suspension to 10 or more games, the Browns may look to add a quarterback. Josh Rosen, the No. 10 pick in 2018 who’s 3-13 as a starter, and Josh Dobbs, who’s thrown 17 passes in the NFL, are behind Brissett on the depth chart.

The Browns have a talented roster, don’t want to waste their chance at making the playoffs this season and could try to sign Jimmy Garoppolo to replace or compete with Brissett if he’s cut by the 49ers.