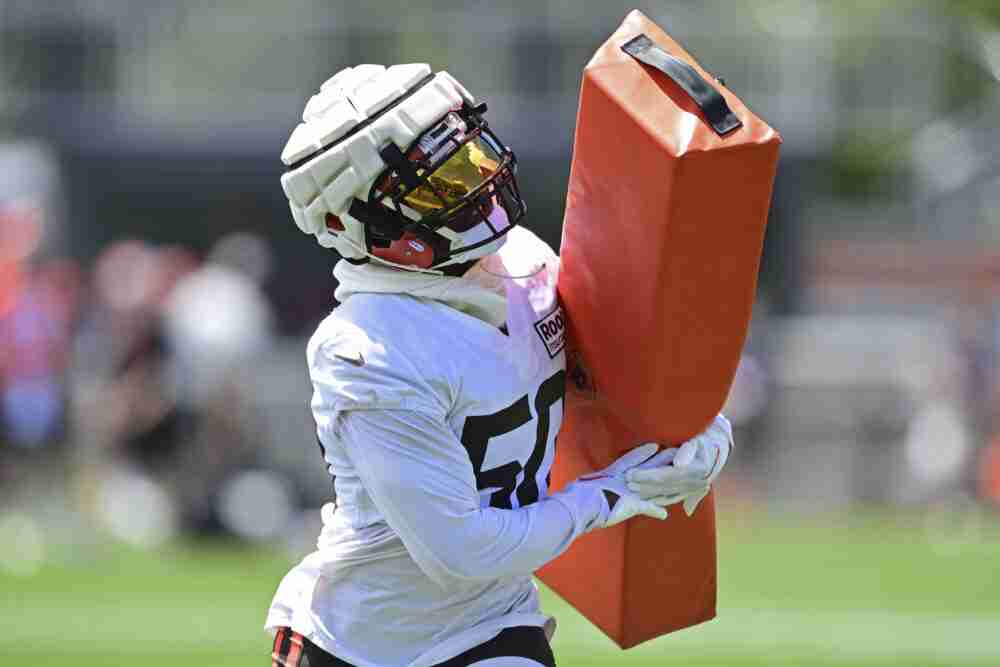 In prime position to be the starting middle linebacker, Phillips has to avoid the injuries that interrupted his first two seasons. He missed six games as a rookie with a knee injury and the first 12 games last year with a torn biceps suffered in training camp.

“This is a big, big year for me,” he said Wednesday before practice. “I’m just trying to gear myself up to have a healthy season. I know when I’m healthy, I’m on the field, everything’s going to fall into place and I’m going to be able to show everybody in Cleveland the player I am.”

Anthony Walker Jr. is back on a one-year deal after starting last season in the middle but hasn’t practiced because of a groin injury. Phillips has taken all the first-team reps and impressed the coaches. The Browns would prefer him to emerge as the longtime starter.

“What we’ve been really proud of Jacob is how he’s built his body,” linebackers coach Jason Tarver said. “He has gained weight, he’s extremely powerful right now. He’s extremely fast. He’s learned how much he needs to stretch. He’s always in doing extra. Whatever it is, stretching, all our regeneration stuff that we do, being first.

“Just every thought is, ‘I’ve got to get my body right so I can perform today. One day at a time.’”

With Walker due back “soon,” Phillips was asked if it’s his job to lose.

After two seasons with an incomplete grade, he believes his career’s still on track.

The No. 1 receiver returned Wednesday and participated in team drills early in practice. He didn’t practice Tuesday after rolling an ankle Monday.

Grant Sr. is primarily a returner who’s shown he can get open and catch the ball in the passing game. Woods II is a rookie sixth-round pick who’s found himself catching passes from starting quarterback Deshaun Watson.

O’Shea said he’s trying to keep Bell up to speed despite the lack of reps. Bell opened camp on the physically unable to perform list.

“Any time you’re not on the field, it presents a different type of challenge, but no different challenge than when you’re presented with other things,” O’Shea said. “We do enough with him from a walkthrough standpoint, we’re very intensive in a meeting room setting with him, so we spend as much time as we can to make sure we close that gap so when he does get on that field, he’s in position to know the information and go out there and try to execute.”

“He’s got all the techniques, he has a very good way of explaining it, too,” Conklin said.

Thomas has been a visitor at camp the last several days and has worked some with the offensive linemen.

Left-footed punter Corey Bojorquez (right foot) missed his third straight practice and hasn’t been on the field during the sessions.

** Defensive end Stephen Weatherly wasn’t on the field. He had missed time with a knee injury before returning Tuesday.

** Defensive end Myles Garrett and returner/receiver Jakeem Grant Sr. got the day off from practice and worked on the side. Garrett spent part of practice talking to owner Jimmy Haslam.

The Browns signed rookie receiver Daylen Baldwin (6-2, 212) to help carry the load. O’Shea told him what routes to run, and Baldwin caught a pass. He spent last year at the University of Michigan after spending time at Morgan State and Jackson State.

Notes: Amari Cooper not practicing due to ankle injury; Kevin Stefanski says he’ll be back ‘pretty soon’
Notes: Martin Emerson Jr. has intelligence, ability to go along with impressive size