Injury, rehab not about to keep All-Pro right tackle Jack Conklin down 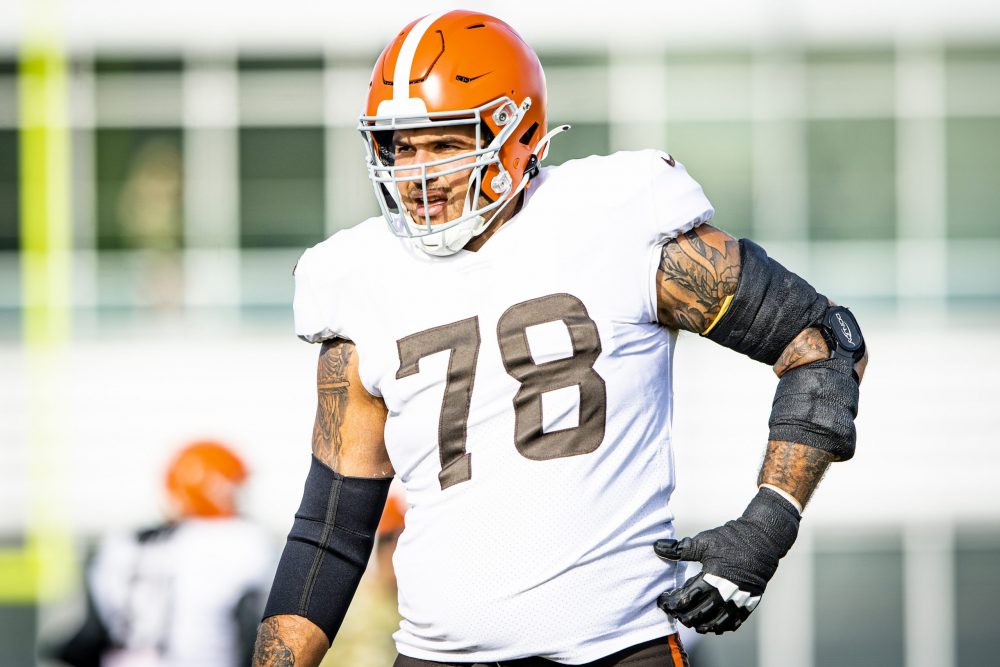 BEREA — Jack Conklin’s 2021 season was already a nightmare. He wasn’t going to add a humiliation on top of all the pain.

So despite his right patellar tendon tearing Nov. 28 during a loss in Baltimore, Conklin made sure he walked to the sideline — his leg crumpling at one point — before being driven to the locker room.


The doctor would have his say, but Conklin, a two-time All-Pro right tackle, had recovered from a torn left anterior cruciate ligament early in his career and was set on making sure he hadn’t taken his last NFL snap.

“Going into this one there was no doubt that I was going to come back and be able to get through this and know the process and know to dominate the process,” he said.

He’s well on his way, returning to the practice field Monday for the first time. He spent all but a couple of weeks of the offseason at Browns headquarters rehabbing and training.

“It’s coming along well,” Conklin said. “I’m just getting back started practicing, so I just gotta ease in and let my knee get back to feeling used to football. But so far everything is going great. I feel stronger than I’ve been in a long time after putting in all of those hours and I feel good.”

The expectation is he’ll be ready to start Week 1 in Carolina on Sept. 11.

“I don’t want to put any numbers on it or timeline, but I’m working towards that, that’s my goal,” he said.

The timing of the torn patellar was particularly cruel.

Conklin had missed three games with a dislocated left elbow when he returned to face the Ravens in prime time. On his 21st snap he was pass protecting against a bull rush.

“Yeah, it sucks. Finally get back thinking I’m going to be ready to go and then sit down and have the patellar pop open,” he said. “It’s not fun, but it’s part of the game we play. This stuff happens and really what defines you when something happens like this: Do you end your career? Or do you come back and work your (butt) off and turn it into a positive and a growing experience.”

Doctors discovered during surgery a bone spur behind the patellar that tore off and ripped the tendon. The spur hadn’t shown up in any scans but was painful enough for Conklin to miss Weeks 6 and 7.

“That was probably the start of what was going to happen,” he said.

He said the recovery from his torn ACL in 2018 was “very helpful” in knowing what to expect from the tedious rehab in which the improvement is “very, very gradual.”

“He was here all offseason working his butt off trying to get back,” Harris said. “It is good to see him finally starting to get back into the swing of things.”

“I’m really impressed with Jack and how he’s worked,” coach Kevin Stefanski said. “He’s taken every single day as an opportunity to get better and get stronger. It’s one thing to rehab an injury and get healthy. He’s trying to get stronger and he’s done that. I’m very impressed with his work ethic and I think that rubs off on his position.”

The amount of time in rehab dedicated to strength training made an impact.

“Just how much quad strengthening and stuff we do throughout this process, I’m able to squat more, deadlift more than I have probably since college,” Conklin said.

He credited his wife, Caitlyn, with supporting him through the tough stretches.

“We were married when I did my ACL and she saw how that was brutal,” he said. “I was down quite a bit. She was really just my rock there, just telling me, ‘Hey, you’ve been through this, you know how to come back from this, you’ve done it before, you can do it again.’”

Conklin restructured the final year of his contract in the offseason, reducing the salary from $12 million non-guaranteed to $8 million guaranteed, with the chance to make up the $4 million in playing-time incentives. He signed a three-year, $42 million deal as a free agent in 2020.

“It was good for the team and me,” he said of the restructuring. “That point in the process, they didn’t know how fast I was going to come back or when I’d be able to and they wanted to have flexibility to bring somebody in if they needed to bridge the gap. And luckily, where we’re at now, it’s looking good.”

He said the guaranteed money showed general manager Andrew Berry and the organization “has my back,” and Conklin would like to repay them with a strong year that leads to an extension. He wants to make Cleveland his home as his kids get ready to begin school.