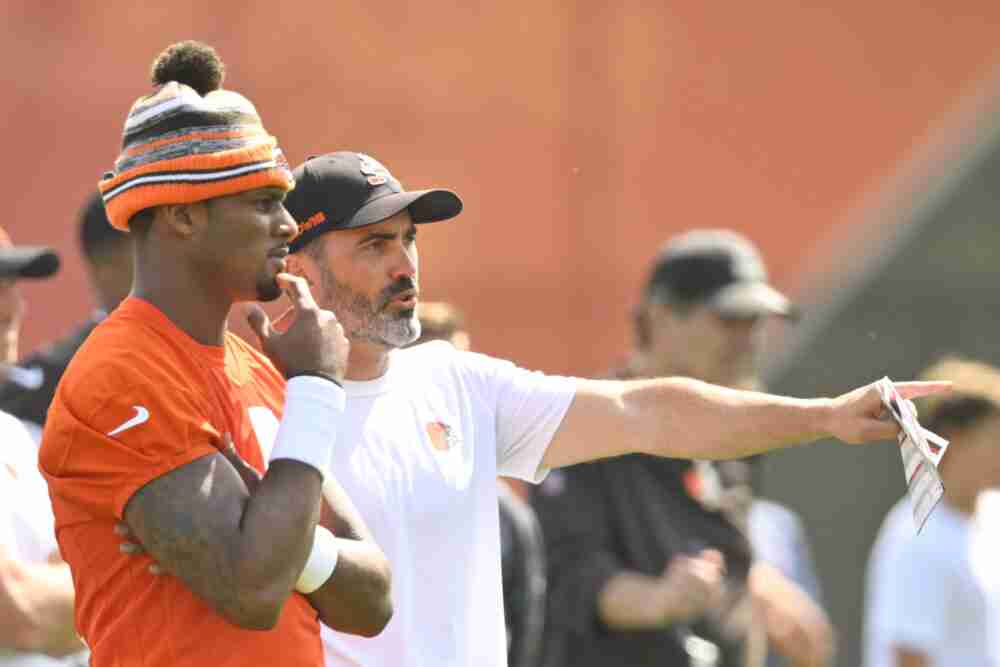 Despite the likelihood of Watson’s suspension being lengthened from six games on appeal, possibly to the entire season, the Browns conducted business as usual Friday during training camp. Or as usual as things can be with the new starting quarterback’s future in doubt.

Coach Kevin Stefanski said he’s waiting for “concrete” information regarding Watson’s suspension before he’ll adjust his plan and give backup Jacoby Brissett more repetitions with the starters. In the meantime, Watson plays the role of franchise quarterback.


“We’ll just kind of await clarity on the situation, but just continue to move ahead with what we’re doing,” Stefanski said before practice. “I hope in the next few days that those types of questions get answered.”

Watson, 26, was accused by more than two dozen women of sexual misconduct during massage therapy appointments. Disciplinary officer Sue L. Robinson, who was jointly appointed by the NFL and NFL Players Association, ruled Monday that Watson should be suspended without pay for six games to start the season.

The NFL seeks an indefinite suspension of at least a year, a significant fine and for Watson to undergo treatment.

The NFLPA filed its reply brief Friday afternoon. A federal lawsuit could follow.

There’s no set timetable for Harvey to reach a decision, but next week seems likely. His decision is final.

Injury, rehab not about to keep All-Pro right tackle Jack Conklin down

Watson has taken the vast majority of first-team reps throughout eight camp practices, with Brissett getting a few. With the preseason opener next Friday in Jacksonville, Stefanski said the organization is still discussing whether to play Watson and Brissett, assuming Watson is still eligible. He might not be if he’s suspended for the entire season.

“It’s coming up here on Friday, so we’re talking through some of those scenarios,” Stefanski said of the Jaguars game. “I haven’t finalized those just yet.”

He wants to keep all of his options open until one is closed for him.

The Browns have been waiting for resolution since they traded for Watson on March 18 and signed him to a fully guaranteed five-year, $230 million contract.

“Obviously we want to know what’s going on and be done with it,” right guard Wyatt Teller said. “If any team was in that situation, that’s what they’d want. We’ve got to worry about your individual thing and kind of let that be handled by whoever’s in charge.

“Obviously it’s big, but we’re focused so much on what we’re doing.”

Cornerback Greg Newsome II said the situation hasn’t affected him at all and it’s the responsibility of each player not to let it.

“I would definitely like to see it resolved, but at the end of the day, that’s none of my business,” he said. “They’re going to take their time with it and we’ve just got to focus on ourself.”

Teller saw his championship dreams disappear in an 8-9 season a year ago. It could happen again if Watson misses most or all of the season.

“Last year, I thought we were going to ‘go to the Super Bowl’ — I guess that’s the joke the Browns always have — but I really thought we were a dominating team and we just couldn’t stay healthy,” Teller said. “So I’m not focused on anything else but Game 1.”

Teller said Watson has done a good job dealing with the ups and downs of his case.

“That’s something I’ve actually got to commend him on,” Teller said. “He’s the same person every day. He comes in ready to work.

“I know everybody’s got something to say, they’ve got an opinion on him. Football is where you kind of get away from that.”

Resolution from the appeals process could spur the Browns to make a move at quarterback. San Francisco’s Jimmy Garoppolo is available in a trade and could be cut before the season, and former NFL MVP Cam Newton is a free agent.

“I am not going to have those type of discussions on who we have looked at and have not,” Stefanski said. “I will kind of leave that internal.”