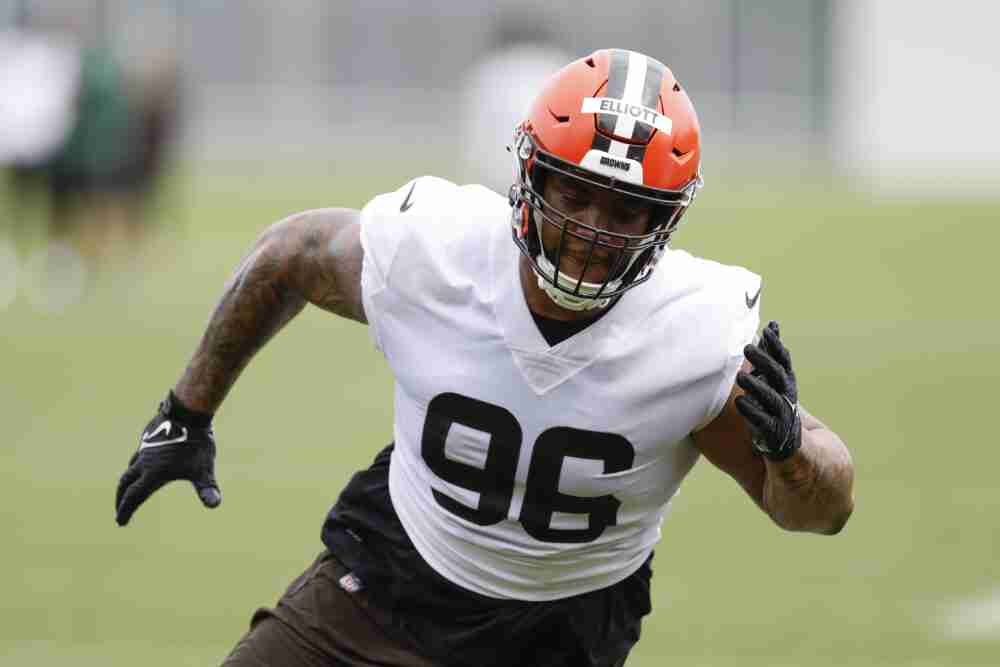 Elliott trained occasionally, not obsessively like teammates and peers around the league.

“It was bad,” the defensive tackle said last week in a candid interview with The Chronicle-Telegram. “Probably like once or twice a week.”


What was he doing instead?

“Not even partying, just not focused, just not where I needed to be,” he said.

Elliott, 24, changed his routine after the 2021 season. He stayed in town and worked out five days a week at Browns headquarters with the team’s strength staff and alongside right guard Wyatt Teller and center Nick Harris.

“I saw him make that decision, taking that part serious, taking the work from day to day, Monday through Friday serious,” Teller said.

Elliott’s body is the proof and the payoff. He’s 6-foot-4 and bulked up to 325 pounds — “I feel like this is my real weight” — but looks like he weighs 280, according to coordinator Joe Woods.

“I think he left at the end of last year realizing going into Year 3 he’s not where he wants to be,” Kiffin said. “He got stronger, he got faster, his feet are unbelievable and he’s moving really well.”

Elliott was a third-round pick out of Missouri in 2020, No. 88 overall, and general manager Andrew Berry envisioned him as the future of the team’s tackle position. The Browns loved his quickness and disruptiveness from the interior and identified an intangible that could end up jump-starting his career.

“Jordan has an incredible level of self-awareness,” Berry said after drafting him. “That was one of the things that really resonated with us and stuck with us is really just his eye toward self-improvement, his ability to reflect and just the strides that he has made even in college.”

For two years in the NFL, Elliott’s evolution was on hold.

“I’ve definitely had self-awareness but I didn’t have the motivation,” Elliott said. “The lack of focus, the lack of attention to detail, just not being a pro.

“I was self-aware but I wasn’t self-aware to the point I wanted to improve. It’s taken me just till now to understand it.”

Notes: Martin Emerson Jr. has intelligence, ability to go along with impressive size

Kiffin said he didn’t see complacency or a lack of commitment from Elliott, but something finally clicked internally.

The lack of impact in two seasons helped light the fuse. He’s played 32 games, including four starts, totaling only 41 tackles, none for loss, a half-sack, four quarterback hits and a pass defensed.

“Honestly right after the season, I wasn’t satisfied,” he said. “I knew I had to make changes if I wanted to expect something different, like I can’t expect a different outcome and just be the same person.

“Just that desire, maybe that shame or embarrassment of how I was performing because it wasn’t to the level I wanted in my mind.”

Elliott got married in March to Symmone and credits her with helping him stay focused and being supportive despite the sacrifices in time spent as newlyweds.

“I’m just always up here,” Elliott said of the team facility. “That’s the difference, I want to be up here. I’m constantly trying to find ways whether I’m recovering, studying film, I’m up here.

“I look at home as just a temporary place now, as before I couldn’t wait to get home. This is my home now. So definitely have a newfound love for the game.”

Kiffin said it’s “big-time” for Elliott to realize his shortcomings and that he’s started to take to heart the lessons taught by veterans.

“A lot of that just comes with age and wisdom and growing with experiences, seeing it out here,” Kiffin said. “He’s gone through Sheldon Richardson the first year, then Malik Jackson the next year, so being able to pull from those guys and learn. And I’m sure those guys told him, look, nothing’s guaranteed in this league. It speaks volumes that he’s able to do that himself.”

THE TIME IS NOW

Jackson and Malik McDowell weren’t re-signed, leaving vacancies at the starting tackle spots. Berry hasn’t invested a lot of resources in the interior of the line, so the Browns were counting on Elliott to step into a primary role.

“I guess it’s pressure, but not in a negative way, it is just you gotta have pressure on you sometimes to make you take that next step,” he said. “So that’s kind of how I’m looking at it. I’m excited about it.”

“Now he knows the expectations, what’s going to be asked of him and we definitely need him to step up for us this year,” Woods said.

Elliott and Taven Bryan, a former first-round pick of the Jaguars signed to a one-year deal in free agency, have been the starters through a week-plus of training camp. Behind them are Perrion Winfrey, a rookie fourth-round pick, and Tommy Togiai, a fourth-rounder in 2021.

Berry hasn’t added a proven veteran despite the lack of successful experience at the position.

“We’re at a position where we’re trying to develop young players along with some free agents,” Woods said. “We have some youth at the defensive tackle position but they’re talented. So along the way they’re probably going to make some mistakes as they’re growing into the position and learning it, but I think that’s just the process we’re going to have to go through this year.”

Elliott feels good about the group and said Bryan and Winfrey fit what Woods wants.

“Just that explosive, up-field type of D-tackle, disruptive,” Elliott said. “That’s definitely them, like to the core.”

As Elliott’s focus sharpens and the game slows down in his third training camp, the lessons learned from the veterans he’s played with — Richardson, Jackson, Larry Ogunjobi, Myles Garrett — have begun to resonate.

“I definitely learned from them, technique things, just off-the-field studying things, but I didn’t implement those things until now,” Elliott said. “That’s definitely a lot of knowledge that I learned from the guys and it’s a blessing that I can recall that information and utilize it now.”

Elliott wants so much to be different moving forward — eliminating the “inconsistent play,” building on his improved “maturity,” establishing himself as a key piece of what could be a dominant defense.

“It has taken me just till now to understand it, to be honest,” he said.

What he doesn’t want to change in the future is his employer.

When he was drafted he talked about his mom’s boyfriend having had a dream about the Browns taking him.

“I just felt like it was something that was meant to happen,” he said at the time.

He still does. Despite the self-inflicted issues of the last two years.

“I definitely feel like this is home, and that’s why I’m trying to just stay consistent so that it remains that way,” said Elliott, who has two years left on his rookie deal. “I love it here. I love the city, love the fans, the atmosphere, just good energy.”