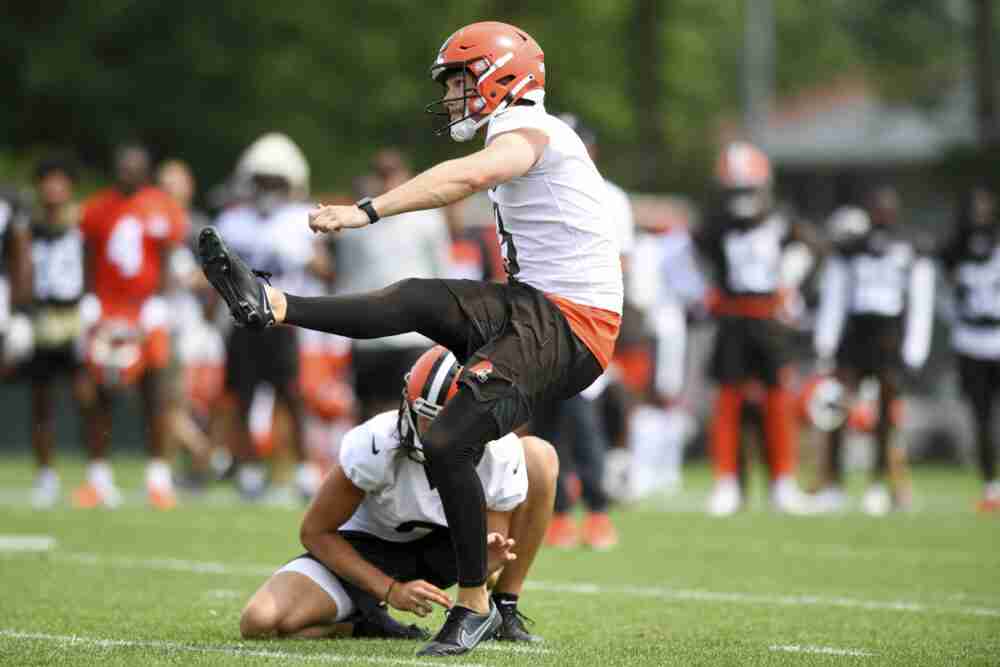 BEREA — Cade York built a reputation at LSU as a big-time kicker who could convert field goals in many types of conditions. Most notably a 57-yard game-winner on a foggy night against the University of Florida in December 2020.

One thing York did sparingly, though, was kick off, as LSU had another player handle that duty. That has changed since the Browns drafted him in the fourth round in April, and the self-motivated York is looking to develop under special teams coordinator Mike Priefer and be a difference-maker on more than just field goals and extra points.

#Browns K Cade York on his approach to kicking off ⁦@ScottPetrak⁩ pic.twitter.com/puRQ8gVVwN

Although York is working to improve his variety of kickoffs after having just three in college, he is making sure not to ignore the qualities that made him an early Day 3 pick.

“There’s small things I work on continuously that I’ve been working on my whole career, including college,” York said. “It’s always getting better, always trying to improve on what I do and be more consistent when I’m hitting my best ball.

“I’ve had certain focuses where I’ve keyed on that have brought some success, but I’m not coming in here thinking I need to change anything because what I’ve done has gotten me here, so just keep building on that and have success.”

#Browns K Cade York on building on the foundation he had at LSU ⁦@ScottPetrak⁩ pic.twitter.com/Zuvf2FleeY

York, who won a national title as a freshman at LSU, doesn’t lack confidence in his long-distance kicks.

With a resume that boasts All-Southeastern Conference and All-America honors, York doesn’t blink when he takes the field, regardless of the length of the kick.

“Anything in my range, I’m going out there thinking the same way — just three points on the board,” York said. “Whether it’s a short field goal, long field goal, PAT, they put me out there for it, I’m going to have confidence in myself that I’m going to put it through.

His huge right leg has been on display through the first week-plus of camp. Perhaps most impressive was a 53-yarder that hit the top of the left upright and caromed through.

He made 35- and 33-yard field goals Sunday during the two-minute drill to force overtime. Then he made a 45-yarder — it was close, as the ball hooked over the left upright — with the whole team watching to cancel meetings Sunday night ahead of the players’ day off Monday. His teammates lifted him up as their new hero.

“He’s very confident in his ability,” Priefer said. “He’s got a lot of leg talent. That’s all going to help him as he goes forward.”

Summer in Berea is nothing compared to falls and winters on Lake Erie at FirstEnergy Stadium. The swirling winds can be tricky for a kicker, and the Browns have had nine since Pro Bowler Phil Dawson left in free agency following the 2012 season.

While a Monster Truck rally and concert have prevented York from getting down to FirstEnergy Stadium during training camp, the Browns were able to take him, long snapper Charley Hughlett and punters Joseph Charlton and Corey Bojorquez downtown during the offseason program to familiarize them with the setting. Hughlett has played 57 games in Cleveland in his eight-year career, while Bojorquez punted for the Buffalo Bills at Cleveland in 2019.

The next time York will be able to kick at the stadium will be a preseason game against the Eagles on Aug. 21.

“It definitely gives me an early advantage on just getting my visuals, getting to learn the stadium, how the wind blows, stuff like that, so it was a good head start,” York said.

He’s settling into a rhythm with Hughlett and the punters as the holders.

“It’s been awesome,” York said. “It’s only four of us, and we spend all day together, whether we’re sitting in meetings together or a hot tub or cold tub, locker room or out there on the field when we’re getting ready, so it’s been great. They’ve been pretty cool to me. Just a little different having that much of an age difference between the oldest guy and the youngest guy. I’m used to just having all the guys around (my age). It’s been cool, and we’ve been able to connect really well. It’s gone good.

“Charley is so damn good that he can snap it back and the laces are already at 12 o’clock almost every time.”

The next test will come Friday night in Jacksonville in the preseason opener.

“I’m excited about it,” York said. “It’s not necessarily something where I’m anxious or scared about. Yeah, the first one’s probably going to be the most nervous of all of them, but I haven’t had any problems with nervous situations in the past, so I’m hoping it all just goes smoothly.”

“He’s only 21 years old, which is incredible. He’s very mature. He understands his craft. He’s very smart and he’s very confident. I think that’s going to help him here, especially in Cleveland.”

Bill Callahan says Jedrick Wills Jr. ‘coming along,’ benefiting from work with Joe Thomas
Josh Rosen would love to change his rep as just a backup QB, but needs more reps to do that