Mailbag: Who’s stood out, fallen behind at training camp? Can defense carry team without Deshaun Watson? 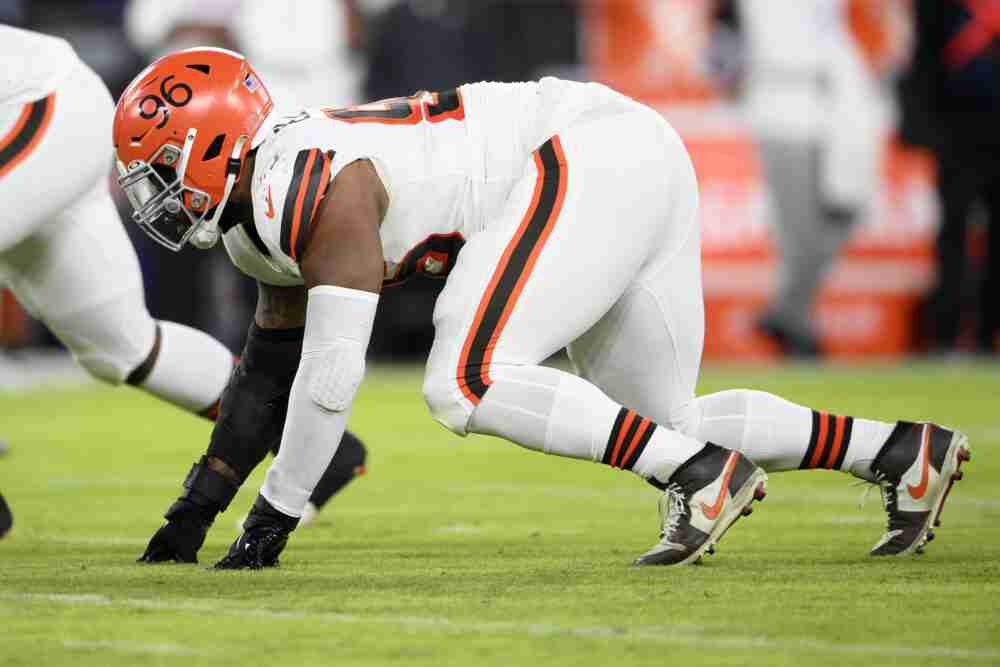 Q: At this early stage of camp, do any of the athletes that were on the team last season jump out at you as having made major offseason strides in terms of their conditioning, muscle mass, weight, etc.?

A: Defensive tackle Jordan Elliott and center Nick Harris are the obvious answers. Not only do they look bigger, coaches and teammates have raved about their progress.

Elliott is easier for me to notice. He’s up to 325 pounds and stands out among the defensive tackles. I also talked to him about his newfound commitment to offseason work in a candid interview.

Harris remains among the smallest offensive linemen — he’s listed at 6-foot-1, 293 pounds — but spent the offseason in Berea with Elliott and others working on strength training. He has the athleticism desired for the wide zone blocking scheme and needs the power and durability to match.

Q:
With Myles Garrett, Jadeveon Clowney, Jeremiah Owusu-Koramoah and our DB room, is the defense good enough to carry this team without Deshaun Watson?

A: I expect the defense to be excellent. Garrett is one of the game’s best, the linebackers have speed and the secondary is deep and talented. But even if the defense plays like a top-five unit, I’m not sure that’s enough to make up for the absence of Watson. That’s not an indictment on the defense, just a nod to the importance of quarterback in today’s NFL.

I suppose there are different definitions of “carry.” I think the defense will be a strong suit, but I’m not convinced it can deliver the Browns to the playoffs without quality quarterback play.

Commentary: Andrew Berry should stand his ground, not give in to Kareem Hunt’s trade request

Q: What would happen to Watson if before his suspension is finalized he is hurt and put on injured reserved and ruled out for the year? Would the suspension revert to the following year?

A: That’s an interesting question. I’m pretty sure a season-ending injury wouldn’t bump the suspension to 2023. I don’t think the punishment is tied to his availability.

But I get where you’re going. And the possibility that he could miss time that he’d miss anyway is a reason the NFL is asking for a larger fine on appeal that isn’t tied to his low base salary. A fine of several million dollars would be felt regardless of how much he played, and for what reason.

Q: Did you play enough golf over the summer? I know it’s early in camp, who is making a name for themselves and what player could be in trouble making the team?

A: I can never play enough golf, so no. But I got in a decent amount.

As for your Browns question, let’s start with those who’ve made a good impression. Rookie receiver Michael Woods II before he reinjured his left hamstring. Tight ends Zaire Mitchell-Paden and Miller Forristall have had good moments, which is important because the depth behind David Njoku and Harrison Bryant is a serious question mark. Rookie running back Jerome Ford looks the part, as does rookie defensive end Alex Wright, and they’ve both made plays. Cornerback A.J. Green has stood out just about every day, and rookie kicker Cade York hammers the ball.

Now for those who could be in trouble. It can’t be good for offensive lineman Blake Hance that Drew Forbes got most of the reps with the starters when left guard Joel Bitonio got a day off. The Browns view Hance as an interior lineman after he struggled at tackle last year, and it’s crowded inside with Forbes, Ethan Pocic and Michael Dunn. I don’t think receiver Anthony Schwartz is in danger of getting cut, but he’s off to a rough start in his quest to solidify reps as the third or fourth receiver. He injured his knee running a route on the second day of practice and missed a week. In two practices since returning, he dropped a pass over the middle and couldn’t hang on to a contested catch in the end zone.

Q: How often are they sending York to the stadium for work?

A: Special teams coordinator Mike Priefer answered this Sunday. He said the specialists went to the stadium five or six times in the spring but haven’t been back during camp because of a Monster Truck event and a concert. The next time York will kick on the lake is Aug. 21 for the preseason game vs. the Eagles.

Q: Maybe I missed it, but were we ever given an explanation on why Nick Chubb wasn’t on the field at key times last year?

A: Coach Kevin Stefanski tried to explain during last season. The reasoning is the coaches give the third-down/two-minute responsibilities to someone else. When Kareem Hunt is healthy, that’s his job and not using Chubb in that role isn’t a big deal. But with Hunt missing time last year, the drop-off from Chubb was more noticeable.

Q: Do you believe the Watson saga has cost the Browns any measurable loss of the fanbase? I’ve loved the team since my childhood, but this is my breaking point. I’m going to be cheering for another team during Watson’s tenure, but I’m probably in the extreme minority.

A: It’s so hard to quantify, but I’ve heard plenty of people echo your sentiments, so I do think there is a measurable loss. This is purely anecdotal, but the team website has single-game tickets still available, which seems unusual for this time of the year.

I know the reaction to the Watson acquisition covers the entire spectrum. I truly appreciate your feelings and stance. I also understand those fans who are so invested in the team they can’t stop rooting for it no matter how they feel about Watson.

Q: Do you think the Browns will add any interior D-linemen or veteran WRs before the start of the season?

A: I entered camp with this near the top of my list of questions. After talking to, writing about and watching Elliott, I think they will stand pat at defensive tackle. Elliott, Taven Bryan, rookie Perrion Winfrey, Tommy Togiai and respected veteran Sheldon Day should be enough, especially with plans to move an end inside in many passing situations.

Receiver is trickier. The Browns want to give rookie David Bell and Schwartz a chance to develop and fill significant roles, but their injuries early in camp were a setback. They’ll have two or three preseason games — Stefanski hasn’t decided if they’ll play in the opener Friday in Jacksonville — and plenty of practice time to prove they’re ready before the roster is set. But general manager Andrew Berry knows he may need to add a proven veteran behind starters Amari Cooper and Donovan Peoples-Jones.

Mailbag: Would Browns be better off if Deshaun Watson is suspended for whole season rather than 8 or 12 games?
Mailbag: Is Jacoby Brissett good enough to handle defenses loading box to stop run?