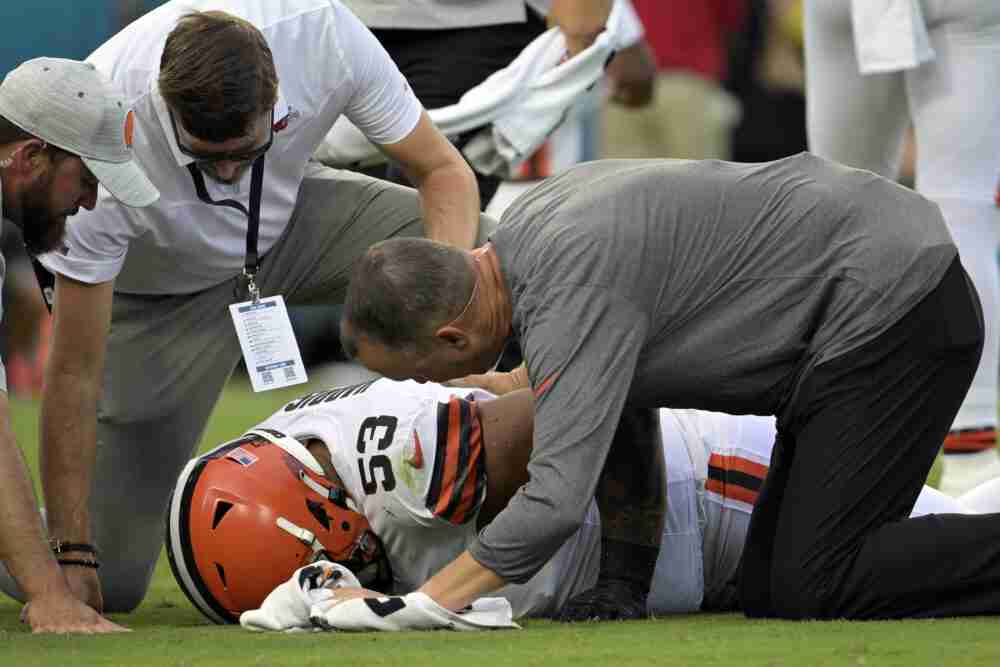 Center had been settled.

The Browns were confident Nick Harris was ready to step into a starting role in his third season and complete an offensive line filled with Pro Bowlers and high draft picks.

But Harris will “likely” need season-ending surgery, coach Kevin Stefanski said Saturday on a Zoom call. Harris injured his right knee on the second snap Friday night during the preseason opener in Jacksonville, Fla., and was carted off the field.

Jacoby Brissett will get bulk of first-team reps starting Sunday


“We are still gathering information there so I want to make sure that we have all of the information before we come to that conclusion,” Stefanski said.

Harris’ knee buckled as he tried to fend off a bull rush.

“All of these injuries stink,” Stefanski said. “You do not like anybody to get injured. Nick certainly is a guy who has been working so hard this offseason. Really hoping that it is not a season-long thing because the kid just worked so hard.”

The injury immediately brought up questions of whether the Browns would bring back JC Tretter, who was the starter for the previous five years before being cut in a salary cap move in March. Tretter, 31, remains unsigned.

Stefanski wouldn’t comment when asked about Tretter, saying the decision belongs to general manager Andrew Berry. Instead, Stefanski used the opportunity to compliment Ethan Pocic, who replaced Harris against the Jaguars.

“I do want to make note that Ethan did a nice job (Friday night), and he has done a nice job since April,” Stefanski said. “We went out and got him for a reason. Excited about what he did last night.”

Harris, a fifth-round pick in 2020, added muscle during the offseason, but his strength is the ability to move in the wide zone run blocking scheme. He’s 6-foot-1, 293 pounds, while Pocic is 6-6, 320 pounds.

“He is a physical football player,” Stefanski said of Pocic. “He is a big center. He has really good size. Has played a lot of football in his career.

“For us, it is just getting him good exposure to what we do, which we have been doing since April. I think he has done a nice job with (line) Coach (Bill) Callahan and (assistant line) Coach (Scott) Peters and understanding our techniques. I really think we have a guy who has done that in some big moments.”

Pocic started all 14 games he played in 2020 and 10 of 13 last year. The blocking calls could be tweaked with him in place of Harris.

“We will definitely play to our players’ strengths. No two players are the same,” Stefanski said. “We will ask Ethan to play like Ethan and not play like somebody else.”

Tretter joined the Browns in 2017 and helped stabilize the line. He played every snap until testing positive for COVID-19 and missing a game last season.

Releasing him saved $8.2 million on the salary cap and opened a spot for Harris. Chronic knee pain has kept Tretter, who’s president of the NFL Players Association, from practicing on a full-time basis for the last couple of years.

“His leadership — both within the locker room and the field — will be missed,” Berry said when Tretter was cut March 15.

“To the entire Browns organization and the city of Cleveland, thank you for a wonderful 5 years,” Tretter wrote on social media the same day. “I’m going to miss my teammates. I’m leaving Cleveland with incredible memories and friendships that will last much longer than my time here. I wish you all nothing but the best.”

If the Browns are content with what they have on the roster, Pocic would become the starter with Blake Hance, Michael Dunn and Hjalte Froholdt competing for roster spots as backups in the interior.

The coaches had been impressed with Harris’ growth in his first two years and in the offseason.

“It’s fun to see his progress and see his development,” Callahan said recently. “To see him grow, not only physically, because he’s done a great job in the offseason in the weight room, but mentally — picking up the system, learning how to communicate calls, hitting players in the right spots.

“What’s really impressive is his dialogue off the field and the questions that he asks, they’re excellent. They’re really well-thought-out, they’re meaningful and they’re applicable. I would say his development mentally has really grown, more so than his physical development.”