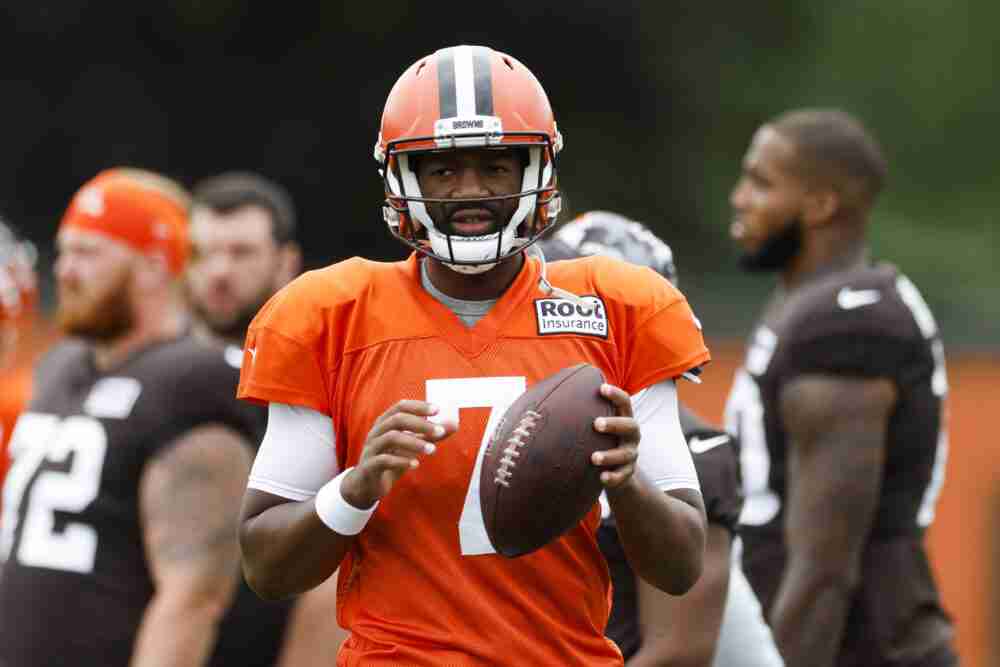 Jacoby Brissett has the wheel.

Brissett will take the bulk of the first-team quarterback repetitions beginning Sunday when the Browns return to practice, coach Kevin Stefanski said Saturday on a Zoom call. Deshaun Watson took all but a few of the starter reps throughout the offseason program, the first two weeks of training camp and the preseason opener Friday night vs. the Jaguars.

“That has been the plan really from the beginning is just to at some point let Jacoby get the majority of them, still work Deshaun, still work Josh Dobbs and still work Josh Rosen,” Stefanski said, referring to the other quarterbacks.


The move is necessary because Watson will start the season serving a suspension for violating the NFL’s personal conduct policy. The length of the suspension isn’t known after the league appealed the six-game penalty handed down by independent arbitrator Sue L. Robinson on Aug. 1.

Peter C. Harvey, who was appointed by Commissioner Roger Goodell, hasn’t ruled on the appeal. The decision could come as soon as Monday, or the league and Watson could reach a settlement.

The Browns have long expected Watson to miss at least the start of the season following more than two dozen accusations of sexual misconduct during massage therapy sessions. But they wanted to establish him as the long-term starter and leader of the offense and get him reps after not playing last season while with the Texans.

He will continue to practice as long as Harvey doesn’t suspend him for the entire season. In that case, he would be required to stop practicing and playing in the preseason.

“He will keep on that same process and making sure he is running the show when he is in there. He does a nice job in the quarterback meeting room with those guys, so I just think this is also the natural progression for him moving forward.”

Brissett is expected to play in the preseason finale Aug. 27 against the Bears.

Before the Jaguars game, Watson apologized for the first time since the first lawsuit was filed in March 2021.

“I’m truly sorry to all of the women that I have impacted,” he said.

“I just think Deshaun has been very committed to being the best version of himself,” Stefanski said. “That is off the field and that is on the field obviously when he is in this building, but more so I do think he wants to learn and grow as a person. That is important.”

The first-team offense didn’t get a first down in three series with Watson. He was 1-for-5 for 7 yards in his first game action since Jan. 3, 2021.

“Anybody who is doing something that they have not done in 20 months, there is going to be an element of getting back into it and getting used to it,” Stefanski said. “Ultimately, he did a nice job of running the offense. I know we would all want more production and those type of things, but you can’t overreact to a small sample size either direction, whether it is good or bad.”

CATCH IT IF YOU CAN

“Obviously you are going to have some drops as a receiver. He takes them personally,” Stefanski said.

Schwartz was a third-round pick in 2021 and had 10 catches in 14 games as a rookie. Stefanski doesn’t see him losing confidence.

“No. Preseason games are for work,” Stefanski said. “You go out there, you make a mistake, you correct it and you get back to work.”

** Rookie sixth-round receiver Michael Woods II (hamstring) will miss at least another week but is “progressing.”

** Rookie third-round receiver David Bell (foot) didn’t play vs. the Jaguars. He’s back practicing after missing the start of camp.

Rookie cornerback Martin Emerson Jr., a third-round pick, credited his physicality for the 74-yard interception return for a touchdown against the Jaguars. Emerson (6-foot-2, 201 pounds) ripped the ball away from receiver Jeff Cotton Jr.

“I pride myself on being physical,” Emerson said after the game. “At the line I was real sturdy and was being physical, trying to get my hands on. If I wasn’t with my technique, I probably wouldn’t have made that play.”

Stefanski likes that Emerson carried the practice lessons to the game.

“He is a very, very diligent kid,” Stefanski said. “He wants to get better. He spends a lot of time in the meeting room, on the field and extra time on the field because he wants to perform at a high level for us.

“Within that big play he made, that is a snapshot of his skill set on display — being physical with the receiver, making a great play, taking the ball away and showing his speed really on that return.”

Receiver Ja’Marcus Bradley got the first shot as the Browns try to replace kick returner/receiver Jakeem Grant Sr., who suffered a season-ending torn Achilles tendon Tuesday in practice. Bradley returned all the kickoffs (two for 31 yards) and punts (two for 5) against the Jaguars, but Stefanski said he isn’t necessarily the first option.

“There are a bunch of guys who we are going to work in there,” he said.

Grant was signed in free agency to return kickoffs and punts and play receiver. Stefanski said it “remains to be seen” how being without Grant will affect the final roster construction.

“We have some guys who can do those jobs — punt return and kickoff return,” he said. “We will kind of look at some other guys, as well, and see who can provide us some meaningful reps there. Those are the things we are working through as a staff, but it does go back to that point on versatility and having multiple guys who can do multiple jobs.”