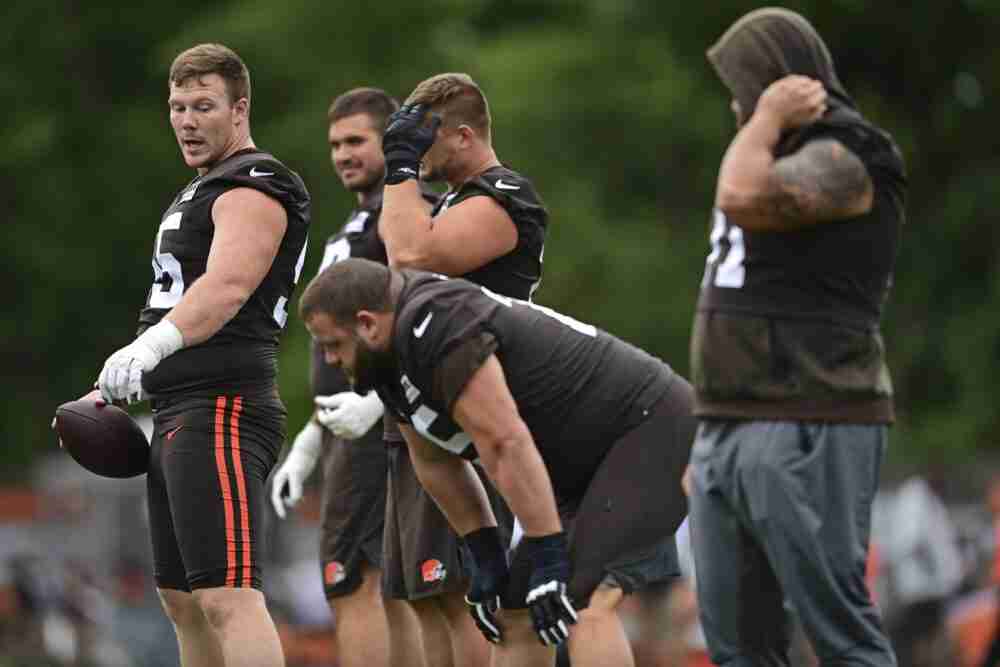 BEREA – The Browns sought to build depth on the offensive line during the offseason, prompting them to sign veteran interior lineman Ethan Pocic, who had 40 starts and 57 games played over five years with the Seahawks.

That depth is being tested after just one preseason game, as starting center Nick Harris suffered what’s “likely” a season-ending knee injury Friday in a win over the Jaguars. Pocic replaced him with the first-team offense Friday and again Sunday in practice and could keep the job for the season.

“You’ve always got to stay ready and take it one day at a time,” Pocic said Sunday before practice. “Just always prepare.

“The way I see it, man, this is the NFL. I don’t know what’s going to happen. I don’t know if they’re going to bring someone in or whatnot, but I can tell you, I’m just going to prepare one day at a time. I’ve been in this league five years, so I know how things work. I know you’re always competing. So that’s my outlook, and I think competition makes you better. I really do. We’re always competing, whoever it is.”

Pocic started 11 games as a rookie with the Seahawks in 2017 and saw action primarily at the guard positions in 2018 and 2019 before moving to center. He started 29 total games at center with Seattle.

Not bad for a player who turned his focus to center only when LSU had a need during spring workouts. Fortunately for Pocic, he enrolled early and was able to excel at the position.

“I always put 100 percent into it,” Pocic said. “You can’t do 105. It’s impossible. You’re always just doing 100 percent no matter what your opportunity is, so for me, it’s just go out there and compete really.”

Competing is not the only thing on Pocic’s mind as he prepares to work with the first-team offense.

Pocic signed with the Browns as a free agent because of line coach Bill Callahan, and has spent time in meetings and practice learning as much as possible to ready himself for any opportunity that comes his way.

“Oh, it’s been great,” Pocic said. “I’m just coming in with the approach to learn. Just learning day by day, one day at a time.

“I really just wanted to go play for a very established coach. Coach Callahan, I remember him when he was in Washington and he brought me in there for a visit. I’ve just seen his track record and stuff and talked to guys over the years.”

Callahan is an expert in the wide zone blocking scheme, and Pocic has also taken pointers from the linemen who have been in the system for the last three years. All-Pro left guard Joel Bitonio expects the transition to Pocic to be smooth.

“He’s an experienced guy, got a bunch of starts in his book,” Bitonio said. “He sits next to me in meetings, so we talk about calls and things like that. He has a lot of experience, he did pretty good when he got in the other day, and I think he’s ready for the opportunity.”

BLAST FROM THE PAST?

If the Browns have questions about Pocic or their interior depth, a free agent option is staring them in the face.

JC Tretter spent the last five seasons in Cleveland. Despite dealing with multiple injuries, most notably a high ankle sprain, Tretter did not miss a game until testing positive for COVID-19 late last year. He was cut in March to save $8.2 million in cash and salary cap space.

“There’s always other information out there, but from what I understand, I think he’s still a pretty good player in this league, and he played really well last year, and I think he’d make a team better if he’s on it,” Bitonio said. “I don’t know those conversations. They’re all above my pay grade. I think he’s a great player, and I think any team he’d go to he’d bring a level of professionalism to it.”

Tretter is president of the NFL Players Association and has been outspoken in his views on a lot of things. He encouraged teammates and players across the league to not participate in the voluntary portions of the offseason in 2021.

“I think when you have a guy that’s a top-five, top-10 center in the league and he’s not on a roster and he’s the NFLPA president, maybe some of the owners don’t appreciate what he brings to the table on certain topics where he’s trying to protect player safety and things of that nature,” Bitonio said. “It seems a little suspicious to me, but again, I don’t know what’s going on behind closed doors. But just from an outside perspective, usually players that are close to the top of their game get picked up. Teams want to win in this league, so it’s an interesting topic for sure.”

Cornerback Greg Newsome II didn’t practice after injuring his hamstring Tuesday. He worked on the side, and coach Kevin Stefanski said he won’t miss too many days.

“We are working through it. It will not be a long time,” Stefanski said.

The Browns are without their top two corners, as Pro Bowler Denzel Ward remains sidelined with a foot injury suffered June 16. Greedy Williams and A.J. Green worked with the starters Sunday.

** Defensive end Myles Garrett was excused from practice to attend to a personal matter.

** Rookie receiver David Bell, a third-round pick, didn’t play against the Jaguars as he continues to recover from a stress reaction in his foot. He returned to practice Aug. 6, and Stefanski said he’s “getting close” to being full go.

FOR THE KIDS AND FAMILIES

Bitonio hosted several families of kids with life-threatening conditions for practice in connection with A Kid Again Northern Ohio.

“They do adventures for the whole family,” Bitonio said. “So when a kid’s going through something like that, the parents, the brothers and sisters, the cousins and stuff go through it, too. It’s a tough situation.

“I just thought the Browns at football practice and seeing some of the guys would be pretty cool. Hopefully we can brighten some days and have a good time.”