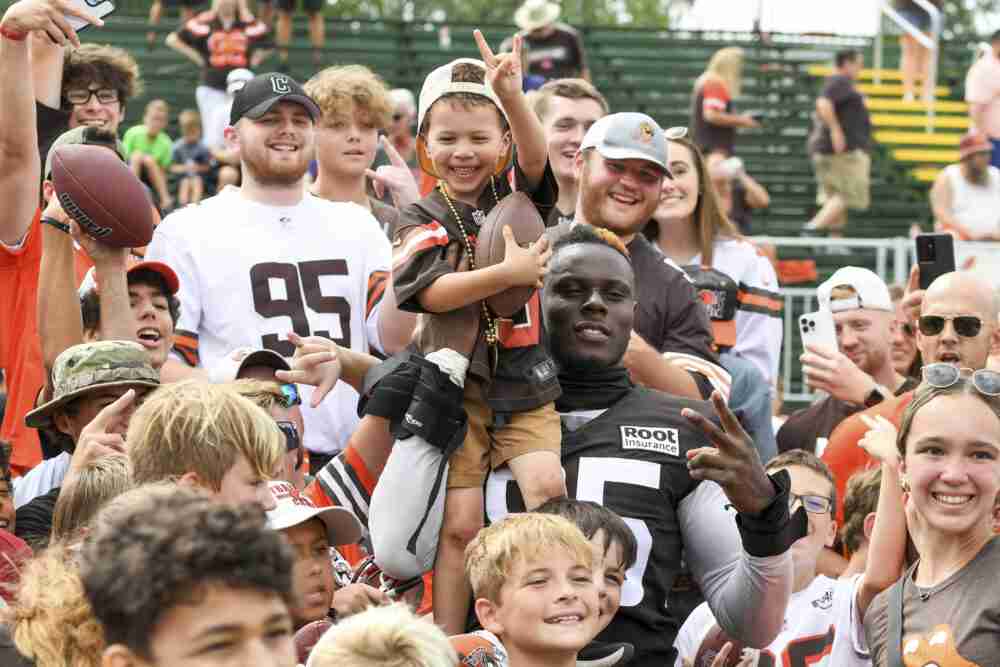 WHAT A CROWD: On the last day open to the public, coach Kevin Stefanski thanked the fans for coming to the 14 practices and the players signed autographs.

“The support has been unbelievable, which we really should not be surprised from our fans,” Stefanski said. “Every single day just having so many families out here and so may kids out here, it has been outstanding. Northeast Ohio, they love their Brownies, and we feel it when we are out here.”

NEWS OF THE DAY: Right tackle Jack Conklin participated in team drills for the first time since his patellar tendon tore Nov. 28 against the Ravens. He had been limited to individual drills since returning to practice.

CAMPER OF THE DAY: Kicker Cade York was voted the Maurice Bassett Award winner — given to the team’s top rookie in camp — then went 6-for-6 in a field goal drill with the long from 54 yards. He’s missed only two kicks since the start of camp.

The award, in honor of a running back who played for the Browns from 1954-56, is voted on by local media.

“He works hard at his craft,” Stefanski said. “Just understand that all of these rookies while they may flash here and earn that distinction, they have to continue to work.”

PLAY OF THE DAY: Undrafted rookie safety D’Anthony Bell is earning a reputation for making big plays. He added another highlight with his second pick-six of camp, stepping in front of a Josh Rosen pass over the middle intended for receiver David Bell and taking it the other way. D’Anthony Bell forced a fumble in the preseason opener.

QUOTE OF THE DAY: “Oh, yeah, we’ve got a bet out there. So looking forward to that game.” — Cornerback and Ohio State alum Denzel Ward, referring to linebacker and Notre Dame alum Jeremiah Owusu-Koramoah and the Buckeyes-Fighting Irish game Sept. 3.

WEDNESDAY’S SCHEDULE: The players are off. The Browns will practice against the Eagles on Thursday and Friday in Berea.