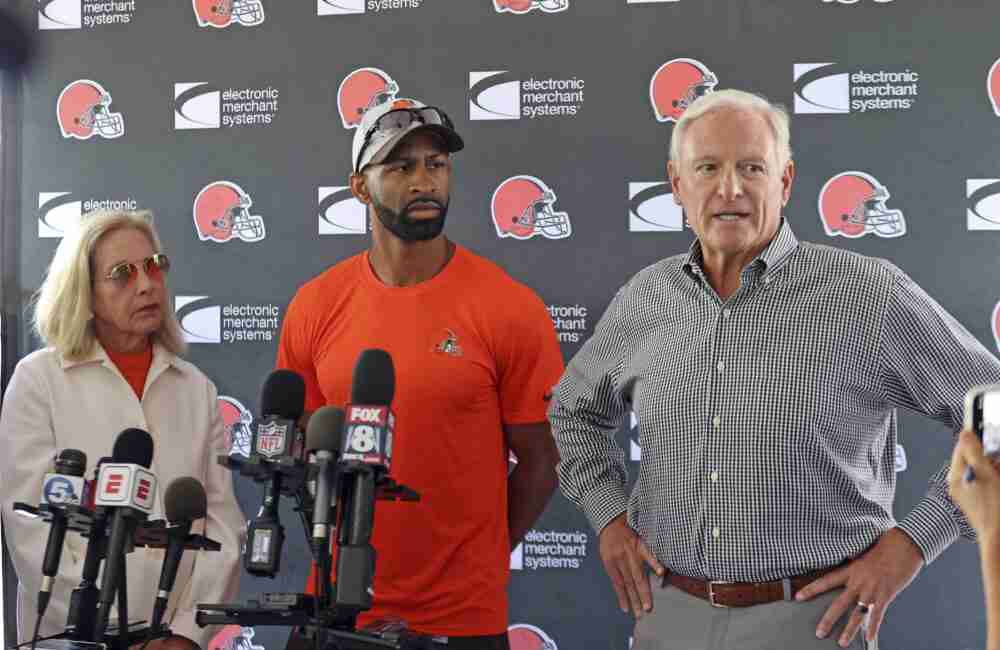 The NFL, the Browns and quarterback Deshaun Watson finally have resolution.

The NFL and Watson reached a settlement Thursday. He will be suspended for 11 games without pay, fined $5 million and promptly undergo professional evaluation by behavioral experts and follow their treatment program.

He’ll be eligible to play Dec. 4 at Houston, which is the team that drafted him and traded him to the Browns in March. The Texans settled 30 civil lawsuits in July accusing them of being aware of and enabling Watson’s behavior.


Jacoby Brissett is set to replace Watson in the starting lineup.

“I’m grateful that the disciplinary process has ended and extremely appreciative of the tremendous support I have received throughout my short time with the Browns organization,” Watson said in a statement. “I apologize once again for any pain this situation has caused. I take accountability for the decisions I made. My focus going forward is on working to become the best version of myself on and off the field and supporting my teammates however possible while I’m away from the team. I’m excited about what the future holds for me in Cleveland.”

The league investigated Watson for more than a year regarding accusations of sexual misconduct during massage therapy appointments from more than two dozen women. Watson had denied all wrongdoing until an apology Friday.

The league sought an indefinite suspension of at least a season, while the NFL Players Association initially argued for no punishment. Independent arbitrator Sue L. Robinson handed down a six-game suspension Aug. 1, but the NFL appealed Aug. 3.

Commissioner Roger Goodell appointed former New Jersey attorney general Peter C. Harvey to rule on the appeal, and his decision was supposed to be “expedited.” The settlement takes the place of Harvey’s ruling and preempts the possibility of a federal lawsuit from the NFLPA.

“Deshaun has committed to doing the hard work on himself that is necessary for his return to the NFL,” Goodell said in a statement. “This settlement requires compliance with a professional evaluation and treatment plan, a significant fine, and a more substantial suspension. We are grateful to Judge Robinson and Peter Harvey for their efforts in addressing these matters, which laid the foundation for reaching this conclusion.”

Harvey appeared to wait to issue a decision so the NFL and Watson could agree on the terms of the punishment. The sides had been unable to reach a settlement throughout the process.

“As we have previously conveyed, Deshaun and his representatives have abided by the NFL and NFLPA structure awaiting a final decision and we have respected the process,” owners Dee and Jimmy Haslam said in a statement. “Now that a decision on discipline has been reached, we understand this is a real opportunity to create meaningful change and we are committed to investing in programs in Northeast Ohio that will educate our youth regarding awareness, understanding, and most importantly, prevention of sexual misconduct and the many underlying causes of such behavior. Since Deshaun entered our building, he has been an outstanding member of our organization and shown a true dedication to working on himself both on and off the field. We will continue to support him as he focuses on earning the trust of our community.”

Watson, 26, is allowed to continue practicing and playing in the preseason, with the suspension starting the first week of the regular season.

Watson, 26, is allowed to continue practicing and playing in the preseason, but coach Kevin Stefanski said he’d sit out the final two preseason games. The suspension starts Aug. 30 with the regular-season roster cutdown. He’s allowed to return to the team facility halfway through the suspension and be reinstated Nov. 28.

The settlement came days after Watson started the preseason opener against the Jaguars on Friday in Jacksonville, Florida. He was 1-for-5 for 7 yards in his first game action since Jan. 3, 2021.

Watson was originally suspended without pay for six games in a 16-page decision from Robinson, a former federal judge jointly appointed by the NFL and NFLPA.

The league used its collectively bargained right to appeal, filing its brief Aug. 3. The NFLPA filed its response Aug. 5.

According to the CBA signed in 2020, Goodell or a designee makes the ruling on appeal.

Watson wasn’t indicted by two Texas grand juries and settled 23 of 24 civil lawsuits. Robinson cited a lack of remorse in her ruling, and before the game Friday night Watson offered his first apology in a short interview with a member of the team’s preseason TV broadcast crew.

“Look, I want to say that I’m truly sorry to all of the women that I have impacted in this situation,” said Watson, who previously insisted he’d never assaulted, harassed or disrespected a woman. “The decisions that I made in my life that put me in this position I would definitely like to have back, but I want to continue to move forward and grow and learn and show that I am a true person of character and I am going to keep pushing forward.”

Robinson found the NFL proved its case that he violated three provisions of the conduct policy — sexual assault as defined by the NFL, posing a genuine danger to the safety and well-being of another and undermining or putting at risk the integrity of the league.

The NFL chose to appeal Robinson’s first decision in the role because it felt the punishment was too lenient. It argued in the original case and the appeal that Watson should be indefinitely suspended for at least a season. In the appeal, it also sought a fine and for Watson to seek treatment.

“Because we’ve seen the evidence,” Goodell told reporters last week at the league meetings in Minnesota. “She was very clear about the evidence. She reinforced the evidence, that there was multiple violations here and they were egregious, and that it was predatory behavior.

“Those were always things we felt was really important for us to address and in a way that’s responsible.”

The settlement landed at a spot both sides found acceptable.

The league won’t risk a protracted lawsuit with an indefinite suspension and the continuation of a story that has dominated headlines and cast it in a bad light. Watson guarantees he’ll be able to play this season and his contract won’t toll.

The fully guaranteed five-year, $230 million contract runs through 2026. Under a full-season suspension, the contract would’ve been pushed back a year.

Watson will forfeit $632,500 in game checks during the suspension in addition to the $5 million fine.

The Browns acquired Watson on March 18 in a trade with the Texans. The Browns sent a net of five draft picks to Houston, including three first-rounders.

The first year of the deal was structured to pay Watson $45 million in a signing bonus and $1.035 million in base salary. Under the six-game suspension from Robinson, Watson would’ve lost only $345,000.

It’s common for the Browns to pay only the league minimum in the first year of a long-term deal to help manage the salary cap, but because of Watson’s situation when they traded for him, it bothered some in the league that a suspension wouldn’t cost him much money.

Watson had taken the vast majority of the first-team reps in practice until Sunday as Stefanski wanted to prepare him to play while waiting for resolution with the suspension. Stefanski transitioned this week to getting Brissett ready for the season opener Sept. 11 against Carolina by giving him the majority of the starter snaps. Watson continues to take a few with the first team and a lot with the backups.

Stefanski said starting next week Brissett will get nearly all the first-team reps and Watson would do most of his work on the side and not in team drills.

The Browns have Josh Dobbs and Josh Rosen behind Brissett and could feel the need to add a quarterback with starting experience. The 49ers are looking to trade Jimmy Garoppolo, who took them to a Super Bowl and an NFC championship game.

Watson is a three-time Pro Bowler and led the NFL in passing yards in 2020, the last time he played. The Browns deemed him a significant upgrade of Baker Mayfield but won’t get to see him on the field when it counts until December.