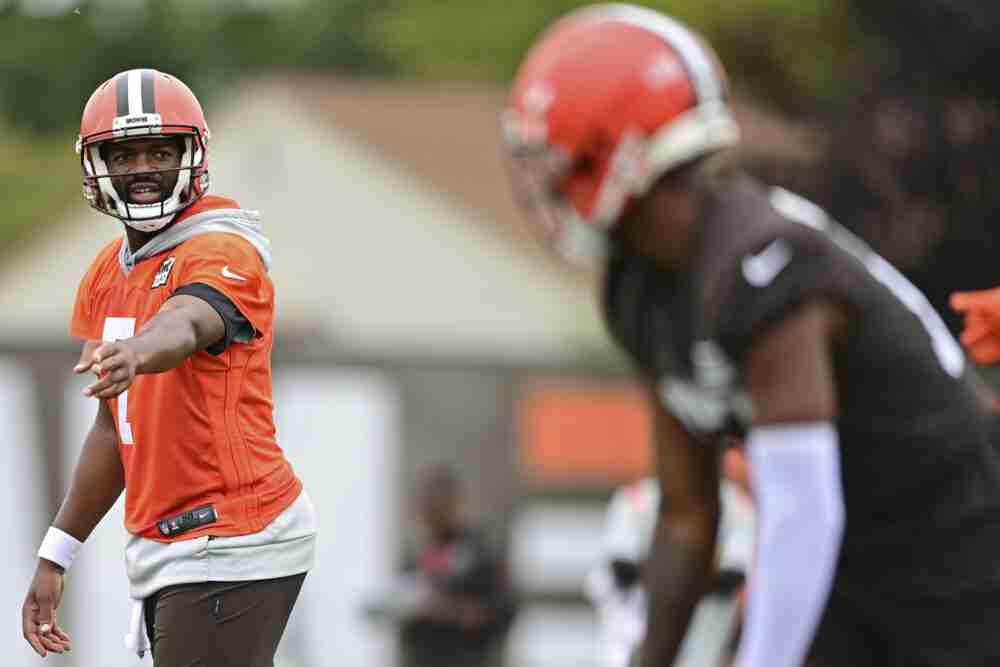 Q: Do you think teams will load the box like they did last year and dare the Browns to throw again? If so, do you think Jacoby Brissett is good enough to beat that if they do?

A: I have no doubt defenses will do just that. They did it last year vs. Baker Mayfield and will do it again vs. Brissett. Until proven otherwise — and don’t count on it anytime soon — the running game is the clear strength of the Cleveland offense. Defenses would be negligent to focus their attention and resources anywhere else.


And the scouting report on Brissett is he doesn’t stretch the field, preferring shorter, safer throws. So that could compress the field even further.

It’s up to coach and play caller Kevin Stefanski and Brissett to not let that combination become debilitating to the offense. Brissett has the arm to keep defenses honest but must show the willingness to take a few chances. Until that happens, expect a lot of close, low-scoring games.

Q:
Is it at all possible that general manager Andrew Berry & coach Kevin Stefanski are sitting with Jimmy & Dee Haslam right now saying, “We told you this would be a disastrous circus and you didn’t listen,” because I have a hard time believing GM and coach would really sign up for the PR nightmare that accompanied the trade for quarterback Deshaun Watson.

A: I doubt those are the exact words, but that type of conversation is certainly something I’ve thought about.

The acquisition of Watson wouldn’t have happened without the full approval of the Haslams. They have final say and write the checks. What’s less clear is how much Berry and Stefanski wanted to take on everything that accompanied Watson. Berry and Stefanski have said nothing publicly to indicate they weren’t on board, but I have a hard time believing there weren’t people somewhere in the organization who fought against the move. Those people couldn’t have liked what they saw in the news conferences Thursday.

Q: Aside from being a core special teamer, a backup tight end, an H-back, and the only fullback, isn’t Johnny Stanton IV a lock to make the roster because he’d also be the emergency quarterback? With Jarvis Landry gone, who would serve as the third gameday active who’d be capable of playing QB (assuming only two signal caller roster spots, as has been Andrew Berry’s MO?)

A: I’d stop short of “lock” but agree Stanton is in great position to make the roster given his versality and ability to play fullback. Stefanski has moved away from a ton of fullback usage but isn’t ready to abandon it completely. As evidence, I was surprised to see Stanton play about a dozen snaps at fullback against the Jaguars.

Your quarterback point is interesting and could break any ties. While the roster has other guys who played quarterback in high school, Stanton’s experience at the college level is a separator.

Q: During these last few months I found myself questioning why I root for a team just because they happen to be from the area I grew up in, but the roots of my support go so deep I cannot abandon the Browns. However, during these last few years I was secretly joyful the 0-16 parade took place and if the Browns happen to lose the season opener, I won’t feel anywhere near the usual depression over a Browns loss, something I never imagined I’d say. How much more damage can the Browns brand endure before folks decide to enjoy other alternatives on Sundays?

A: This topic is too deep and layered to address completely here. But I’ll hit a few points.

Every fan is unique, so I think the breaking point is different for everyone. Especially for a fan base more divided than ever, with the reaction to Baker Mayfield, Deshaun Watson and so much more going beyond passionate to personal and oftentimes offensive. However, I believe winning would still unite the fans — with some notable exceptions whom I believe when they say they’re done because of Watson. And if people are still rooting for the Browns after all the losing and the Watson acquisition, I don’t see anything stopping their loyalty.

But for those drifting away, today’s world is so busy and filled with so many alternative ways to spend one’s time, it’s easier for interest to fade.

As for your first point, I believe geography should be the biggest factor in a person’s fandom. I have no good reason for that, it just seems right to me.

Q: The Jimmy Garoppolo contract angle is widely misunderstood. Yes, Jimmy GQ is due $24.2 million in new money plus per game active bonuses. No, he will not earn anywhere near that this season (unless perhaps a team without any manner of established backup suffers a starting QB injury, and even then he’s unlikely to get anyone to bid close to the top of that).The reason for the above is the non-guaranteed nature of Jimmy’s contract — which also happens to be the reason why his opinion counts, as far as where he goes. The 49ers can’t force him to take less money just so they can offload him. Garoppolo will have to agree to rework the money in order to facilitate a trade, thus giving him a substantial measure of control in terms of destination.The Browns could probably get him for a 2023/2024 sixth-round pick as it keeps getting later in the program. SF has no 2023 sixth; CLE has two 2024 sixths. With the Niners having little leverage, they might even give back a seventh (SF has two in 2023); his value will continue to go down unless an injury occurs elsewhere.

A: You added more specific contract information in your email, with your conclusion being the Browns make the most sense for Garoppolo. I agree and wrote about that this weekend.

Berry doesn’t appear willing to absorb Garoppolo’s current contract, as you mentioned, so he’d have to get Garoppolo to agree to a restructuring or wait until he’s cut by the 49ers, then win any recruiting battle. While adding Garoppolo makes perfect sense to me — Brissett isn’t a true No. 1 and his backups are highly questionable — the Browns have a high opinion of Brissett. I don’t think they’ve ruled out adding Garoppolo but need the circumstances to be right.

Q: Is Jedrick Wills Jr. at risk of losing his starting job to Alex Taylor?

Wills was the No. 10 pick only two years ago, has the physical tools necessary to succeed at the premium left tackle position and the coaches expect a big jump from him this season. I also think Chris Hubbard and James Hudson III would be the replacements before Taylor.

Having said all that, I get the question and its timing. Wills sat out the last drill Thursday against the Eagles after getting banged up, and Taylor took his spot. Taylor also replaced him Friday after a Wills meltdown that can’t be ignored.

Wills appeared to be called for three straight penalties in a two-minute drill and was yanked by Stefanski. Wills didn’t react well — either to the flags, the benching or both — and threw his helmet along the ground then stomped toward the sideline. A couple of teammates and line coach Bill Callahan eventually calmed him down.

The situation deserves monitoring, but I fully expect Wills to be the starter all season.

Mailbag: Who’s stood out, fallen behind at training camp? Can defense carry team without Deshaun Watson?
Mailbag: What will Browns do in the crowded running back room?