Mailbag: What will Browns do in the crowded running back room? 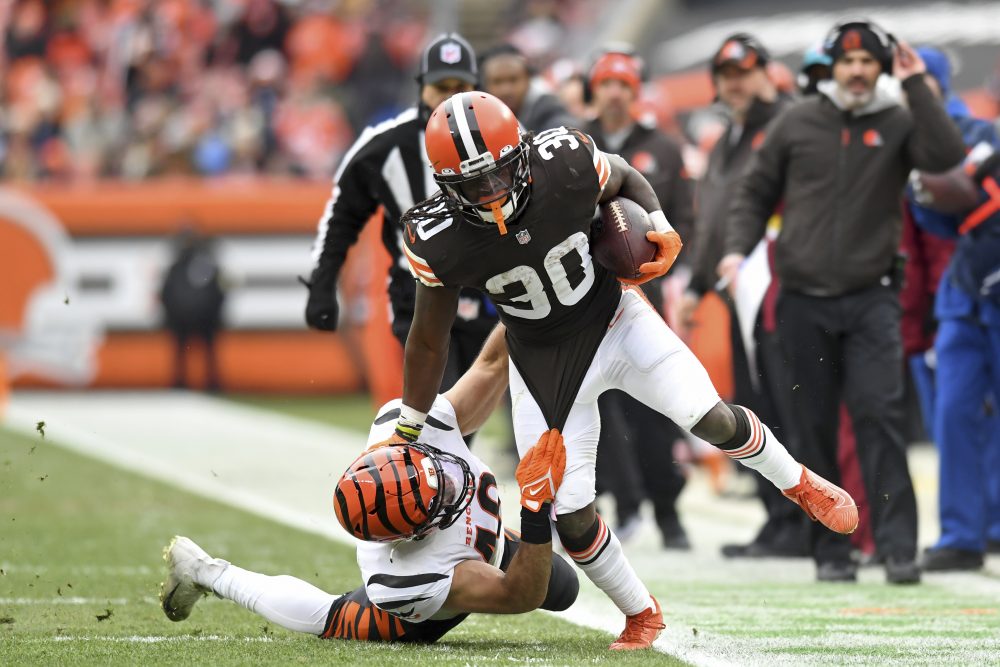 Q: Who do you think is the odd man out in the RB room?

A: I assume you don’t mean John Kelly Jr., who could wind up on the practice squad but not the 53-man roster.

As for the other four: Nick Chubb, Kareem Hunt, D’Ernest Johnson and Jerome Ford, I think they will all make the team, unless …


And it’s a big unless. I’ve been saying it since before training camp started, I think Johnson will be traded before the roster is cut to 53 by Tuesday afternoon.

Denmark’s Hjalte Froholdt has been all over America, looking to stick in Cleveland

The drafting of Ford and his strong play throughout camp and the preseason made Johnson expendable. And with Johnson entering the final year of his contract, it makes sense for general manager Andrew Berry to shop him in pursuit of an upgrade at a different position (read: receiver) or a late-round draft pick.

But if Berry can’t find a trade partner, I think he’d keep all four and retain the position of strength.

Q: Supposedly, coach Kevin Stefanski is leaving most heavy TE sets because of Deshaun Watson. But Jacoby Brissett could really need those sets. Do you expect those to remain in place for Brissett and then the offense changes midseason on Watson’s return?

I don’t want to focus too much on the use of tight ends, although there’s no doubt the three-tight end sets will decrease this year. But from an overall game plan perspective, I definitely expect it to look a lot like last year with Brissett at the helm. That means a lot of runs and short passes. Not only does that play to the strengths of the team, it also suits Brissett’s style.

So I don’t expect to see the significant changes I expected to be put into place until Watson returns. Then we’ll see more run-pass options, designed quarterback runs, three-receiver sets and deep throws.

Getting back to the tight ends for a second, David Njoku and Harrison Bryant could be favorite targets of Brissett.

Q: If the Browns go looking for another veteran receiver, what does that say about the team’s confidence in Donovan Peoples-Jones and the rest of the receiving corps?

A: That the confidence isn’t high enough entering the season. I think that would be justified.

It’s not as much an indictment of Peoples-Jones as the rest of the group, namely Anthony Schwartz and David Bell, plus Jakeem Grant Sr.’s season-ending injury. No one has emerged behind Amari Cooper and Peoples-Jones.

I believe the Browns have a lot of faith in Peoples-Jones, but he’s never entered the season as a true starter, so it wouldn’t be the worst thing to add more experience beyond Cooper.

Q: Why haven’t the Browns ever gone to a FieldTurf?? By November they’re playing on green painted dirt?

A: It’s all about tradition. Plenty of Northeast Ohioans believe football should be played outside and on grass. And I think the Haslams have chosen to honor that.

That could change at some point.

Q: What numbers should we Browns fans use to judge the effectiveness of Browns management during the coming season? Wins are the obvious answer, but I’m already imagining Jimmy Haslam handing out mulligans in 2022 regardless of how many wins the team has. For example, could the number of games won by Baker Mayfield as QB of the Panthers establish a floor for the minimum number of wins that are acceptable for the Browns in 2022? Are there other key measures?

A: These are really interesting questions. I do like the Mayfield metric, although Watson’s absence for 11 games obviously skews any comparison.

But I’m not willing to make any assumptions about this season and its potential ramifications. I understand the idea of a mulligan, but I’m not sure the Haslams roll like that, especially if things get really bad on the field.

If I’m forced to give you some measures, I’d focus on the passing game. The Browns’ No. 1 priority in the offseason was to improve the passing game after the struggles of 2021, and the Haslams could expect it to be better even without Watson for 11 games. The other area that jumps to mind is the defense. The Browns have invested a lot, and the players have talked a lot, so anything outside of a top-10 finish would be a huge disappointment.

Q: How important is it for Brissett to have a good game tonight?

A: I may be in the minority, but I don’t think it’s that important. Brissett is 29 years old and has played a lot in the NFL, so I refuse to place too much on 10-20 snaps in a game that doesn’t matter.

Jacoby Brissett, most of starters will play Saturday in preseason finale

The keys for the outing to be a success for Brissett is for him to stay healthy and run the offense smoothly. No penalties, wasted timeouts or turnovers. Throw in a scoring drive, and it would be a big win.

I’d be reluctant to play him at all given the quarterback situation and risk of injury but understand Stefanski wanting to get him some reps in a game setting.

A: Just for clarification, they can’t go on the PUP list because they didn’t begin training camp on it. The option is short-term injured reserve, which would require them to be on the initial 53-man roster. Then they’d be placed on IR and have to miss at least four games.

I think that’s the likely landing spot for Woods. The Browns don’t want to place him on season-ending IR before Tuesday or risk putting him on the waiver wire in an attempt to get him through to the practice squad. But he won’t be ready to contribute in September after missing weeks with a hamstring injury.

Thomas returned to practice this week with his hand in some type of cast and I think he’ll make and stay on the 53-man roster.

I also expect Rochell to make the team as a fifth end, with Chase Winovich getting cut.

Q: Any of the defense starters going to play tonight?

A: The team hasn’t announced it yet. But I’d expect the defensive tackles, linebackers and maybe safeties to start.